Hu Hsu, the only Chinese man at the Aurobindo Ashram in Puducherry, spent his life immersed in Indian philosophy and translated Gita, Upanishads and Aurobindo’s works.

In the late 1960s, Hu Hsu, the only Chinese man at Aurobindo Ashram, would often be spotted cycling around Puducherry with a “peculiar green sunshade”, like a Las Vegas croupier. A philosopher and Indologist who later came to be known as Xu Fancheng, he spent 27 years (1951-78) in the ashram — for the most part penniless, meticulously translating several of India’s classical Sanskrit texts and modern writing, including the Bhagavad Gita, Upanishads and Sri Aurobindo’s works into Mandarin. This was at a time when there was no market for it back home in China.

Hu’s collected works, published only after his death in 2000, show that apart from being a translator of Indian philosophical works, he wrote extensively about a range of issues like Confucianism and Buddhism. “After 2006, when the collected works came out, there was a massive interest in Sri Aurobindo’s works because of Hu Hsu,” says Devdip Ganguli, a faculty member at Sri Aurobindo International Centre of Education. “This interest is primarily at Chinese universities and it is only growing.”

On occasion, Hu would spend time on his verandah on Rue Dumas playing Go, a board game, over strong black tea with his companions. “Our conversation with Hu Hsu, if any, was almost exclusively about Go, yet it went much beyond the game itself…” wrote one of his friends in a special newsletter to mark Hu’s demise in 2000. “Hu Hsu never tried to wipe us off the board, as he could easily have done in the beginning when we were still learning, for his ideal was “to win by one stone”, that is, to find an equilibrium”.

At the ashram, Hu also left behind 300 of his paintings, which were scrutinised decades later by a group of visiting scholars from China in early January this year. With 2020 marking 70 years of diplomatic ties between India and China, New York University Shanghai’s professor of history Tansen Sen and his colleagues spent an afternoon in Ganguli’s office, browsing through digital copies of several of Hu’s paintings — many of them gifts to Mirra Alfassa (known as the Mother) at the ashram.

While an exhibition in memory of Hu was held in the ashram in 2018, Sen’s quest is to highlight little-known artistic interactions that took place between the two countries between the 1930s and ’40s. As reported by this newspaper in November 2019, Sen, along with his colleague Wang Yizhu, was instrumental in displaying 60 paintings of another not-so-well-known Chinese artist Chang Xiufeng at the Peking University in Beijing. Chang went to Santiniketan in 1947 to study painting under the famous Indian artist Nandalal Bose and remained in India for 14 years. 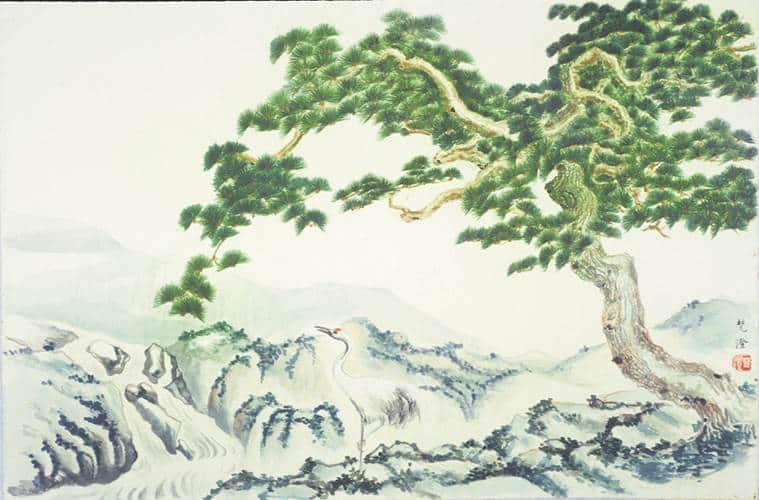 “The interaction between Xu Fancheng and the Mother is quite detailed. Her death appears to have influenced his decision to leave India,” Sen says in his interaction with Ganguli. A newsletter published by the Sri Aurobindo Society in Singapore after Hu’s death in 2000 shows a photograph of him, taken in May 1967, in front of his paintings with the Alfassa’s words below: “Here are the paintings of a scholar who is at once an artist and a yogi.”

Ganguli’s interest in Hu’s works was fortuitous when a Chinese man moved by Aurobindo’s works visited the ashram after the launch of the collected works. “Three years after the collected works was published, the first Chinese visitors began coming to the ashram,” he says. Later, Ganguli found himself visiting Hu’s apartment in Beijing. It happened to be the 100th birth anniversary of the scholar.

Hu was born in Changsha in 1909 in a well-to-do family, says Ganguli. “Mao Zedong was his geography teacher in school though there was no connection between the two after that.” Later, due to interactions with Chinese writer Lu Xun, Hu travelled to India on a quest to learn and translate Sanskrit texts. “This was probably because China was at a stage where there was a feeling that you must connect with other countries in the world. There was a growing movement of Pan-Asianism,” Ganguli says.

After his stints in Santiniketan and in Varanasi learning Sanskrit, Hu moved to south India where he lived for nearly three decades. “He didn’t have any money and was entirely supported by the ashram and the Mother,” says Ganguli. “The Mother started to arrange the printing of the book he had translated at a time when there was no market for it. At that time, he was in dire financial need. She took care of everything — from his food and housing to printing his books,” he adds. Alfassa died in 1973, and Hu left India five years later.

Educated in Chinese and Greek classics at home, Hu spent years studying Indian philosophy and teaching. After his return to Beijing, he had two decades of writing ahead of him.

Nine years after he passed away, an article about Hu in China Daily quoted him: “In a way, the destiny of mankind has been determined by the philosophies of ancient Greece, India and China, each with its genuine and independent roots. Without those, neither the Eastern civilisations nor that of the West can be thinkable. If there is any meaning of academic research, and if it is to provide any useful service to mankind, then it must be to prepare for the coming of a great future — by revisiting the profound lessons of the past.”