Srinagar: Authorities in Kashmir are asking civil society activists and political detainees to provide a written assurance that they won’t disturb the peace in exchange for release from detention.

Although government officials claimed that they have released some lower-rung political activists, most of the politicians including former chief ministers, Omar Abdullah and Mehbooba Mufti, continue to remain in detention. In a written permission slip to allow the family of RTI activist, Raja Muzafar Bhat, to meet him at Sher-i-Kashmir International Conference Centre (SKICC) sub-jail in Srinagar, a magistrate has disclosed that he was detained under section 107/151 of the Code of Criminal Procedure (CrPC) vide order dated 10 August.

Other political leaders have been detained under the same provisions of the CrPC, while some have also been arrested under the Public Safety Act (PSA).

A senior official said that the 107/151 CrPc provisions are invoked against people if they are seen to be a “threat to peace”. “We have also detained some stone-pelters under the same provisions of the CrPC,” he added. However, even as officials admitted that political detainees can’t be kept in custody for a long time under 107/151 CrPC and can be released by furnishing a “bond” to a magistrate, many who are authorised to sign release orders said that they can’t do that in the absence of “directions” for release from those higher up. 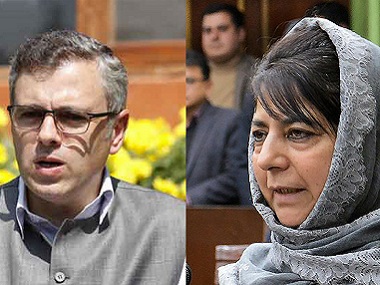 A magistrate posted at Chadoora in Budgam said that the “release of political detainees” has to follow after their “presence is secured before our office, but it is not happening as the situation was grim”.

Many senior leaders including the Abdullah and Mehbooba have been detained and have been treated as being in “judicial custody”. Others including former minister and Peoples Conference leader, Sajad Gani Lone, as well as IAS topper-turned-politician, Shah Faesal, have also been detained.

Outside one of the sub-jails in Srinagar’s Centaur Hotel, families are seen to be making a beeline and have filed applications to seek entry into the premises. “We detained many people to maintain peace, but we have also released many others. Many politicians are still in judicial custody,” said Additional Director-General of Police Muneer Khan. Deputy Commissioner Kupwara, Anshul Garg, said that after the situation improved in the border district, they have also released some political activists. In the district, he said that at least 24 PSA cases have been filed including some against political activists since 5 August 5, when the authorities scrapped Article 370 that disallowed outsiders from owning property in the state.

“The release and arrest is a dynamic process. We are releasing people after they furnish a bond that the peace will be maintained,” he said.

In the written application filed by the family of Bhat before the magistrate, it has given an assurance that “respectable persons are ready to furnish a surety bond on behalf of the said detained person for securing his presence in court and for keeping peace and tranquility”.

His father, Bashir Ahmad Bhat, said that although the magistrate sought a report from the Station House Officer (SHO) in the matter, he didn’t pursue the case with the police as the cops could have “framed my son in some other case”.

“Keeping a person under preventive detention for nearly a month is not justice,” he said. Bashir said that his son was arrested even though he had not been associated with any political party and was only a “civil society activist”. Source: https://www.firstpost.com/india/month-after-kashmir-lockdown-began-detained-activists-and-politicians-free-to-go-as-long-as-they-promise-not-to-disturb-the-peace-7287311.html