J&K: Assurance from the Union government would assuage the hurt feelings of Kashmiris

The provocative speech of Imran Khan at the UN General Assembly closely on the heels of abrogation of Article 370 in Jammu and Kashmir seems to have acted like a fuel to the fire for locals. Khan’s speech has emboldened the separatist elements in Kashmir and restoring normalcy in Kashmir remains a major challenge for the administration and would need a deft handling.

Two major concerns in the psyche of a sizeable section of people in Kashmir are: firstly, downgrading the status of a major state in India to a Union Territory and secondly, apprehension related to the protection of their land.

Downsizing the status of Jammu and Kashmir to Union Territory came as a rude shock to Kashmiris. Union Home Minister Amit Shah, in his statement in the Parliament in August, had assured restoration of its status as a state in course of time. A reiteration of this assurance at an appropriate level from the Union government would assuage the hurt feelings of Kashmiris to some extent. Similarly, allaying apprehensions related to land protection issue is important too — an assurance from senior political leadership in Delhi that there will be no arbitrary moves could help matters. 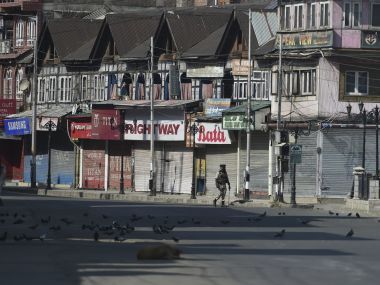 A file image of shutdown market place in Srinagar in September. AFP

Another chronic problem in the state has been the issue of misgovernance. The efforts of Jammu and Kashmir police and other security forces need to be supplemented with visible pro-active initiatives by the bureaucracy aimed at providing a clean and efficient governance sensitive to the needs of the people upto the grassroots level. The endeavours of the Jammu and Kashmir police, since the Centre abrogated Article 370, has been tremendous.

Another major irritant for a common Kashmiri is the clampdown on all communication links. Complete blockage of all communication channels is not only adding to the hardships and anger of local population, but is also being viewed adversely abroad as a major issue of human rights violation denting the image of the country. To start with, the state machinery can opt for a more gradual and well-calibrated relaxation and allowing postpaid mobile phones to function.

Contrary to the general impression in the country, all separatists are not pro-Pakistan or anti-India. Even within the Hurriyat, Professor Abdul Gani Bhatt has generally taken a balanced stand. It may be relevant to appreciate that in the current surcharged situation, any call given by separatists will have greater credence. As such, it would be desirable to identify moderate separatists and maintain some sort of communication link with them aimed at enlisting their support to restore normalcy in the state.

For national interest in the long term, it will be equally important to launch a well-planned initiative to identify positive-thinking young people with political aspirations and provide encouragement and support to them to build their career as future political leaders in the state.

Keeping in view the sensitivity of Kashmiris and their self pride in ‘Kasmiriyat’, the situation has to be handled in a subtle manner ensuring that Kashmiris are not made to suffer a sense of defeat.

A pro-active initiative on the part of the local administration is called for to provide a genuine sense of normalcy in the valley by ensuring opening of all the shops and business establishments. There is no doubt that there will be a reaction by the people whenever this is done. But it is already two months now and longer it is delayed, the greater the anger of people.

It would be of utmost importance that in handling the law and order situation to restore normalcy in the state, utmost care is taken by the law enforcing agency to avoid any casualty or pellet injuries, particularly to children as this has a snow balling effect.

There has been repeated assurances from the Union government that this move will bring economic development, job opportunities and prosperity in the state. The statement of Shah that Jammu and Kashmir will become one of the top most developed states in 10 years may be very reassuring. But the government has to walk the talk to carry the support of the people.

Previous (India) Hindu family set to venerate Muslim girl for Kumari Puja; Durga has no caste, creed or religion
Next J&K: If children can go for tuitions, why not to schools?