By comparison, Jammu and Kashmir is currently undergoing relative stability after a fairly tumultuous situation during late winter and early spring. Experience from the past reveals that traditionally when the durbar returns to Srinagar in May, it is the time when the race for infiltration of terrorists from Pakistan-occupied-Kashmir into the Kashmir Valley picks up momentum.

The launch pads are usually terrorists awaiting opportunities to infiltrate after the winter has stood in their way; carrying out a recce to discern areas where the vigil is comparatively lower or change of Indian Army units has taken place. It is also the time when snow levels at the Shamshabari Range are considerably reduced, the snow in high altitude areas is harder and easier to tread and importantly the Anti-Infiltration Obstacle System (AIOS) is relatively less effective having borne the weight of heavy volumes of snow through the winter.

It’s a time when the Indian Army’s counter-infiltration grid gets into a state of high energy to neutralise the disadvantages it faces. However, despite all the advantages that infiltrating terrorists may enjoy, there have been no major encounters on that grid this year. Post Pulwama terror attack, the counter-terrorism grid deeper in the hinterland has had some good success against Jaish-e-Mohammad (JeM) thus communicating the efficiency of the Indian security forces in taking out both the perpetrators of the Pulwama outrage and their leadership. 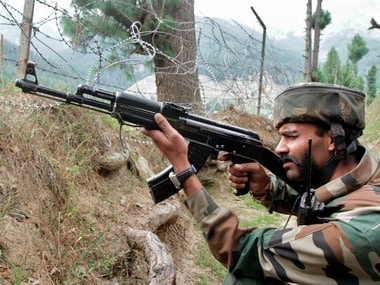 When bereft of effective leadership, foreign terrorists usually signal back to the sponsors of proxy war across the Line of Control for fresh induction and efforts are made to rekindle terrorist effectiveness through infiltration in larger groups. It’s done with the hope that even with some attrition the fresh leadership will get through intact. Jamaat-ud-Dawa leader Hafiz Sayeed himself is known to have roamed the Nilam Valley for a number of days some years ago while conveying his thoughts and ideas on mass infiltration irrespective of the attrition that would inevitably follow. In such ventures, human life has little value.

Currently none of the above is happening.

However, the Lok Sabha elections are underway although the usual excitement level of Assembly elections do not seem to be reflecting in the parliamentary polls. The turnout figures are not very encouraging especially in the Shopian, Kulgam and Pulwama areas which is the central region for current militancy activity. There have been reports of stone pelting and some protests on the streets of South Kashmir but not of the intensity which makes people in Delhi sit up. Targeted killings, however, have been witnessed, the latest being of the Kashmiri BJP leader Ghulam Mohammad Pir in Verinag.

The Line of Control is a different domain altogether when viewed detached from the counter-infiltration grid. Without going into extensive statistics the post-Pulwama situation witnessed large scale ceasefire violations by the Pakistan army which were more than effectively responded to by the Indian Army. There have been reports of absence of any actions by Pakistan’s Border Action Teams (BATs) although a few weeks ago reports did indicate a general alert against sporadic acts by BATs.

Tactical actions at the ground level by our troops, always keep the adversary on the defensive. However, the LoC is a dangerous place where in the last six months there has been a surge in casualties due to sniper fire from Pakistan. Although this too has reduced, the Indian Army’s response was hardly reported in the media; improvisation was effective until the new equipment started to arrive and training in earnest began with most being on the job itself.

Some analysts are reading the situation as one of Pakistan holding back its usual activities since it is under intense pressure from the international community to demonstrate its resolve to put curbs on sponsorship of terrorist organisations. However, we need to just remember that a full-scale deterioration of the situation, on the LoC, the counter-infiltration grid or in the counter-terrorism and street turbulence domains could be just one incident away, awaiting a potential trigger.

Pakistan has come under pressure in the past too; post 26/11 we did not witness any deterioration in the situation but the environment then was different; India and Pakistan were yet in engagement mode. Similarly, 2011 saw relative calm after a turbulent 2010 when agitation became the prime mode of proxy activity. The assessment then pointed to the weariness of the population to the long shutdowns and Pakistan’s perception of potentially losing the narrative to that.

Some of the factors playing on the minds of the Pakistan leadership and the deep state could include a potential dilution in support from China; something which appears to have been conveyed to Prime Minister Imran Khan during the recent Belt and Road Initiative (BRI) summit. China’s changed stance on the Masood Azhar issue could be reinforced by the likelihood of the withholding of financial support by the West and the potential negative reports from the Financial Assistance Task Force (FATF) deliberations. All of the latter would once again put pressure on China to continue financial bailouts of Pakistan, something which cannot go on interminably especially in the face of mounting pressure from Washington on trade-related issues. China’s virtual capitulation on Iran oil is a standout example.

Bravado in words appears to characterise Pakistan’s post-Balakot stance with a perception prevailing that it has proven that below the threshold of conventional showdown it can match India in any military way. However, there can be no guarantee for Pakistan that an event involving a terror act will not cross the threshold. Besides that, the Balakote strike did come as a surprise. Now, that the escalatory ladder has spiraled to a higher level the next crossing of the threshold could draw another even more unpredictable Indian response than an IAF strike on terror infrastructure.

A cooling off period is, therefore, perceived to be mandated. Pakistan probably assesses that alienation levels on which the deep state has worked for the last five years or so are at high and local terrorists are sufficient in numbers with an available pipeline for reinforcement, should the need arise. Besides, the electoral turnout could be perceived to be indicative that nothing may change so drastically with such cooling. The tourist season too remains blank thus far and may not recover sufficiently to create positivity in the environment.

All the above are aspects of assessment on the basis of past trends and current inputs. However, the next spectacular act could be around the corner since predictability is obviously low in such an environment. Pakistan may yet throw caution to the winds and plan something which it thinks it can handle with the international community and its all-weather partner China. Yet India while keeping up its guard at the LoC, in counter infiltration and the counter-terror grid needs to grab the opportunity under the new government to create fresh initiatives as was done in 2011 when it exploited the tactical break.

Since its strategy remains open-ended without conflict termination or resolution in mind, Pakistan has now experienced that the Indian response to every fresh sub-strategy and trigger is first in the robust and muscular domain which results in India receiving setbacks from the achievements it has made. Can India better that through far better application and a modicum of political consensus? A whole crop of ideas on changing the narrative exist and have only to be revisited. At the same time, wargaming of the response to different scenarios must be done in earnest and response vectors selected and rehearsed. We may need these earlier than what assessments can point to. Source: https://www.firstpost.com/india/jammu-and-kashmir-quiet-summer-may-be-precursor-to-stable-future-in-valley-as-india-upped-retaliatory-benchmark-with-balakot-strike-6594571.html

Previous LoC trade suspension: Move to curb Pakistani sponsorship of terrorists in J&K
Next JeM militant, hailing from Pulwama, returned to the mainstream