Did Zakir Moosa fight for ‘supremacy of Islam’ or for a new nation of Kashmir?

How the young boy whose passion was once Yamaha motorcycle was now a category A++ militant? Musa fell out with the separatist leadership after he recently threatened them and said that militancy should not aim to create a new nation of Kashmir but for the supremacy of Islam…..

One of the most wanted militants in the Kashmir Valley, the Islamic State Jammu and Kashmir (ISJK) chief, Zakir Musa, was killed by security forces in a brief encounter in Dadsara village of Tral in south Kashmir’s Pulwama district on Thursday. Following his death, the state government decided to shut school till Sunday in view of the volatile stuation. 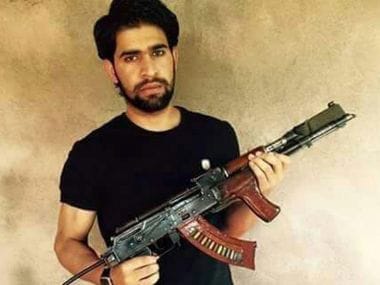 A joint team of army’s 42 Rashtriya Rifles and Jammu and Kashmir Police cordoned off the Dadsara village on Thursday evening as people were busy preparing to break the fast as the Muslim holy month of Ramzan is going on. The forces knew exactly which house the militants were hiding in.

A police team initially tried to contact the militants holed up inside the house and persuade them to surrender, however, police said the militants fired towards a team of security forces. Local media said two militants whose identities were not known immediately have been killed during the gunfight. But the rumours about Musa’s killing had started much before the actual encounter ended.

The name of Musa, who became a household name in Kashmir after parting ways from Hizbul Mujahideen and subsequently being nominated as the head of the Kashmir Islamic State Jammu and Kashmir, is often invoked in protests and slogans are raised in his favour on almost every other occasion.

Musa was named the head of Ansar Ghazwat-Ul-Hind, an offshoot of Al Qaeda, for the Valley in late July 2017, after he parted ways with the Hizbul Mujahideen, comprising mostly of local Kashmiris, and threatening to behead the Hurriyat leaders in the main city centre of Srinagar, Lal Chowk, who described the ongoing crisis in Kashmir as a political struggle.

Musa had once said in a video message that most of the people in Kashmir were involved in a fight for a secular state which was ‘haram’ in Islam and threatened to behead Hurriyat leaders at Lal Chowk in Srinagar.

A resident of the Noorpora area of Awantipora, Musa, was studying at the Ram Dev Jindal College in Chandigarh. During a vacation home, he was charged with stone-pelting by the Jammu and Kashmir Police. He was hiding in Jammu when, after persuasion by the police of going lenient against him, his father, Abdul Rashid Bhat, an assistant engineer, made him appear in a police station.

Musa was attending court cases when, in July 2013, he disappeared, leaving a note behind telling his parents not to look for him. The young boy whose passion was once Yamaha motorcycle is now a category A++ militant. Musa, however, has fallen out with the separatist leadership after he recently threatened them and said that militancy should not aim to create a new nation of Kashmir but for the supremacy of Islam.

As the news spread there were clashes across south Kashmir and in some parts of the Srinagar. Musa had come to his home, police sources said, but he fled before the forces cordoned off the area. “He was later killed in nearby woods,” a police officer said. Source: https://www.firstpost.com/india/isjk-chief-zakir-musa-shot-dead-but-no-official-confirmation-yet-reports-emerge-after-encounter-with-forces-in-tral-6692501.html

Previous Ghazwa-tul-Badr anniversary in J&K: A note of caution is seriously required in final days of the holy month
Next AIUMB welcomes PM Modi’s assurance to minorities as message of inclusion in India