“Painting to me is like poetry—timeless and universal” (Gulam Rasool Santosh, the Kashmiri Poet-painter) 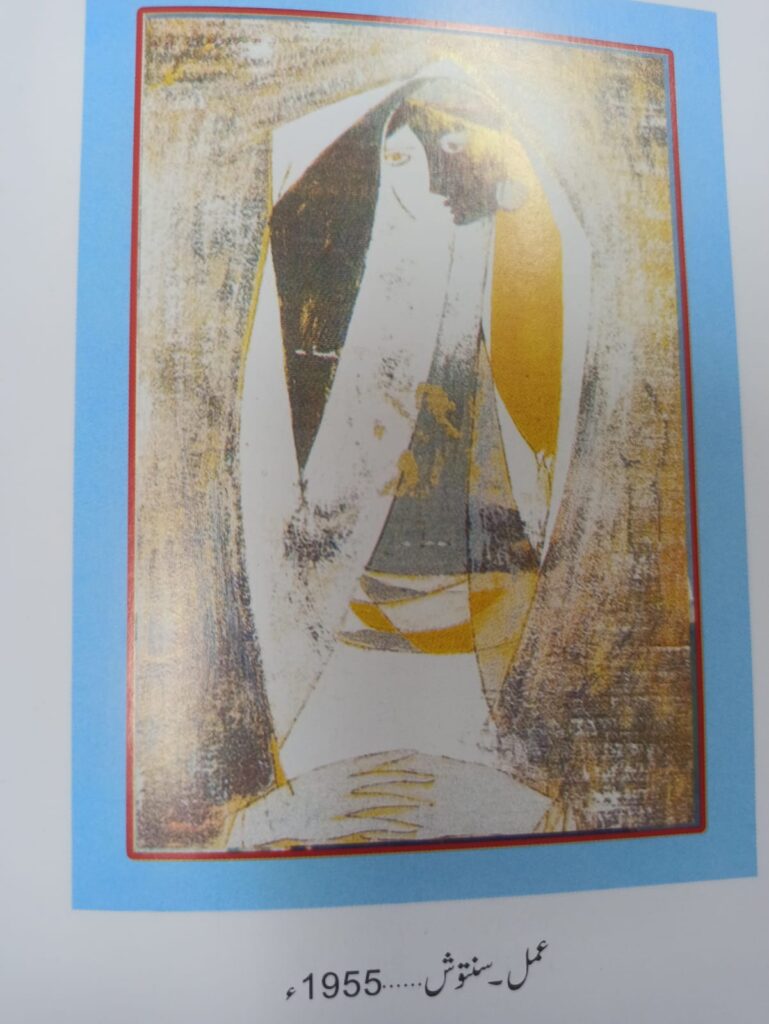 Gulam Rasool Santosh — also known as G. R. Santosh—a prominent Kashmiri artist, poet and a painter —was born in a modest Muslim family in Habba Kadal near old Srinagar. Inspired by the Kashmiri Shaivism, he was, in all probability, the most prominent Kashmiri Muslim artist from the neo-tantra movement in Indian art, which includes artists like Biren De and Sohan Qadri.

In the words of renowned Comparative Religion scholar, Prof. Madhu Khanna, former senior faculty at Jamia Millia Islamia’s Centre for the Study of Comparative Religions and Civilizations, and a distinguished historian of religion and world mysticism: “G. R Santosh belongs to the first wave of Tantrik artists in India….He was the first and foremost even among those who inspired the Tantra arts”. 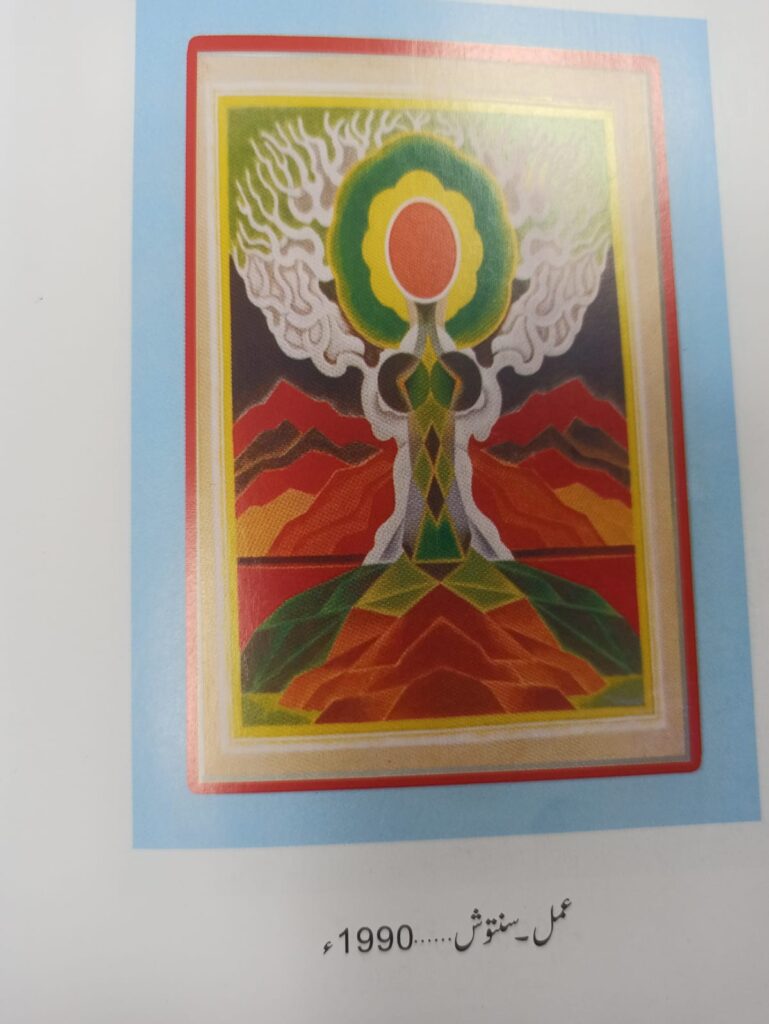 Interestingly, the reason why a practicing Muslim artist from the valley of Kashmir, Ghulam Rasool named himself as “G. R. Santosh” is that his wife, Santosh, who was his best childhood friend as well, belonged to a Kashmiri Pandit family, and hence Ghulam Rasool opted for a suffix of “Santosh” with his original name. G. R. Santosh began his career painting landscapes in his home Kashmir before being discovered by S. H. Raza, who gave him the opportunity to study under the famed artist N. S. Bendre at the Maharaja Sayajirao University in Baroda. After a few years of painting, he decided to try something radically new— neo-tantra art.
In 1964, he had a mystical experience in the cave of Amarnath and thus the painter-artist G. R. Santosh transformed into a mystic as well. Later, he dedicated his life to the study and practice of tantra from then until his death in 1997. 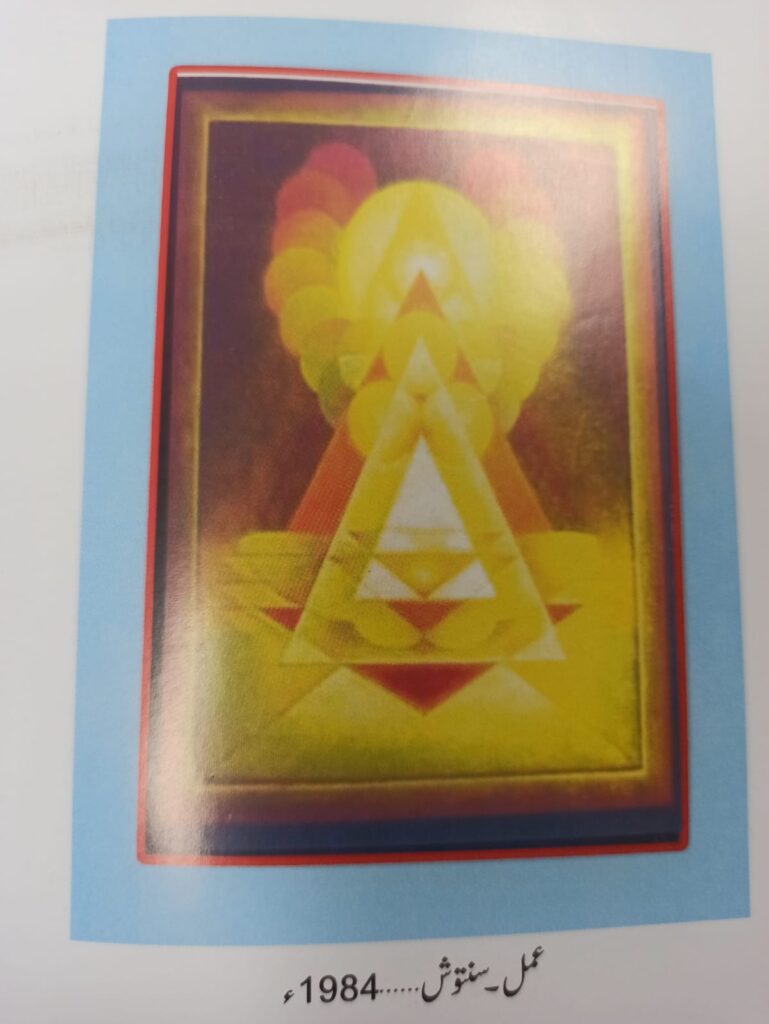 This is the first-ever retrospective of this important Indian artist, bringing together over 120 works from his early years through his final works. Starting with his early abstracts, figurative paintings, and landscapes from the 1950s and 1960s, the show follows the development and evolution of his art through the transitional era, known as the Early Tantric Period, through his sizable work.
As a noted contemporary art historian in India, curator and scholar on the Vedic literature, Dr Madhu Khanna reflects on Ghulam Rasool Santosh and his masterpieces:

“G. R Santosh belongs to the first wave of Tantrik artists in India. When we look at his work, we find cosmology is being reinterpreted and the notion of creation, mandalas and yantras being recreated in his art in a different way. But in all of those images, you can trace their vocabulary to ancient sources. What is so unique about his paintings is that he uses many archetypal symbols. So you have, for instance, a symbol of male and female principles. You have the inverted triangle which embodies the female principle and then you have the triangle which symbolizes the male principle, and both are super-imposed which you can see in the lower part of the painting. It emerges like a Cosmo-gram with many ideas of creation, time, spatial formations, and the colours are so well blended, and imageries so well framed that it is like a modem mandala of the cosmos.” 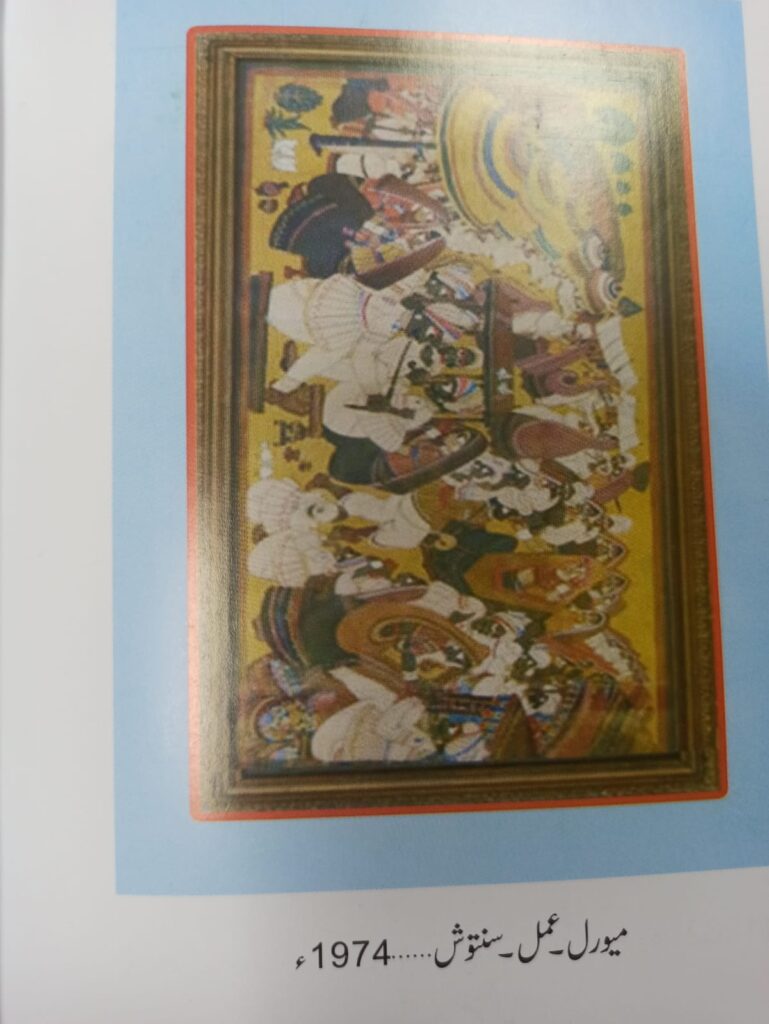 A devotional meditator and tantra practitioner, Santosh’s life and his paintings reflect the legacy of acquiring unusual knowledge and deep consciousness in the form of transcendency beyond religion, time and spatial formations. His neo-tantric consciousness greatly influenced his work in a unique way: he regarded colour as light, which he mirrored in his frequently bright paintings, where colour becomes a strong and influencing aspect.
Some of Santosh’s works as illustraed in an Urdu book “Shiraza” (Ghulam Rasool Santosh Special Number)

It would be appropriate to sum up this piece with a couplet of Ghulam Rasool Santosh, who was not just a painter and creator of remarkable paintings such as ‘Main Santosh Hun’ and ‘Rup Agni’ but also a well-versed Kashmiri poet. He says, and I quote:

Behold, and then you may well believe,
The only voice to trust is the one you hear.