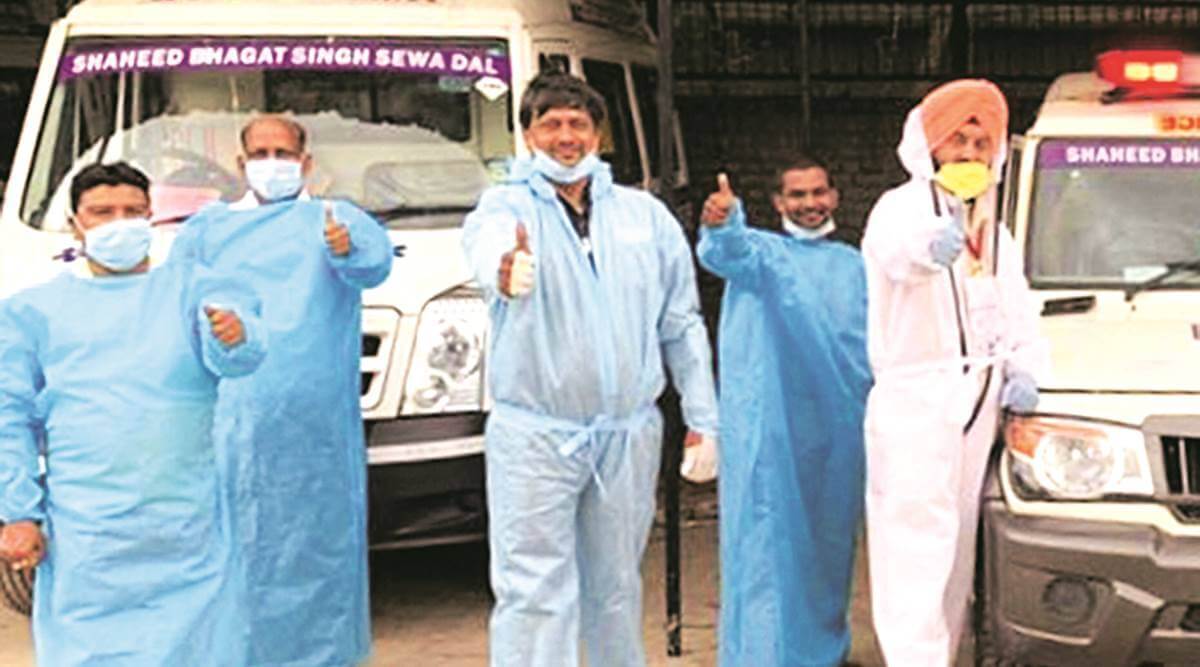 arif Khan had been sleeping in an ambulance parking lot for over six months, 28 km from his home in northeast Delhi’s Seelampur, keeping in touch with his wife and four children on the phone. Aarif Khan was on call 24X7, bringing Covid-19 patients as well as bringing his victims to their last rites. The 48-year-old ambulance driver succumbed to the disease at Hindu Rao Hospital on Saturday morning.

Employed with the Shaheed Bhagat Singh Sewa Dal, which offers free emergency services in NCR, if a family was in need, Aarif Khan would always pitch in with cash for the last rites, or help with the rituals if the close ones of a deceased were not around, his colleagues say.

He made sure that everyone had a farewell, but that could not be offered to him by his own kin. “For a few minutes, they saw his body from afar,” Jitender Kumar said, adding that since March, Aarif Khan had ferried nearly 200 bodies.

Aarif Khan became ill on October 3 and had a Covid-19 test carried out, which was positive. He died after being admitted to the hospital within a day.

Aarif Khan’s son, Aadil, 22, said that since March 21, they had only seen him during his brief home visits. We met when he came to pick up something, like clothes … sometimes I used to go and check on him. We’ve always been concerned about him. But he never bothered about Covid, he just wanted to do his job well,” said Aadil, the younger of Khan’s sons, adding that he was already sick the last time Khan came home.

“The other son of Khan, Asif, said, I haven’t even gotten to say goodbye to him… How can we live without him?”

Aarif Khan, who earned Rs 16,000 per month, was the family’s sole earning member. Their monthly house rent is Rs 9,000. Aadil told his brother and once in a while he did odd jobs, but lately, work had petered out.

“Kumar, who was present at Aarif Khan’s funeral, said,” Pariwaar ke liye dukh ka pahaad toot gaya hai (It is a massive blow for the family).

”These were exceptional times, and while he was a driver, Aarif Khan also frequently assisted with the last rites. He was very hard working,” said Jitender Singh Shunty, the founder of the Shaheed Bhagat Singh Sewa Dal, adding that Khan worked 12-14 hours a day, responding to calls even as late as 3 am. Woh Muslim tha par Hinduon ke bhi daah-sanskaar karaata tha (He was a Muslim but he helped out even with cremations of Hindus)…

When Shunty and his family tested positive for the virus, Aarif Khan was also around. So, when Aarif Khan got infected and took a turn for the worse, he tried to put the kindness back. The deterioration was, however, sudden. “Aarif has no other health problems, but for the last few days he has difficulty breathing,” he said.

Anand Kumar, 32, a fellow Sewa Dal driver who is also staying in the parking lot for fear of taking the virus around, said, “Aarif was very helpful when he joined a year ago.” He treated me and directed me like a brother. Conversations between them mostly revolved around how much they missed their families, Kumar said.

Established in 1995, the Sewa Dal provides the vulnerable in and around the capital with free and affordable emergency services, including ambulances and blood donations, and Aarif Khan has worked with them from almost the beginning.

Shunty said they are turning to not only hospitals, but also RWAs and police stations. One of their 12 employees was Khan. Last month, a letter of appreciation was written by Guru Teg Bahadur Hospital thanking the organisation for transporting more than 300 bodies from the Covid patients’ hospital and assisting in their last rites, including in cases where family members have not appeared. A letter noting their contribution during the pandemic was also written by East Delhi District Magistrate Arun Kumar Mishra.

Shunty said, providing an example of Arif Khan’s dedication, “On September 30, a hospital refused to release the body of an individual because his family was unable to foot the bill … Aarif Khan chipped in. He was a man who cared about others honestly.”