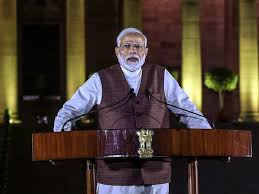 rime Minister Narendra Modi’s participation as chief guest at the centenary celebration of the Aligarh Muslim University (AMU) on 22 December may mark the beginning of a new chapter in the history of the university and in India’s inter-community relationships.

One hundred years is a long period in university life. By the 19th century Muslim modernist and reformer Sir Syed Ahmad Khan, AMU began as Muhammadan Anglo-Oriental College in 1875 to introduce modern, Western education among the Muslim community. Later, the institution graduated into AMU in 1920 through an Act of the Imperial Legislative Council.

Sir Syed was a pragmatist and a rationalist of the hardcore. His life-long mission was to persuade the world, when it was assumed that the Western way of life and people were absolute evil, and that any truck with them was a terrible sin, to go for and benefit from modern, scientific and English education. He offered a platform for the group to come out of despair and gain access to modern education. Since the British saw Muslims as an enemy of their empire, and had come down hard on them after the failed Revolt of 1857, his other goal was to get the Muslim community closer to the British.

The aim was not to bask in the glory of an institution for Sir Syed, who died in 1898 before his institution took the shape of a flowering university. He wanted nothing less than a full-throttle renaissance of Indian Muslims, liberating Muslims from bigotry and obcurantism. He sought to make the community a part of progress throughout Europe in science, literature and new thinking.

Yet the university ceased to be a full-scale modernising force and a centre of excellence for Muslims in India, despite its sterling reputation, and a formidable list of luminaries ranging from celebrated author Saadat Hasan Manto to national icon Major Dhyan Chand that it generated over the years. It lost its momentum somewhere, and what is more troubling, in recent times, it has developed a penchant for courting bad light for one cause or the other.

The participation of the Prime Minister in the centenary may provide an opportunity for a new beginning for the AMU community. Since Sir Syed’s tireless effort to modernise them, the Muslim community has moved forward, but the Muslim community remains highly reluctant to obtain modern education vis-a-vis other communities in India. Modernisation, a spirit of promoting new, progressive ideals, remains a project that is incomplete.

Much of the problems of the Muslim world today derive from the mistaken belief that Muslims can recover power, respect and relevance by using their old toolkit of culture, religion and pre-modern ways. But it is close to the situation of the bridge on the Choluteca river in Honduras, which lost its importance when the river under its pillars shifted far away and now the bridge stands in the wilderness, depending on old techniques. For crossing the river, the old bridge is of no use.

The prominence of the Prime Minister chairing this event also lies in the fact that it will not only be the AMU community in India and abroad who would listen to him when he addresses the AMU community on 22 December. All the Muslim intellectuals, and the culture, will be attuned to him. This opportunity will improve the country’s prospects for greater inter-community understanding and harmony.

The Prime Minister has tried time and again to reach out to the Muslim community. But some parts of Muslims have seen his frequent attempts to create an understanding with the group with suspicion. Perhaps this is another such effort to win the Muslim mind by the PM, and it should not be allowed to go to waste.

The PM has consistently encouraged that no youth from the community should move towards radicalization, but instead take the path of education and modernisation. He said the forces of darkness must be won at the World Sufi Forum in Delhi in 2016 by the power of our ideals and the real message of religions… it is through openness and inquiry, dedication and accommodation, and respect for diversity that humanity advances, nations advance and the world prospers.

Seventy-two years before PM Modi charmed the AMU community with his presence, at its annual meeting, Jawaharlal Nehru raised serious questions, and they are still important today. “I am proud of our heritage and of our ancestors who have given India an intellectual and cultural pre-eminence, he said.” How do you feel about the past here? Do you believe that you are sharers and inheritors of it as well and, thus, proud of something that belongs as much to you as to me? Or, without knowing it or experiencing the strange thrill, do you feel alien to it and move it on without realising that we are trustees and inheritors to this immense treasure. We may adhere to various religious beliefs or even to none; but that does not remove from us the cultural heritage that is both yours and mine. The past holds us together, why should the present or the future divide us in spirit?

AMU responded to these queries

By churning out distinguished alumni who straddle the high levels of politics, sports and academics in the country and work for the unity and eminence of India. PM Modi will also ask the AMU community certain questions and float bold ideas.

And if it emerges to be an outstanding institution, becomes a think leader for the Muslim community and the world, or falls into the rut of the ordinary, it will decide how the university tries those questions. In order to build an awakening among the Muslim youth in the world, it can shake off its sloth, giving direction to the community and country. If it fails to respond, its destiny can not be fulfilled.