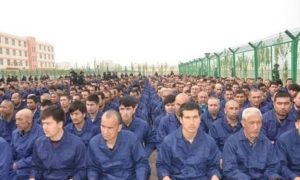 s Amnesty has said, mass re-education camps used to hold Uighur and other Muslim minorities in China are run like “wartime concentration camps.”

According to human rights organisations and a UN panel, up to one million Uighurs, Kazakhs and other minorities have been illegally imprisoned in internment camps in the far west Xinjiang region.

China insists that it is keeping people convicted of small offenses and sending them to “vocational centres” and that there are “grateful” inmates.

Yet Uighur activists have claimed that up to 3 million people have been held in the re-education camps, Patrick Poon, Amnesty International ‘s China researcher, told The Independent. “The size is terrifying. In recent Chinese history we have not seen that there will be such a scale of detaining people in re-education camps in such huge numbers,” he said.

“So I think it’s legitimate for people to raise their concerns about how the re-education camps are run like concentration camps in wartime. In terms of scale it is comparable.

He said Amnesty had reports from former detainees who said they had to attend lessons in re-education politics and sing political songs. Past sources also said that, in addition to being forced to eat pork and drink alcohol, Muslims were forced to denounce Islam and pledge allegiance to the Chinese Communist Party-actions forbidden by their faith. Yet new accounts of life in the camps or the broader area are scarce, mainly because former prisoners are too frightened to talk about their cases and because the Chinese state restricts what the region’s journalists can do, according to Sophie Richardson, Human Rights Watch’s China director.

It’s a area that journalists can get into at least in principle, but the regulations on what they can do while they’re there are extremely stringent, and those just got tighter, “she told The Independent. “That’s a big story people are aware of, but having fresh details is difficult.”

She added: “One of the big challenges is that surveillance is rightly very much a concern for the diaspora community. And while you’re seeing a few more people speaking out, there’s a lot of reasoning in people’s minds who are worried about speaking out because they’re worried about their family members in China.

She said there was also the possibility that it was more difficult for those detained to leave China, adding: “If you see a government refusing people the freedom to leave, it typically means they have something to hide.”

Another reason could be the unique status of Uighurs as an ethnic as well as religious minority, Ms Richardson said. “Uighurs aren’t as well recognized worldwide as an ethnic group as Tibetans are. Then there’s the Islamophobia problem that the Chinese government has stirred up at home. They say that Xinjiang is awash with terrorists, and that [China] only follows a counter-terrorism and counter-extremism policy as everyone else does.

Although Chinese officials initially issued unconditional denials that the country operated mass internment camps, they later justified them by claiming that they were used as work openings for civilians who were guilty of minor offenses. The international response was still somewhat muted, while criticism of Beijing’s treatment of its Muslim community is on the rise.

“If a million Muslims were locked up by every other government in the world, I think we would fairly presume to have had calls for a UN Security Council debate or an international investigation,” Ms Richardson said. “This is impossible to happen with China generally.”

The most senior human rights official of the United Nations last week recently demanded direct access to the Xinjiang region to check the “worrying accounts” of re-education camps.

“We were calling for direct access to the region in order to be able to test and verify the troubling reports we are getting,” Michelle Bachelet, the High Commissioner for Human Rights, told a Geneva news conference.

Her request came a day after Barbel Kofler, the commissioner for human rights in Germany, said that China had blocked her from traveling to the region.

“I am shocked by news of Turkish Uighur minority treatment,” Ms Kofler said last Tuesday in a statement. “I would have liked to get a first-hand understanding of the situation there and I will continue to push for permission to visit Xinjiang early.” But Ms Richardson said it was promising that the Organisation for Islamic Cooperation, which claims to be “the common voice of the Muslim world,” has released increasingly strong statements about China and the illegal detention of Uighurs and Muslims.

“One of the threads of those debates has been all along ‘why isn’t the world’s Muslim community in China speaking up for Muslims? ‘Oh, it looks like they do now,’ said Ms Richardson. It comes in the midst of news that more than one million Han Chinese citizens have travelled to Uighur Muslim families’ homes to reveal whether they display Islamic or non-patriotic beliefs.

American anthropologist Darren Byler said it would be “serious” to look for signs of the commitment of their hosts to Islam, such as seeing if they had a Quran in the house or fasted in Ramadan.