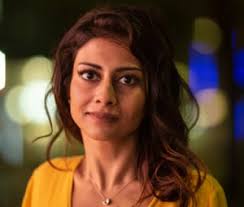 orn in north London in 1983, I grew up in a family of Bengali-Bangladeshi. I just wanted to be English, but I felt pressure from my family to be a “good Muslim girl” and not to be part of western culture. My family has become dysfunctional. When you don’t trust your parents, you tend to distrust authority.

We moved to East London when I was 17. I made new friends, but they were very traditional, religious people, and I was embarrassed that I was too western. I felt so lost that I was already trying to become a new person. My cousin, who had a great influence on me, had been radicalised at university. She was telling me about the caliphate. I’d read a lot of Saudi Islamic fatwas online. I figured I was looking for the truth.

In 2003, I was at the anti-Iraq war march in London, when some men gave me a piece of paper with the name of a Muslim dating website on it. That’s where I met John Georgelas, a US convert to Islam.  He had grown up in a middle-class family, he was multilingual and seemed so intelligent. I was looking up to him.

On his first visit to London I married John, believing that this was the only way I could leave home. We moved to the US shortly afterwards, and had a son. John became more radical just as I stopped wearing the niqab, and became independent. He was accused of hacking into a pro-Israeli lobbying group’s website in 2006, and went to prison for 3 years. I was still dependent on him financially and did not know that I was in an abusive marriage.

When John came off the probation, we moved with our three children to Egypt and then to Istanbul. He suggested going to Syria but I was insistent that I didn’t want to take my children to a war zone. However, we couldn’t afford to stay in Istanbul and John told me and his family back in the US that we were moving to Turkey’s Antakya. We went straight to the Syrian border, instead.

I didn’t know what was happening when we boarded a bus in the middle of the night. I was pregnant for five months, and just glad that children and I could sleep and sit down. We’d been at a Syrian checkpoint by the time the sun rose and John warned me not to make a scene.

I called his mother as soon as I could find a phone, and told her that John had lied to us. I screamed, and asked her to contact the agents of the FBI who had been tracking him for years. Later, the FBI informed me that if I returned to the US, I would not be charged with joining an extremist organisation.

We did not have drinking water in Syria, since the tank at the top of the house had been shot through. I was malnourished and so were the kids; I was afraid to lose them. John blamed me for misleading the agents and for tricking us I was so angry at him. As I refused to cover my face at this point, and he thought I was an embarrassment.  He felt under pressure from his friends to either leave or control me.

Ultimately John showed mercy and arranged for us to leave, but due to road blockades and infighting I had to wait three weeks to get out. He has paid for sending us to a human trafficker. Before hopping onto a truck under sniper fire, we were forced to run a few miles and crawl through a hole in barbed wire.

The trafficker should have driven us to the bus station, but he left us in the middle of nowhere. I was distracted, until we were helped by a kind Turkish man. I was so thankful to have been alive. I wanted my children to live a good life, to fulfil their lives and to give the world back.

John played an important role in the development of the caliphate and was a leading propagandist for the Islamic State, helping to groom other westerners. I never saw him again, and later heard he would have remarried in Syria.

Last year I learned he had died, most likely during the 2017 US bombing.

Now, I live in Texas, a couple of roads from his house. I know it is nice to be close to them and the children. My current husband is respectful and caring; I enjoy the freedom of being myself.

I worked in UK with the Faith Matters counter-extremism party. Education is important for de-radicalisation: the evidence, facts and science must be presented. That’s what changed me: I was reading widely and educating myself. In order to live in harmony we have to have common values.