Okeil: The Qatari authorities systematically practice enforced disappearance against anyone who exercises their right to express their opinion.

Mohmad Irzeik: My brother has been missing since May 2020. Neither the Qatari Human Rights Committee nor the Syrian embassy in Qatar could disclose his fate.

Mennatalla Abdelraouf: The working group shall files this complaint to the consideration of the Qatari and Syrian governments, demanding a speedy response from the two governments.

Maat for Peace, Development and Human Rights filed a complaint to the UN Working Group on Enforced Disappearances regarding the disappearance of the Syrian citizen “Abdul-Razzaq Ahmad Erzaik”, residing in Qatar. 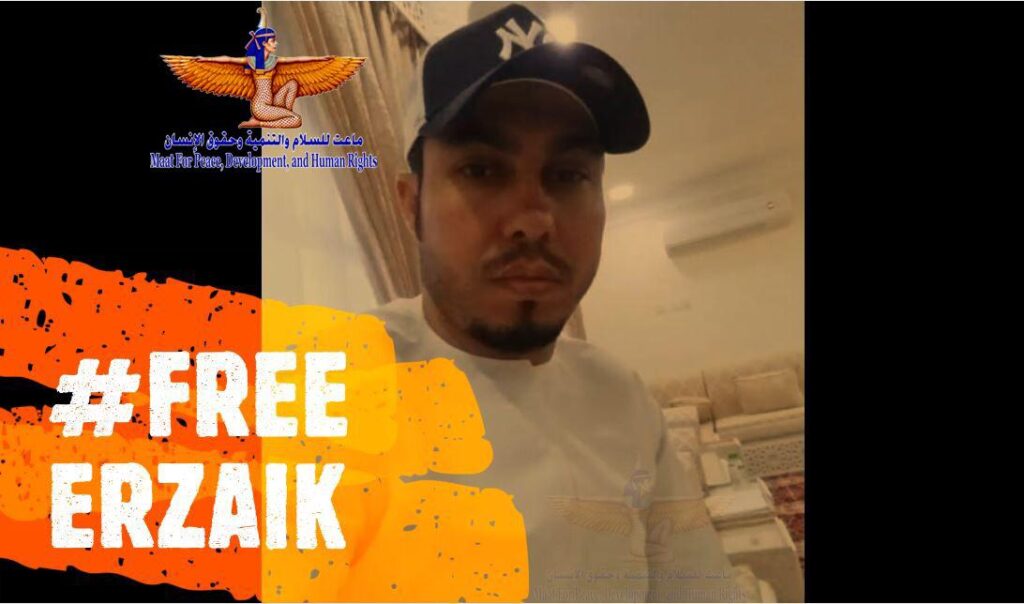 The complaint discussed the background of Erzaik’s disappearance, its adverse impact on his personal rights, and its contradiction to the international human rights conventions, to which Qatar is a party. The complaint also highlighted the heavy occurrences of such practices in Qatar during the recent period.

“Erzaik” has reportedly disappeared from his residence in Al-Luqta on May 28, 2020, when three people dressed in civilian clothes have abducted and took him to an unknown location.

His brother lost contact with him since that date, and after searching all the stations of the Ministry of Interior, Criminal Investigation and Preventive Security, Al-Rayyan Police Center reported that he is being held in Qatar state Security.

Enforced disappearance, which is systemically practiced by the Qatari authorities, is defined by the International Convention for the Protection of All Persons from Enforced Disappearance as “the arrest, detention, abduction or any other form of deprivation of liberty by agents of the State or by persons or groups of persons acting with the authorization, support or acquiescence of the State, followed by a refusal to acknowledge the deprivation of liberty or by concealment of the fate or whereabouts of the disappeared person, which place such a person outside the protection of the law.” Enforced disappearances are more than occasional in Qatar, and are practiced against anyone who violates or criticizes the state policies.

For his part, Ayman Okeil, President of Maat, said that Article 9 of the International Covenant on Civil and Political Rights, recently ratified by the State of Qatar under Decree No. 40 of 2018, states that “Everyone has the right to liberty and security of person. No one shall be subjected to arbitrary arrest or detention. No one shall be deprived of his liberty except on such grounds and in accordance with such procedure as are established by law.”

It is also must be noted that anyone who is arrested shall be informed, at the time of arrest, of the reasons for his arrest and shall be promptly informed of any charges against him.

Muhammad Erzaik, the brother of the forcibly disappeared, stated that after his brother’s disappearance, he had communicated with the National Committee for Human Rights in Qatar and the Syrian Embassy in Qatar, but his demands for disclosing the fate and whereabouts of his brother were never met.

Okeil explained that the complaint filed by Maat for Peace called on the Working Group on Enforced Disappearances to immediately intervene in this issue to remind the Qatari authorities of their obligation to respect and guarantee the basic human rights of Qatari citizens and residents under all circumstances, and to put an end to the current ongoing repression practiced by the Qatari authorities against everyone who exercises their right to express his opinion. Okeil, also, called on the working group to pressure the Qatari authorities to disclose the fate of the Syrian citizen, and to carry out an independent investigation into the incident.

For her part, Mennatalla Abdelraouf, Director of the International Mechanisms Unit, stated that the complaint was received by the Qatari and Syrian governments, and we wish them to respond quickly and take all measures to release Erzaik, due to the expiration of the prescribed period of detention or his presentation to the prosecution and to disclose and investigate the reason for his arrest in the presence of his lawyer. The text of the complaint will be published upon the expiration of the prescribed period for receiving a response.