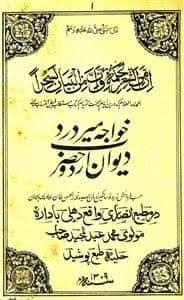 hwaja Mir Dard was among Delhi’s most prominent Sufi mystics and Urdu poets. Born in 1721, he was spiritually inclined since his childhood and was trained by his father Khwaja Nasir Andaleeb, himself a mystic of the Naqshbandi Sufi order and a noted poet.

Having completed an informal elementary education at home, Mir Dard attained the spiritual companionship of the Sufi luminaries well-versed in Arabic and Persian studies. But he did not get content with his existing knowledge of theology, philosophy and languages. He rather developed a very good flair for Sufi music with the renowned Sufi singers (Qawaals) who frequented his father’s house.

Mir Dard believed that mastering the art of expression is a God-gifted skill and a mark of “manhood” (adamiyat). Thus, he draws a close resemblance between learning the art of speech and possessing humanity. Mir Dard strongly believed that his own poetry was divinely inspired through kashf (unveiling) — a Gnostic Sufi doctrine dealing with knowledge of the heart rather than of the intellect. 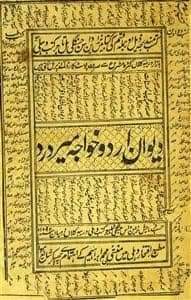 It is held in Sufism that kashf and ilham (divine unveiling or inspiration) are bestowed on the saints as an immense spiritual force through which they express their divine love, wisdom or knowledge in prose or poetry. But they are attainable only through the purification of the heart by constant remembrance (zikr) of the divine. However, ilham is completely distinct from wah’y (divine revelation), which is exclusive to the prophets.

Notably, Mir Dard’s claim of the divine origin for his poetry did not go down well with many of the contemporary clerics who rejected it outright as a poetic illusion. However, Mir Dard did not proclaim it without walking in the Sufi path of the four stages: (1) Shariat (revealed law), (2) Tariqat (spiritual path), (3) Marifat (gnosis) and (4) Haqiqat (reality). He encapsulates this spiritual process: “Shariat is the form of Haqiqat and the latter is the inner meaning of the former. While Tariqat implies being characterised by the Shariat, Marifat is the unveiling of the Haqiqat. Thus, Shariat is the external from of Sufism and Tariqat is the inner level. However, Marifat is the secret (sirr) connected to the essence (kunh) of each reality, and Haqiqat is the secret of the secrets (sirr-e-sirr).

At the young age of 28, Mir Dard literally renounced the worldly pleasures and became one of the major mystic poets of Delhi, including Mir Taqi Mir and Mirza Sauda. Thus, he is recalled today as one of the three pillars of the classical Urdu ghazal (a type of amatory Urdu poems originating in Arabic and Persian).

Mir Dard wrote many ghazals with deeply mystical meanings. These couplets largely convey the message that the world is a phenomenal veil of the eternal reality. One of his best couplets that can be read at both secular and spiritual levels, are:

Dosto dekha tamasha yahan ka bus
Tum raho khush hum to apne ghar chale
(My friend, we have seen enough of this play.
We are going home, you can stay)

The writer is classical Islamic scholar and doctoral scholar with Centre for Media, Culture & Governance, Jamia Millia Islamia. Contact him at grdehlavi@gmail.com