ndian Muslims are in a state of despair after the Ram Mandir Bhoomi Pujan by Prime Minister Narendra Modi in Ayodhya on 5 August 2020. But this despondency is nothing new — they have been haunted by such depressive anxiety for a long time; now they are just trying to come to terms with what many in the community perceive to be their altered standing in India. 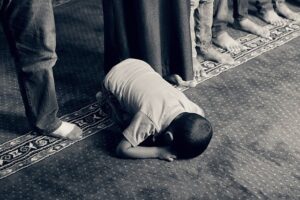 For the last three hundred years, ordinary Muslims in the sub-continent have hurtled from one disaster to another. So much so that a morbid melancholia was stylised as a cultural trope, and victimhood became their favourite dope. Ideally, the Independence of India should have enthused them with a new vigour like it did to every other Indian. But the self-inflicted injury of Partition kept them in a daze for many years. A secular and democratic polity did handhold them as they limped back to normality. But soon they relapsed into the same narrative that had earlier also brought them grief. Identity was the new shibboleth.

Identitarianism, insofar as it privileges community over individual, conflicts with democracy and eventually, harms the minority.

There was some inevitability about this recidivism. Superficially, separatism was a political ideology. Deep down it emerged from a particular interpretation of Islam — the power theology. Religious politics, being embedded into the mainstream religious discourse, spread wide as modern politics brought more and more people in its ambit. But, are Muslims a monolith that this narrative had to inevitably seep into their common consciousness?

Although the colonial construct of India might not be totally unfounded, Scottish historian James Mill’s religious periodisation of the ancient and medieval India as Hindu and Muslim, but the subsequent period not Christian but British, is problematic since not all Hindus and all Muslims belonged to the ruling class during the eponymously named periods.

According to Ziauddin Barni, a prominent medieval historian, the new rulers’ contempt for everything Indian was so deep-seated that the Indian converts to Islam were loathed as low-born and were kept outside the sphere of power.

Many centuries later, this attitude is still visible in how Muslims who take pride in their foreign lineage remain disdainful of their indigenous co-religionists. Not surprisingly, most of the Muslim upper castes are of foreign origin, and nearly all the Muslim lower castes are of Indian origin. The Ashraf-Ajlaf dichotomy, beset as it is with many methodological and analytical problems, is mainly indicative of exogenous-indigenous binary among Indian Muslims.

Since Indian Muslims, as Muslims, never had much power, it would be wrong to say that they lost any. The ruling class had a preponderance of foreigners. They were Turks, Persians, Afghans and Arabs whose religion was Islam. In the transition from medieval to modern, and from feudalism to capitalism, most of them fell by the wayside. Still, in the new order, they could have had a proportionate share. But they went for the easier option of dividing the country. The remaining Muslims, in the remaining part of India, sheltered by a democratic and secular Constitution, did have an opportunity to make their own mark. If they haven’t, some introspection is in order. They should ask themselves whether they, like their compatriots, undertook socio-religious reforms, and dotted the country with institutions of modern learning instead of religious seminaries. If the answer is in the negative, they have a lot of catching up to do.

Indian Muslims are fare better than in the past. Today, they have far more numbers than ever. There are a much higher number of mosques, madrasas, maulvis, and a much greater display of religious symbolism in dress and appearance than ever. There has actually been an intensification of Islamic religiosity in the public sphere.

As for the worldly matters, today’s Muslim is better fed, better clothed, better educated, and most well-off in history. What an ordinary Muslim has to eat and wear today was unimaginable for her ancestors at any time in the past. At the same time, a stable secular and democratic polity, free from turbulence and internecine conflicts of the past, has made life more secure for everyone, including Muslims.

Coming to politics, since much has happened in the interface between religion and politics, today’s ordinary Muslim is the most empowered Muslim ever. He/She is an equal citizen, fully enfranchised, who votes, and gets voted to from Panchayat to Parliament. Never in history, and rarely in a Muslim country, have these taken-for-granted entitlements been hers.

The improvements in life and dignity of Muslims is a blessing of modernity. Everyone, irrespective of religion, partakes of it. However, this wouldn’t be possible if Muslims were not extended systemic equality by the Constitution. And, how the Constitution works is largely determined by the cultural ethos of India, which does not allow ill-will towards a people because of their faith.

So, even though Muslims are better off than earlier, what’s the reason for their frustration about not remaining so powerful as they were in the mythical past? They haven’t lost anything, neither has Islam. However, the theology of supremacism has been neutralised. Other people became equal to them, which theologians, steeped in the idea of supremacism, could not tolerate.

The narrative of loss emanates from an outdated theology, which lacks the conceptual tools to make sense of a world beyond the binary of Darul Islam and Darul Harb — that is, the lands already conquered and the ones yet to be conquered. In this narrative, the profession of faith and observance of rituals do not suffice unless the believer has a monopoly over political power. Poet Allama Iqbal said, “Mullah Ko Jo Hai Hind Mein Sajde Ki Ijazat; Nadan Ye Samajhta Hai Ke Islam Hai Azad” (a Muslim free to observe rituals wrongly thinks that Islam is free. One wonders what Iqbal actually wanted).

It’s true that Islam is no longer the politically dominant religion. But neither is any other religion, including Hinduism, which, in theological terms, does not present itself as the maker and arbiter of India’s politics. Hindutva is an ethno-nationalist movement, which very avowedly anchors itself in nationalism, not in religion. Muslims, on the other hand, continue to think of politics in terms of religion because of the lack of reform.

And so, much like it doesn’t mean a loss of power for the followers of Hinduism and Christianity or any other religion, it doesn’t mean one for Muslims either. Most of the major religions have been secularised. For the ordinary people, transition from religion to secularism is a progress, not a loss.

A narrative is a story one weaves to inhabit as a character. Indian Muslims wove a false narrative, and immured themselves into it. There could be another. The one of India’s rise. They would be indispensable to the plot if they could rewrite their story.