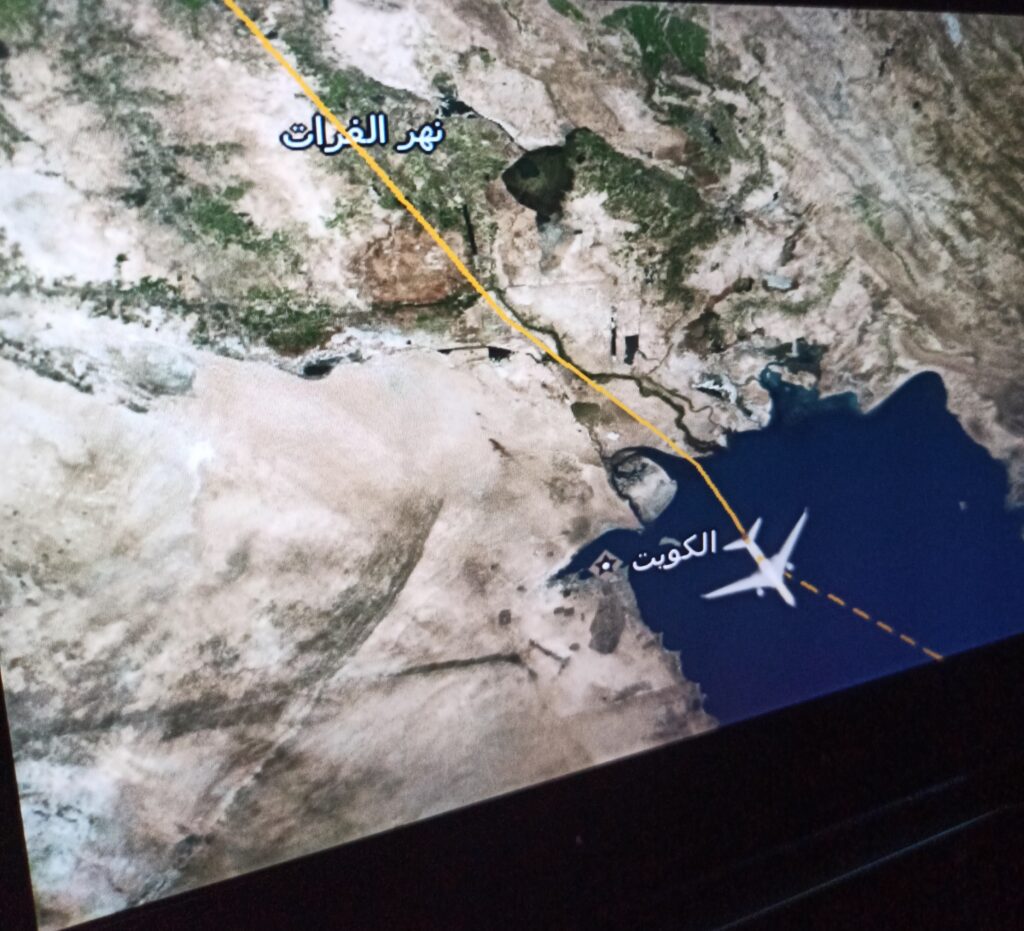 Photo Caption:  Last night on ‘Shab-e-Ashura’, the writer’s flight crossed Nahr-e-Furaat (The River of Euphrates) which is deeply connected to Imam Hussain A.S. The battle of Karbala took place on the banks of the River Euphrates in Karbala in present-day Iraq. It was truly touching and heart-wrenching moment on the 10th of Muharram–popularly known in India as Yaum-e-Ashura!

Edward G. Brown, Professor of Arabic and Oriental Studies at the University of Cambridge, writes in his tribute to the grandson of the Holy Prophet (PBUH) Imam Husain (A.S):
“A reminder of the blood-stained field of Karbala, where the grandson of the Apostle of God fell at length, tortured by thirst and surrounded by the bodies of his murdered kinsmen, has been at anytime since then sufficient to evoke, even in the most lukewarm and heedless, the deepest emotions, the most frantic grief, and an exaltation of spirit before which pain, danger and death shrink to unconsidered trifles.”
[A Literary History of Persia, London, 1919, p. 227]
Today, Imam Husain’s spiritual revolution provides a stimulant to enliven our spirit and create an inner spark to attain the real freedom; the freedom of spirit and conscience, inner peace and passion for justice and equality.
Therefore, each and every remarkable revolution of the world got inspiration from the martyrdom of Imam Hussain (A.S). Although his sacrifice occurred on Karbala some 1400 years ago, it still remains universal symbol of struggle for peace and justice and elimination of violence and terrorism. It also tells us those Muslim terrorists who make false claims of being Mujahidin (fighters in the path of Allah) and commit the barbaric acts of violence calling themselves Muslims, are just terrorists as these acts go completely against the true essence of Imam Hussain’s Jihad.
One of the most inspiring words ever said is that of Imam Husain which he spoke while addressing the enemies in Karbala: “If you do not have religion, at least be a free man in your life of this world,” because a free man can differentiate between the good and evil more easily than a biased one.
India’s Father of Nation, Mahatma Gandhi was highly inspired by Imam Hussain (A.S.). He strongly believed Hussain was and continues to be an epitome of non-violence and tolerance not only for the Muslims but also for all human beings with whom injustice is being perpetrated, no matter to which religion he belongs and in which form is the injustice. Mahatma Gandhi would famously say:
“I learned from Hussain how to achieve victory while being oppressed.”
According to India’s versetile poet-philosopher Rabindranath Tagore, Imam Husain’s sacrifice indicates spiritual liberation. He writes: “In order to keep alive justice and truth, instead of an army or weapons, success can be achieved by sacrificing lives, exactly what Imam Hussain did. Such an everlasting victory can only be achieved by the one who totally believes and trust in the Almighty God.”
The spirit and revolution of Karbala require from us a pure heart, sincere soul and truth-seeking mind to understand its universal message and global impact. If we take a deep insight into this great revolution, we will see it unique and distinct from all historical revolts of the world. Throughout the history, there has never been a leader who predicted about his own death before even setting a foot in the march. But Imam Husain, quite willingly, goes on treading the path to his sacrifice and takes every necessary step towards achieving it. He says addressing to the people at Mecca:
“O people, even if my body be cut into pieces by spears and wolves between Al-Nawawees and Karbala, there is no question of the day, which was already written. Pleasing God is our aim, we the family of the Prophet (pbuh)”.
In a sermon while proceeding towards Karbala, Husain says to his followers:
“O’ people, The Prophet of Islam has said that if a person sees a tyrannical ruler transgressing against Allah and oppressing people, but does nothing by word or action to change the situation, then it will be just for God to place him where he belongs. Do you not see what low level the affairs have come to? Do you not observe that the truth has not been adhered to and falsehood has no limits? And, as for me, I look upon death but as a means of attaining martyrdom. I consider life among transgressors an agony and affliction.”
The assassination of Imam Hussain (A.S.) came as a shock and serious setback to the whole world, not just to the Muslims. The way he was assassinated and the harsh treatment meted out to the Prophet’s noble family evoked rage and disorder among all Muslims who held the Prophet’s family in the highest esteem. As a result, Muslims the world over strongly disassociate themselves with the tyrannical ruler Yzeed and his Un-Islamic precepts, practices and political policies. Everyone who loved the Prophet (PBUH) came out to curse upon the murderers of his family. Hence, the revolution of Imam had fulfilled the most urgent and pressing need of the time by unveiling Yazeed’s un-Islamic character to the general public and left no doubt in any Muslim’s heart about the Umayyad’s autocracy and atrocity. Thus, the revolution of Imam Hussain challenged the Un-Islamic political concepts that Ummayyad regime in the hands of Yazid was trying to breed into Muslim minds.
Tags
#ImamHussainsacrifice By Ghulam Rasool Dehlvi Founding Editor Word For Peace Ghulam Rasool Dehlvi Founding-Editor Imam Husain (as) Islamic Spirituality Revolution of Karbala Word For Peace Word For Peace Edit Desk