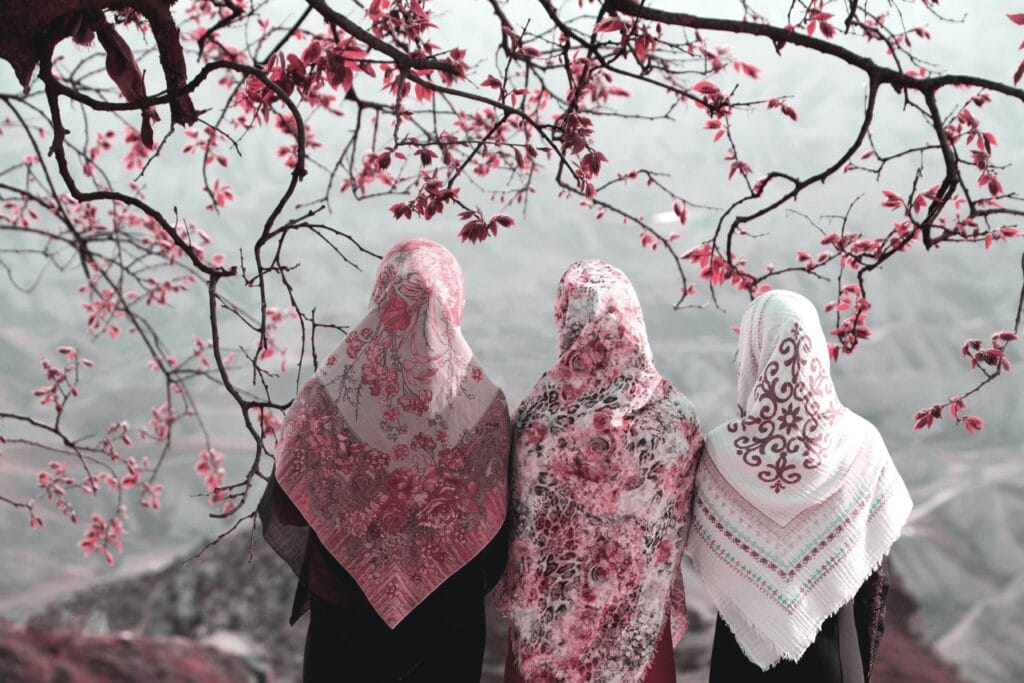 In our indian Muslim society, many people are largely ignorant about women’s rights enshrined in Islam. The major cause is the self-styled puritanical version of Islam which was actually not there in the authentic prophetic age.

For instance, the full veil was never imposed on women in the earliest period of Islam, that’s the Prophetic age or Daur e Risalat.

ʻAbd al-Ḥalīm Abū Shuqqah has elucidated in his well-researched Arabic book titled as, “Ensuring the Freedom of Women in the Prophetic Age” (تحرير المرأة في عصر الرسالة) that there was actually no imposition of the full-face veil, call it Burqa in the Indian context or Abaya in the Middle Eastern society, or the Iranian-style Hijab. He has ample proof from the Qur’an and authentic Prophetic Traditions (Sahih Ahadith) to substantiate and make this point patently clear.

But, have we ever stopped to really think what makes a common man in India think and say that women are degraded in Islam? It doesn’t seem to matter to him or her that Islam has elevated and freed women from the enslavement of the brutalising misogynist, patriarchal and male-chaunistic practices of what is called the pre-Islamic Arab of ignorance or Jahiliyyah.

Why this discrepancy in the authentic reality and the common perception? Apparently we Muslims need to give up blaming others and start introspecting ourselves, taking into account the majority Muslims’ practices witnessed by the world that determine their perception.

Being the birthplace of Islamic Shariah, Saudi Arabia is viewed as the epitome of Islamic practices. Indeed, it advertises itself as the last refuge of puritan Islam, whatever that may mean. Talking about women in Islam, people naturally fix their eyes on what is going on in the Islamic countries like Saudi Arabia with regard to the women living there. To their horror, they find women in Saudi Arabia largely deprived of their dignity and honour ensured by the Prophet of Islam.

In India too, whenever you see an oppressed woman in the name of Islam, or sabjugation of the women’s role in the lawful pursuits, it is actually an influence of the Salafism/Non-Madhabi theological schools which openly allow indiscriminate physical, spiritual, mental, emotional and financial exploitation of women by so many deceptive ways disguised as the various forms of Islamic Shari’ah which were designed in order to exploit poor and underprivileged women all over the Muslim world. It has nothing to do with the essential message Islam. And yet the Western media insists on calling it the ‘puritan Islam’.

In Saudi/Salafi society, women have been treated like commodities and disposable containers. Different kinds of legal opportunities have been provided for Salafi men to exploit women in the name of Islam throughout the world. Wahhabi /Salafi scholars have issued many fatwas to allow several kinds of deceptive and fake marriages to use women as sex slaves for as long as they wish. Here are a few types of fake marriages practiced and favoured by Saudi Salafis:

The terms and conditions of Misyar and Shia practice of Mutah (sexual pleasure) are same except that in Misyar, it is claimed that the partners do not fix a time to end their sexual relationship and are free to leave each other anytime they wish. In Mutah, they fix a specific time, like one week, one month etc., and at the end of that period both man and woman are considered as legally separated. In Mutah and Misyaar, man and woman need not live together under the same roof. They can meet whenever the man demands and spend a few hours together in privacy for sex and go to their homes quietly.

Misyar is a ” Koensdeler relationship “. Koensdeler is a Danish name given to a girl/woman who is neither your wife, nor girl friend. There is no social binding or loyalty in the relationship. She is just a sexual mate and not a prostitute who entertains with sex with anybody for money. Whenever you want, call each other, meet, have sex, and both of you are on your way. If you are fed up with the lady (Koensdeler), just call her and tell her that you don’t want to continue having sex with her. That is the end of your relationship.

(b) Urfa – In this relationship, arrangements are made as a customary marriage but there are no official contracts signed and this relationship also does not give women any rights whatsoever. She is kept as alone as the man wishes to use her for sex.

(c) Misyaf ( Summer holiday marriage) – It is a tourism marriage practiced by Saudis and other Salafis in the world who go on summer vacation to countries like Yemen, India, Pakistan, Bangladesh and other countries. In these countries they take advantage of poor Muslim families by fake marriages with young, rather very young girls between the ages of 9 to 16 years in collusion with local middlemen and agents who are paid for these notorious services.

(d) Friend Marriage – This is a special marriage where the bride does not go out of her house. The male goes to her house in the night or meets with her in a hotel and has sex with her, after which she goes back to her home. In this relationship the woman does not have any legal maintenance from the man. In most of the cases the woman demands a certain amount and gets it in advance.

(e) Misfar – (Foreign study and Business Trip marriage) Misfar refers to a deceptive marriage contracted by a Salafi for sexual gratification so that a woman may cohabitate with him for the period of time he is visiting a foreign country. These women are formally divorced after a short period that ranges from a week to a month. It is natural that most of these women who fall victim to this kind of fake marriage come from deprived backgrounds, and for most of them, they have very little say in the matter.Misfar is a deceptive marriage undertaken by Saudis/Salafis who go to study in foreign countries.

In Misfar, Salafis marry local women but never disclose their true intentions. Once their studies are over or their businesses are accomplished, they dump their wives and children born out of these fake marriages and go back to their countries without a trace. They use these women physically, emotionally and many a time financially since they save them from the trouble of finding accommodation or facing the financial burdens on their own.

Many fatwas by Saudi Scholars in this context are available on their official websites like that of the former Grand Mufti of Saudi Arabia Abdul Aziz bin Abdullah Bin Baaz.

In all the above deceptive marriages, the arrangements are made discreetly where women will have no evidence to pursue the fraudulent Saudi men legally. There is a massive network of Arabic dating websites that use revolutionary ways of interaction between total strangers where unsuspecting women are easily tricked into Saudi prostitution net in the guise of fake marriages approved by Saudi “scholars of puritan Islam.”

Most alarming in this context is the latest Fatwa by Shaikh Adil Al-Kalbani, the Imam of the Grand Mosque of Makka issued on July 16, 2010 (as reported on al-arabiya.net). Shaikh Kalbani, proclaimed this fatwa after receiving an email from an overseas Saudi male student studying in the ‘West’. The Saudi student, who is married and living with his wife, claims that he is worried about controlling his desires when he sees ‘Western’ females wearing seductive semi-naked clothes that arouse him,.
He goes on to ask the Shaikh if it is permissible to marry one of those women in a ‘Misfar’ marriage, which means marriage based on travel, because he claims that he can’t fight temptations and also accuses his wife of being frigid.

The old Shaikh Kalbani posted on his own website his fatwa that permits Saudis marrying Western women with the intention of divorcing them when they are finished with them without the pre-knowledge of the women of their deceitful plan.

Meaning, the Imam has given green light to Saudi overseas students and travelling businessmen to use women as disposable containers to relieve themselves sexually.
One of the most prominent Salafi scholars of recent times, Shaikh Abdulaziz Ibn Baaz (1910-1999) who was Grand Mufti of Saudi Arabia, also gave a similar Fatwa (Majmua Fatawa wa Maqalat Mutanawwi’ah – 16 Volumes).

In 1990 someone asked Shaikh Ibn Baaz the following question.

Question: “I heard one of your fatawas on audio-cassette in which you permitted marriages in foreign countries where the man marries with the intent of divorcing his wife after the termination of his employment or student visa. What, then, is the difference between this type of marriage and an invalid temporary marriage? What should he do if his wife bears him a daughter? Should he abandon her in a foreign country with her divorced mother? I am in need of clarification”.

Fatwa: The Shaikh replied : “Yes, the Permanent Committee for Scholarly Research and the Issuing of Fatawa (in Saudi Arabia) over which I preside, has issued a fatwa permitting a marriage with the intent of divorce as long as this intention remains concealed between the groom and his Lord. If he married in a foreign country with the undisclosed intent of divorcing his wife upon the completion of his studies or employment, he is not liable according to the majority of scholars.

This is the real face of Salfism which openly allows indiscriminate physical, spiritual, mental, emotional and financial rape of women by so many deceptive marriages devised by them to exploit poor needy women all over the world. It has nothing to do with true Islam, which places the status of women and girls especially on a higher pedestal than what we are schoked to see in the so-called self-styled Islamist societies of today.