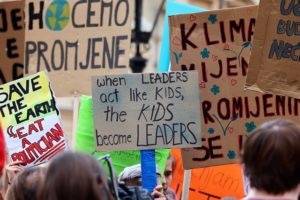 he 8-year-old Indian climate activist Licypriya Kangujam is taking the world by storm.

Kangujam is known as the founder of the Child Movement and one of the youngest climate activist to date for calling on world leaders and global organizations to take immediate action to fight climate change.

At age 6, she started her activism for the first time two years ago. She started by encouraging the Indian Government to change its climate policies to help curb the country’s amount of air pollution.

Upon attending the Asian Ministerial Conference on Disaster Risk Reduction in July 2018, Kangujam decided she would become a climate activist with a greater interest in climate change activism.

Since then, at the 2019 United Nations Climate Conference (COP25) in Madrid, she has founded an organization, travelled to 32 countries, attended her first parliament strike and called on world leaders to take direct action on climate change.

She has also promoted the incorporation of environment lessons in school curriculums, to be introduced at schools in Rajasthan and Gujarat at the beginning of the next academic year.

Kangujam’s key areas of focus are climate justice and climate education, and she has a list of demands she wants to meet for her government to achieve those goals. She also wants to regulate the fossil fuel and carbon emissions.

“This will bring our leaders transparency and accountability, which will benefit people, particularly millions of the country’s poor,” Kangujam told Global Citizen.

She wants every student in India to plant a total of 10 trees each upon passing their final exams. With about 350 million students in the country, that would result in 3.5 billion new trees being planted each year.

“We should do all of the above … strategies,” she said. “This can help combat climate change, and also improve the world’s environment. It can go a long way.”

As a youth climate activist, Kangujam has had to take some special steps to ensure her voice is heard.

Social media, particularly Twitter, has played an important role in amplifying her voice and making sure her message is distributed around the globe to world leaders and other climate activists. The UN also offered her a voice to express her fears about the planet’s future.

By doing so, she was able to consult with political leaders to discuss various climate problems plaguing India, such as air pollution and its connections with poor health and disease.

“I’m pressing government to ensure every child’s safety in India. I’ll keep placing more pressure on our world leaders,” Kangujam said. “The children are the future. The world needs us to create a better place. Our leaders need to move now before it’s too late.”