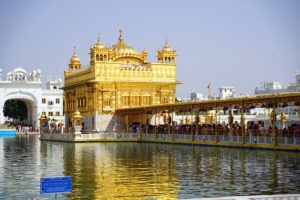 n what can be seen as a gesture to maintain communal harmony, Malerkotla’s Muslim families have begun to send tons of wheat to Amritsar’s Golden Temple to support the authorities who are struggling to run the community kitchen with the issue of ration.

The families sent two trucks to the Harmandir Sahib on Thursday evening carrying 330 quintals of wheat. More of these consignments are scheduled to be shipped in the coming days.

“Given that lakhs of devotees come go the gurdwara every day, our contribution is very limited. We want to contribute to helping the authorities run community kitchen as best as we can. When we heard that the authorities are in trouble due to lack of supply of ration, we agreed to help, “said Dr. Naseer Akhtar, president of the Sikh Muslim Sanjha Foundation, to The Tribune.

Foundation leaders had started harvesting wheat about 22 days earlier, and received an overwhelming response. Donated wheat on every house they visited.

“We bought wheat from the money that had been donated by some families which amounted to Rs 1.50 lakh. Dubai-based businessman and philanthropist Surinder Pal Singh Oberoi flagged off the trucks carrying wheat along with Takht Patna Sahib Jathedar Ranjit Singh. With the support of area residents we expect to send more wheat in the coming days, “said Mohd Parvez, another foundation member.

SP Manjit Singh Brar, who was also present, said that Malerkotla had always set the country an example of communal harmony. “Muslim families have done a great work. We all should help one another to defeat the virus,” said the SP.