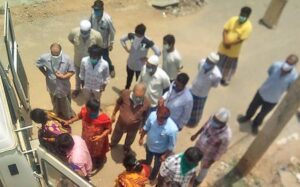 n a display of communal harmony, six Muslim volunteers from an outfit helped a Hindu family perform the last rites of an 80-year-old Hindu man in a containment zone in Perambai, near Puducherry.

According to A. Ahmad Ali, chairman of Popular Front of India’s (PFI) chapter in Puducherry, the Hindu man breathed his last on Tuesday.

The family resided in a containment zone after being admitted to the Villupuram Government Medical College and Hospital at Mundiyambakkam by one of their relatives, who had come to their home from Chennai, tested positive for COVID-19.

Neither neighbours or relatives have come forward to arrange the last rites, Mr. Ali said.

The family members have contacted Kottakuppam Health Inspector under whose jurisdiction the containment zone falls and have sought his help. He, in effect, pursued the PFI services to perform the last rites.

Mr. Ali said that after receiving the requisite permission from the authorities, volunteers arranged for the man’s cremation without charging the family with anything.