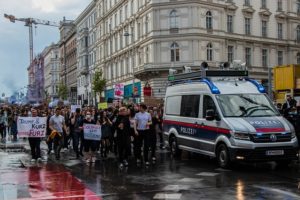 ore than 30 religious leaders were arrested after a pro-migrants demonstration at the U.S. border to show support for the Central American caravan.

Hundreds of people took part in the protest at Border Field State Park in San Diego, which borders Tijuana, Mexico, calling for an end to the practice of placing migrants in detention and welcoming those seeking refuge in the United States after traveling through Central America.

Leaders of migrant caravans have broken U.S. border barriers in a desperate attempt to demand asylum

Leaders from various Protestant, Islamic, Jewish and indigenous groups were among those taking part in the protest, sponsored by the American Friends Service Committee.

The arrests were made after the protesters entered a restricted area opposite the border fence, reported The Guardian.

Theron Francisco, spokesman for Border Patrol, told The Associated Press that 31 people were arrested for trespassing, and one was arrested for assaulting an officer.

The demonstration was the beginning of a week of action organized by the pro-migrant Quaker organisation.  The “Love Knows No Borders” activities will take place between 10 December Human Rights Day and 18 December International Migrants’ Day.

“As a Quaker, I believe there is that of the divine in all of us,” Laura Boyce, U.S. Associate general secretary for U.S. Programs at ASFC, it said in a statement.

“This conviction calls on us to stand with those fleeing violence and poverty, and call on our government to protect human rights of migrants and end border communities’ militarization. The courageous action is necessary in the face of unfounded fear, racism and violence.

Bishop Minerva G. Carcaño, from the United Methodist Church in the San Francisco Area, added:“Showing up to welcome and bless children, mothers and fathers seeking asylum from very difficult and dehumanizing circumstances is the right and humane thing to do. How we act in these moments determines who we will become as a nation.”

Other groups and religious organisations, including the American-Islamic Relations Council, the United Methodist Church and Jewish Voice for Peace, will join ASFC for the activities and demonstrations called “Love Knows No Borders.”

The organisation is also calling on Congress to stop support for the Immigration and Customs and Border Protection agencies.

Thousands of migrants are camped out in Tijuana, having made the long journey to the U.S. border in the hopes of claiming asylum in the U.S.

Some beautiful churches and synagogues in Muslim-majority countries