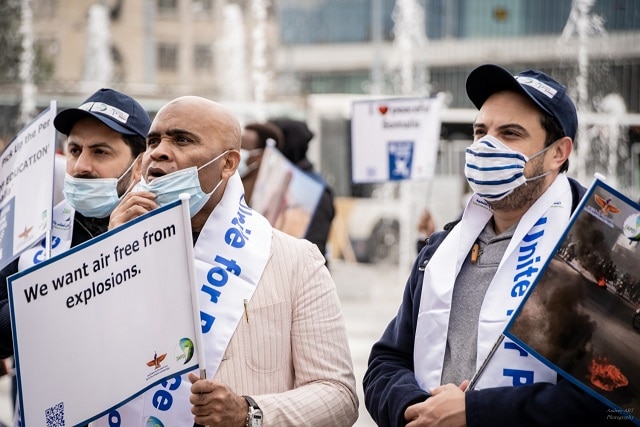 or the third year in a row, Maat for Peace, Development and Human Rights (Egypt) & the International Alliance for Peace and Development (IAPD) organize a peaceful stand in front of the United Nations Office at Geneva, under the slogan “Unite for Peace”.

This stand comes within the framework of the celebration of the International Day of Peace and on the sidelines of participation in the 45th session of the Human Rights Council, in order to shed light on the dangers of terrorism and its destructive effects on the countries that have suffered from terrorism attacks.

The stand included many participations and demands from youth and civil society actors from different countries, as the Somali immigrants in Geneva have articulated the dangers to which children in Somalia are exposed as a result of their recruitment by the Qatari-backed Harakat Shabab Al-Mujahidin, and their exploitation as mercenaries in terrorist operations and wars outside Somalia, such as in Libya.

The Somali volunteers have also participated in a musical performance to support children in Somalia and re-integrating them back into society.

Mrs. Nezahat Ergüneş, a Turkish immigrant and a representative to the Kurdish Association of Lausanne in Switzerland, and a former assistant mayor of Turkey’s Bostancı city.

During her speech, Ms. Ergüneş called for the necessity of confronting the Turkish aggression that aims to stretch its arms on the city of Kobani, after attacking the city of Afrin, Ras al-Ayn and Tell Abyad.

Ergüneş also adressed the violations committed by the Turkish regime against Kurdish minorities both inside and outside the state, in addition to Erdogan’s persecution of his political opposition and critics.

And under the slogan “Unite for Peace” that was chanted by Kurdish tongues in the Peaceful stand, Ms. Nezahat Ergüneş called on the United Nations to take concrete steps to protect the persecuted Kurdish community, while holding the international community responsible for preserving the life of the PKK leader Abdullah Öcalan. 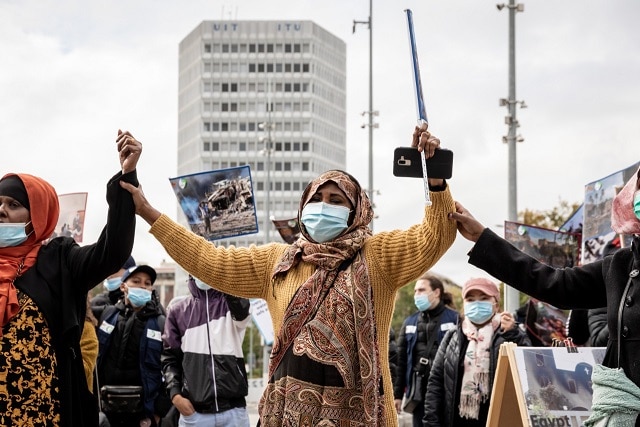 Ms. Argunesh concluded her speech by saying that after months of fighting, ISIS were defeated and driven out of the Kurdish city of Kobanî, thanks to the courage and steadfastness of its women.

Therefore, the city which became emblematic of women’s fight back and revolution, has become a target of the Turkish government.

During the stand, the participants have also displayed some photos and video clips documenting the crimes and violations committed by the Turkish occupation in northeastern Syria and its use of internationally banned weapons. 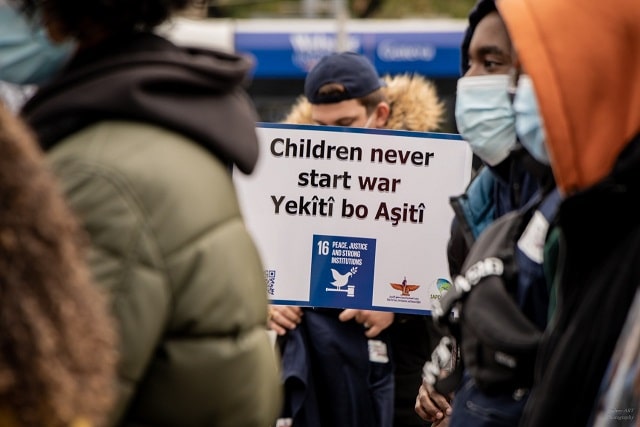 The violations committed by the Houthi group against women and children in Yemen were also raised during the speech.

A number of photos and video clips documenting the extent of the violations committed by the Houthi group were displayed.

The recent of which violations was the massive attack on Saudi Arabia’s Abha International Airport and the killing of a Yemeni young man after he was tortured for six continuing hours.

The terrorist offensives carried out in Libya were also raised during the peaceful stand.

The participants have recommended the UN investigation committee, established in 2020 by a decision of the Human Rights Council on Libya, to make the investigation in Turkey’s support for the Libyan militias and its deployment of foreign fighters and mercenaries in the country among its top priorities. 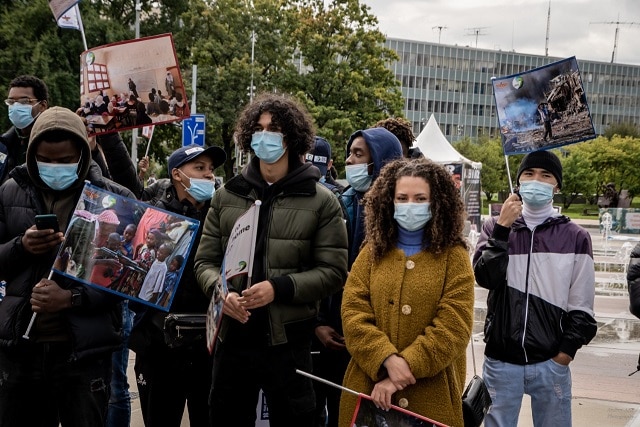 The Beirut Port explosions were also brought up for discussion during the stand. The explosion crisis, coupled with the Coronavirus, has worsened the suffering of migrant workers. And many pictures and video clips of Ethiopian workers gathering in front of the Ethiopian embassy in Lebanon, hoping for returning homes after being out of work for 6 months and the sponsor’s inability to pay their financial dues.

The anger of the migrant workers was increased by the reluctance of the Ethiopian Consulate in Beirut and the Prime Minister Abi Ahmed to take an action in favor of the workers and their requirement to pay exorbitant travel and quarantine fees.

The participants also presented, through the photo gallery, the terrorist incidents that took place over the past few years, which hit many countries of the world such as (Germany, Nicaragua, the Netherlands, Spain, England, and Canada).

Additionally, a minute of silence was observed in the memory of the martyrs and victims to the terrorist operations. The participants of the peaceful stand have called on the United Nations and international organizations to pressure the state sponsors of terrorism to immediately stop enabling and backing these groups through providing them with safe havens, media platforms and logistical support. The participants have also appealed to the United Nations to provide support to citizens in conflict countries and those affected by terrorist operations, and to work for the reconstruction of countries affected and stricken as a result of bombings and terrorist operations.

The peaceful stand was concluded by a message sent to the whole world.

follow this link To watch the video of the peaceful-stand : https://bit.ly/3jy3sj

The court's decision should not be discussed on social media: Syed Mohammad Ashraf Kachuchhovi