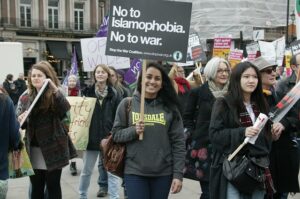 t is due to the Extremist Religious Interpretation of the Extremist Radicals which provide “Grants” to add more fuel to the fire which causes further alienation, stigmatization and widespread stereotyping of Muslims inevitably leading to violent Islamophobic attacks upon innocent Muslims.

Such extremism has metamorphosized into a Disastrous Communal Chernobyl !

Such extremist religious leaders must be depreciated & dismembered from the mainstream narrative by the wide majority of peace loving muslims.

It is the responsibility of Muslims to contain these divisive propagandists, who continue to doggedly spew formaldehyde extremist and radioactive radicalism on digital media all accross the world causing instability, nihilism and widespread anarchy that is an impediment to Interfaith harmony.

Such narratives make the work of Interfaith activism all the more challenging. The efforts of peacebuilding voices at the grassroots level are regularly debilitated due to the growing intolerant interpretation of Islam by such extremists.

These Extremists might be very scant in number but their outreach work of promoting hatebuilding has tremendous outreach within the masses, they achieve stupendous success In exporting their twisted interpretation of Islam and their detested and execrable brand of extremism, which has resulted in moral bankruptcy of these self declared fear and hate mongerers.

Traditionally in Islam, under Muslim ruled autonomy Religious minorities have been protected and granted their rights.

The extremist interpretation of Islam, by these extremists is living threat to the Islamic peaceful way of life of almost 2 Billion Muslims.

The overwhelming ascendancy of religious extremism has been the capability of these Radical Islamists prowess to advertise and digitize it’s perverted extremist idealogy to knuckle headed youth on social media.

In today’s world after Public enemy number one COVID-19 we are threatened more by Religious Extremists.