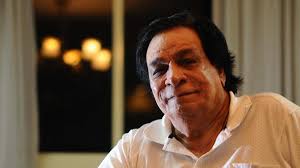 he veteran actor-writer-comedian Kader Khan died in Canada early morning on Tuesday . A few years earlier in March 2009, Kader Khan made contact with Jamia Al-Karam and talked with Vice-Principal Bakhtyar Pirzada al-Azhari as he was looking for the published works of Shaykh Muhammad Imdad Hussain Pirzada, especially the books on Arabic Grammar and Quran commentary — Imdad al-Sarf, Imdad al-Nahw and Tafsir Imdad al-Karam — as he travelled to Dubai in London. He subsequently received the books from Jamia Al-Karam‘s Head of English, Mr. Imran Hussain, to whom Kader Khan offered his appreciation and expressed great joy in receiving those books he had pursued for some time. He stated his wish to visit Shaykh Pirzada and see Jamia Al-Karam ‘s work if time permitted in a future trip to the UK.

An unknown aspect to many of his life is that Kader Khan was the son of a religious scholar, Maulana Abdul Rahman Khan from Kabul, who migrated to India and remained there after partitioning and then moved and lived in Holland where he set up an Arabic and Islamic Studies centre. In the height of his son’s success, Maulana Abdul Rahman asked his son to come to the study of Arabic and Islam, and to equip himself to continue the religious work of his father to educate the common man to understand Islam without misinterpretation of modern age. His father said, ‘If you can make it big at Bollywood, you can make it big if you go back to Islam, Arabic and Urdu!’. Following his father’s words, Kader Khan graduated in 1993 from Osmania University Hyderabad with an MA in Arabic Literature and Islamic Studies and spent a number of years developing himself and eventually founding the KK Institute of Arabic Language and Islamic Studies in Dubai and then in Canada. Throughout his latter years, his research, throughout view of his father’s legacy, occupied him with the goal of simplifying Islam for the common person of today’s world. He was looking for the books of Shaykh Pirzada in this pursuit.

Allah grant him forgiveness and mercy in his journey into the hereafter. Amin!