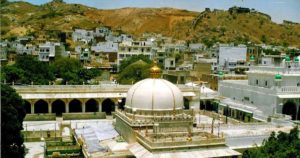 Nearly a thousand years ago, a new and powerful nexus of spiritual transmission emerged in Central Asia and lasted for five centuries, culminating in the work of the Khwajagan, or “Masters of Wisdom.” Like India’s much earlier Rishi Pantha, these masters of Central Asian Sufism were not renounced, but advocated maintaining an active connection with the world, including raising awareness. They exerted a remarkable influence on Central Asia’s destiny, and subsequently Hindustan lies in their almost unparalleled depth of spiritual perfection, yet their chief significance.

The venerable Khwaja Muin al-Din Chisti (1142–1236 CE) was the most well known and prominent member of the Order of Masters of Wisdom in Hindustan.

Although Khwaja Muin al-Din wrote many treatises, one of them attracted my interest most: Risala i-Sarmaya i-Jog (Treatise on the Nature of Yoga) by Khwaja Muin al-Din Chisti. In this treatise, the knowledge contained therein is said to have been spontaneously conferred by the Holy Prophet Muhammad himself or through Khwaja Uthman Harwani upon the venerable Muin al-Din. The Venerable Khwaja Muin al-Din warns those to whom the teachings reach not to reveal them to the uninitiated, and discusses yogic practices that link them to the knowledge revealed to him from the Ascension of the Holy Prophet Muhammad on the night of Al Isra wal Mairaj through the Astral Realm and features meditative diagrams to illustrate cosmological doctrines.

2020 marked the 808th anniversary of his passing.  Every year, his shrine at Ajmer draws millions of devotees from all backgrounds.

The composite teachings of Khwaja Muin al-Din point to a philosophy of the universe in which not only today’s set theological borders but also the strict separation of soul from matter [dualism] are not even conceivable.