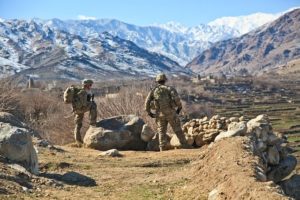 IT is criminal parenthood. Indeed, the last 30 years can be compared to a scenario where a parent decides to place his kids on the chopping block in return for promised grand lifestyles. The local Kashmiri Muslim (couldn’t have been a Hindu) leadership in the valley (of two types: mainstream and separatists) negotiated with the lives of gullible Kashmiris for their (mainstream) guaranteed grip on the highest chair in the former state and the other (separatists) for guaranteed income and security from both sides of the divide.

It’s been a spectacular change from being a fun loving Kashmiri to a completely indoctrinated one, like a well-programmed robot, inhuman and deeply communalized poison. Even from being an person running at a CRPF cop’s site (may be throwing a few stones from a distance that would fall well short of target) to the one shouldering AK47 out to kill someone (on orders), it’s a remarkable change in the very psyche. It is a tragic tale of how cynical politics will dehumanize generations that those smiling innocent faces will one day be found masked and concealed in the jungles (or, under cover in some households) instead of enjoying a movie in a cinema hall or indulging in some prank on the roads as a college-going student.

However, the question is: how and why a community – mostly illiterate until 1953 – managed to shake the Indian Nation State out of its wits and deep sleep and dispatch the Pandits – a category of 100% loyalty to the Indian Union – to an indefinitely long journey from the valley to reside in camps in the various parts of the country to which they owed (owe) allegiance to, just within 37 years of their getting educated (courtesy: education policy of Late Sri Bakshi Ghulam Mohammed)?

Out of his quest for unchallenged political influence, Sheik Mohammad Abdullah was regarded as the highest leader of Kashmiri Muslims and his political ambivalence was comparable. He tried relentlessly to water the seed of separatism in Kashmir while portraying himself as a ‘Delhi politics’ victim. His throne successors (from his family) also continued to blame Delhi for what they perceived to be broken promises. Sheik had no pressure to endorse the 1974 agreement but he chose to become a party to it for certain political reasons.

The Congress supported chief ministers (from Delhi) such as Ghulam Mohammad Sadiq and Mir Qasim were like stop gap arrangements (1964-1974) whose political affiliations were not very established either.

The only non-opportunistic political figure-with strong acceptance of the accession instrument-was Sri Bakshi Ghulam Mohammad; twice PM of the former Jammu & Kashmir state and who.

Introduced much growth in the valley; created employment in the state and made education (including university level) more effectively free for all. Free education and job creation and transportation network expansion contributed to the rise of Muslim middle class in Kashmir. Besides his undisputed allegiance to the Indian Union he was a genuinely secular citizen. In 1963/64 his resignation under Kamraj’s plan was accepted. Jammu & Kashmir’s era of having a PM ended with his resignation, literally.

Post 1974, the era of dynasty politics began as well as blaming Delhi for all the ruling elite’s internal ills.

The Founding of Bangladesh:

Jamaat-e-Islami professed Bangladesh’s birth as India’s deliberate and well-planned political scheming solely to decimate Pakistan, which was not just inconceivable but also inacceptable to them. When translated into English, the argument was “India has destroyed Pakistan and now it is our responsibility to do something.” So, the preparations began right earnestly for teaching India a lesson by preparing Kashmir’s secession from her custody. In reality, Jamaat-e-Islami was the doer (prime mover) and other designated mainstream political parties / separatists secretly supported his political goal.

Jamaat-e-Islami had a knack to maintain good personal ties, while remaining steadfast in their political goal. It was quite a ritual for their leaders to tell Pandit friends that they would have to leave the valley one day, in some years to come, and that a very large scale of bloodshed was expected. Some of them will smilingly say “Pandit ji you’re building this home, but it’s going to come into our hands one day.” The Pandit friends were never able to get the message through, because the entire plan and its execution were very smartly kept a top secret.

For the Jamaat-e-Islami Pakistan came very handy and the porous frontier allowed cross-border movements without anyone raising an eyebrow. Never knew if any money at the crossing points has changed hands!

But, as some commentators might make the world believe, the 1989 insurgency did not erupt suddenly but its beginning was made in 1971.

Although a serious and dedicated political operation was organized very quietly, the farce of mainstream political parties was in full swing as they helped grow anti-India sentiments by leaps and bounds by defacing every institution that left the youth confused and disillusioned with India. The process was started by Sheik to help grow discontent in the valley because he had accepted to be CM instead of PM of the former Jammu & Kashmir state (under the agreement of 1974) for that reason alone. It was a widely circulated reply from right-hand Sheik Mirza Mohammad Afzal Beg to educated unemployed men, “now is not the time to search for work, it is time to start preparing for the war against India for Azadi.”

His family members continued the tradition and a new political outfit was born and christened as the People’s Democratic Party (PDP), as if to add spice to pakodas. Driven by a communalist rank and suspected to be responsible for the 1988 Anantnag riots as well as his daughter’s abduction in 1990. The PDP came into being in 1999; it’s worth noting that when pandits were thrown out of the valley their founder was India’s Home Minister (HM). He was rewarded with HM ‘s post even though there were charges against him for engineering 1988 riots. What an Indian State Compromised!! And all local Kashmiri leaders were in league to dismember India.

The incongruity of the situation was that the so-called Hindutva leadership was in full praise of the PDP chief and they were busy coining ‘Kashmiriat, Insaaniyat, Jamhooriat’ thus supporting the expulsion of the Pandits from the valley strengthened Kashmiriat and Insaaniyat! While the NC and others were busy issuing their own selves certificates concerning universal brotherhood!

Those who claim to have led Kashmir’s movement for India’s independence ended up disgracing the word ‘chief.’ They never fought from the front; they never faced any suffering from the security forces; they never came out in the open to question their imagined oppressor; they never went out of their lane, mosque or mohalla to address meetings at different locations in the area. When the youth was being eliminated by security forces, the leaders put forward a stone pelting gang of youths only to destroy their lives and yet ensured that no scar ever touched them or their family members. Their only rendezvous used to be the Pakistani Embassy in Delhi which, although served with Pakistani delicacies, inflated their sense of being. There couldn’t have been a better way for a parent to place his kid on the chopping block while eating biryani across the border with the ‘thousand cuts’ instigator theory cum collaborator.

Malcolm X and his leadership of Black American Muslims