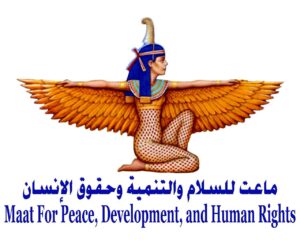 n an urgent communication to the UN Special Procedures … MAAT calls on the Qatari authorities to reveal information about the forcibly disappeared Syrian citizen.

Okeil: We hold the Qatari authorities accountable if anything bad happens to him, and we call UN experts to visit Qatar and reveal the fate of the forcibly disappeared.

Sherif Abdel Hamid: Qatari laws undermine human rights, and the incident of the Syrian citizen is not the first.

Maat for Peace, Development and Human Rights submitted a written intervention to the Human Rights Council in Geneva during the work of the 45th session of the Council, regarding the Qatari authorities’ arbitrary detention and enforced disappearance of the Syrian citizen, “ABDUL RAZZAK AHMAD ERZAIK,” and the association mentioned that it had received documents from the brother of the disappeared, stating that three people wearing civilian clothes kidnapped him and took him to an unknown location.

In order to examine the facts of the forcibly disappeared, to make the results of the investigations public, and to move swiftly to reassure the families of the disappeared and detained about their families.

Okeil added that the Qatari authorities did not inform the family of the disappeared of any details, nor did they allow them to communicate with him, and the human rights expert called on the Qatari authorities to immediately guarantee his full rights, and release him, holding them fully responsible if anything happened to him, and demanding that he not be subjected to torture or any harsh treatment.

For his part, Sherif Abdel Hamid, Director of the Research and Studies Unit at Maat Association, said that Qatari laws undermine human rights, especially basic freedoms, as Qatari legislation allows a person to be detained for a period of six months without communicating with the outside world, which explains the increasing number of forcibly disappeared and arbitrarily detained persons. in Qatar.

Abdul Hamid added that the case of the disappearance of the Syrian citizen, “ABDUL RAZZAK AHMAD ERZEIK” was not the first, as the Qatari authorities, during the past year, arrested Walid Abdel Aziz and Ali Muhammad Salem, both Egyptians living in Qatar, without charges or even informing their families of any Details indicating the circumstances or reasons for their detention and preventing them from communicating with them, and Ali Salem, one of the founders of the Qatari Al-Jazeera channel, remained in custody for eight months, after the Qatari authorities known of his intention to leave Doha permanently and return to Egypt.

The extremist narrative of anti-blasphemy killings: A Refutation