Okeil: The international community has set a goal to end child labor by 2025, and Coronavirus is hindering the way of achieving it. 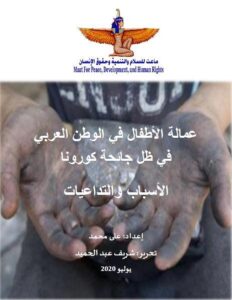 Maat for Peace, Development and Human Rights issued today, July 27, 2020, a report entitled “Child labor in light of the Coronavirus; the causes and consequences”, which examined the alarmingly growing phenomenon of child labor in the Arab region, even before the Coronavirus crisis, as well as the negative repercussions of the Corona pandemic on child labor, based on the reports and estimates of international and regional organizations, and how to work to make the necessary efforts to eliminate this phenomenon.

The report also touched upon the international and regional agreements that aim to reduce the spread of child labor, as well as the deficiencies in the national laws and legislations of some Arab countries, which indirectly contribute to the exacerbation of this phenomenon, along with the role played by civil society in this regard.

The report pointed out that in light of the continuing outbreak of the Coronavirus and the expectations that the number of injured people will grow to surpass 16 million people, among whom 645 thousand people have died around the world, children, among other groups, are first to suffer the devastating consequences of this pandemic that resulted in severe economic shocks and huge disturbances in the labor market.

Asia and the Pacific ranks second with more than 62 million children in child labor.

The remaining child labor population is divided among the Americas (11 million), Europe and Central Asia (6 million), and the Arab region with its 22 countries which are the member states of the League of Arab States. No comprehensive regional estimates of child labor in the Arab region are available, however, they are estimated by 2 million children, and 56% of all those in child labor, actually live in middle-income countries.

Ayman Okeil, President of Maat for Peace, stated that the international community has set a goal to end child labor by 2025, within the framework of the 2030 sustainable development agenda, which includes seventeen goals for sustainable development and 169 goals aimed at guiding international development efforts for the next decade. According to the goal Eight of the Sustainable Development Goals, which is related to decent work and economic growth, under its seventh point, countries were urged to “take immediate and effective measures to eliminate forced labor, modern-day slavery and human trafficking, and ensure the prohibition and elimination of the worst forms of child labor, including their recruitment and use as soldiers by 2025.”

Okeil added that the economic repercussions of the pandemic may lead to an increase in the number of children who are exploited at work, and that it would also undermine the legislation designed to protect children from work, which deprives them of living their childhood, undermine their potential and dignity, and adversely impact their physical and mental development. The pandemic may also hinder the way of achieving the sustainable development plan to end child labor by 2025.

The chairman of Maat for Peace also noted that shutting down schools not only prevented access to education, but also withheld a source of shelter and food for millions of children. According to UN reports, there are about 370 million students around the world who have lost their school meals during the Corona pandemic, which is often the only source of nutrition they depend on.

For his part, Sherif Abdelhamid, Research and Studies Unit Manager at Maat, said that children do face difficult humanitarian conditions even before the Coronavirus crisis, due to the conflicts taking place in some Arab countries, as well as because of the deteriorating economic situation and high rates of poverty, as up to 66 million children were already living under precarious social and economic situation.

Thus it can be said that children are the first and most suffering in situations of conflict and disasters, as nearly one in four children live in countries affected by conflict or disaster.

The global estimates of the International Labor Organization have established a strong relationship between child labor and conflict and disaster situations. For example, the nearly nine-year-old war in Syria has left 5 million children living in destitution, and more than 2.5 million children have become refugees outside the country, and the conflict in Yemen has given rise to the worst humanitarian crisis the world has ever seen, and in Libya, Somalia, and South Sudan – and many other places – children pay the heaviest price, as more than 30 million children are displaced around the world due to conflicts and disasters.

To view the report: https://wp.me/p7JoPU-6UY 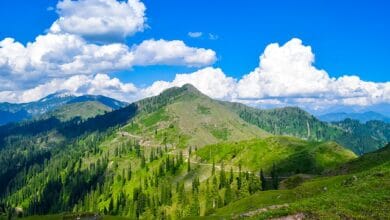 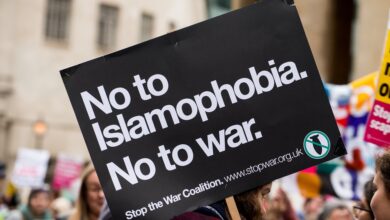 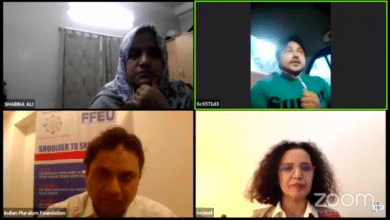