Facebook Twitter LinkedIn Tumblr Pinterest Reddit VKontakte Odnoklassniki Pocket
500
Word For Peace
Discern nonetheless but Me (Real/Eternal Self) is the ‘Lord’,
Only Ignorant say that the Lord is someone else or along with others.
Editorial Note: Just as Mansur al-Hallaj’s assertion of “Anal Haqq” (I’m the Truth) in Sufism is the highest culmination of spirituality, similarly the Vedic beleif in “Aham Brahmasmi” (I’m Brahma) is an evolved understanding of Sanatan Dharma……
Origin & Establishment:
‘Satyug,’ ‘Tretayug,’ ‘Dwaparyug,’ and ‘Kalyug’ are the four periods (YUGAS) that Nature has split the endless time into. Kalyug is the current era. According to natural laws, the ‘Satyug’ – the Golden Era – will inevitably follow the ‘Kalyug’. As a result, it is imperative that we all educate ourselves on the coming ‘Satyug,’ so that we are mentally prepared for the imminent change and are capable of molding ourselves accordingly. Satyug Darshan Trust’s greater spiritual vision is an extended transformation of the ‘Mahabir Satsang Sabha,’ which began in a little town called Gojra Mandi, District Layalpur (now in Pakistan) in the form of daily ‘Satsangs.’
This is the broader spiritual vision of Satyug Darshan Trust, an expanded transformation of ‘Mahabir Satsang Sabha’, which originally started in a small town called Gojra Mandi, District Layalpur (situated now in Pakistan) in the form of daily ‘Satsang’.
After the partition of the country in 1947, the followers of ‘Mahabir Satsang Sabha’, who were spread all over the northern India and later in other parts of the world started ‘Satsang’ at their homes.
This continued till 1995 when Satyug Darshan Trust was founded and registered as a Public Trust on 12th July 1995 with the objective of alleviating physical, mental and spiritual sufferings of humanity. Since its inception Trust has undertaken various activities to fulfill its charter which is to infuse consciousness, fraternity and love for humanity by all possible means.
Major Objectives and Activities:
In fact, the establishment of Satyug Darshan is a step in this direction for realization of natural spiritual urges of mankind. It inspires one to eradicate selfishness and pride i.e. agitated state of mind, and transform one from the restless ‘Kalyug’ temperament to a tranquil and stable ‘Satyug’ disposition. It conducts a study of mankind and human affairs viz-a-viz spirituality, with an intent to reduce human sufferings and to improve life specially by social and spiritual reforms collectively. 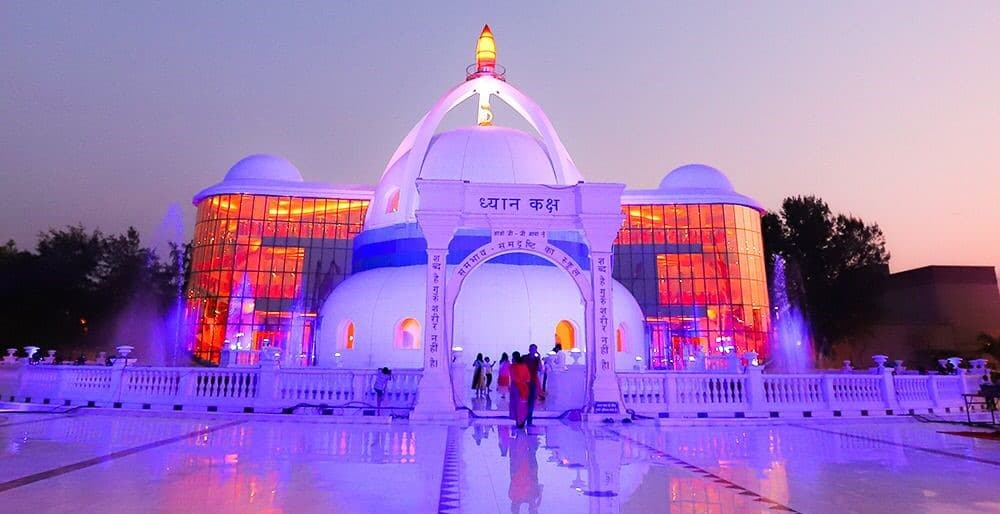 The activities of the Trust are guided by the Holy Scripture – ‘Satvastu Ka Kudarati Granth’, which means – “Sacred Scripture of Satyug as revealed by the Nature”.
It proclaims omnipresence of the Supreme Being with message:
“Discern nonetheless but me (Real/Eternal Self) is the ‘Lord’ “
” Only Ignorant say that the Lord is someone along with “
Accordingly, it further emphasizes that: “‘Shabad’ (i.e. the word of God) is our Guru (i.e. Master) not the figure or image of any person “.
This ‘Granth’ therefore preaches that, instead of different kinds of prevalent systems of devotion, only one type of faith shall prevail universally, i.e. to inculcate the skill of equanimity and even-sightedness which would help in keeping our energy, wisdom and mind at the prime level forever. It makes one’s faith strong enough to gain knowledge that one’s Real Self in itself is the ‘Lord’ omnipotent, omnipresent and omniscient. This reveals the truth that in ‘Satyug’ oneness shall prevail. Instead of the silent repetition of the mantra or the name of any deity by way of devotion or by worshipping or by chanting of hymns, one shall always remain in the state of Meditation. In ‘Satyug’, each one would be a lover of truth having high integrity and uniform vision and would love to live in harmony. Further, the natural science would make the people of ‘Satyug’ so enlightened that they would become spiritually capable of producing any thing technically and skillfully with brilliance.
Therefore, to become a symbol of equanimity and even-sightedness one ought to have an unflinching self-confidence and firm faith in God with one’s divine eye focused on the embodied spirit i.e. eternal light. All these virtues are essential for universal brotherhood for keeping harmony and peace, besides performing one’s worldly duties selflessly, sincerely and faithfully to attain salvation.
It declares, that each one of us should know and remember that: “The day is about to come when ‘Kalyug’ will retreat. That day is about to come ‘Sajanji’, that day is about to come”.
‘Satvastu ka kudarti granth’ has not only comprehensively described the past and the present state of affairs of the Universe, but has also forecasted in detail about the constitution of ‘Satyug’ i.e. fundamental principles, according to which spiritual, mental and physical conduct of a person shall be governed in ‘Satyug’.
It contains perfect knowledge, verified and verifiable truth to make every one wise enough to lead a peaceful life collectively, truthfully and religiously based on ethical principles i.e. strictly according to the rules of morality.
To keep one’s thought, action and speech in a pure and independent state i.e. free from any deformation, it suggests to remain firmly dedicated to His command. Further to keep our mind free from any pulsation, it is essential to root our existence in the divine source of Universe i.e. God.
It calls upon each one of us to become ‘Sajjan’ in the real sense i.e. a person having a spirit of gentleness, which is essential to live in a divine manner.
It prohibits one from being in the state of depression, weeping, lamenting or negative thinking in any moment or circumstance
It narrates reasons for degeneration of morality in mankind over various ‘yugas’ or eras and shows the way ahead for mankind and society to uplift themselves from their current ethical and morally deteriorated state. It has also mentioned troubles, which befalls upon one as the result of one’s own deeds.
Development of Dhyan-Kaksh: 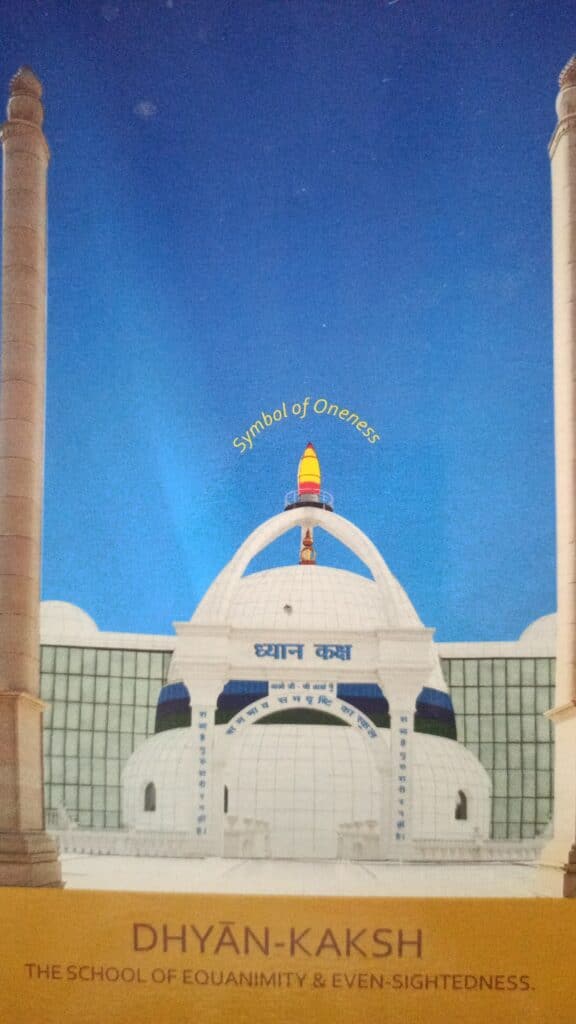 In the midst of calm, serene and pollution-free campus, the magnificent Dome-shaped, School of Equanimity & Even-sightedness, is an unprecedented and unique architectural marvel, surrounded by a water body. The main gate of Dhyan Kaksha is preceded by seven other gates. These seven gates are symbolic of humane virtues i.e contentment, endurance, truthfulness, righteousness, equanimity, selflessness & benevolence respectively. The purpose of these sequential gates is to help a person introspect the level of virtues needed to become a real human being.
Established by Satyug Darshan Trust in its Vasundhara campus, Dhyan-Kaksh is a marvel of the modern architect and is also known as School of Equanimity and Even-Sightedness. Inaugurated on 26 January 2014, the science of inner dimensions is taught through a systematic process of meditation from here. The establishment of Dhyan-Kaksh is a symbol of the Golden Era, i.e. Satyug and pride of humanity.
At Dhyan-Kaksh, one is groomed as per moral characteristics of an ideal human being to mentally perform righteous conduct and ethos to be eligible to do work with selflessness. So that their instinct – memory and intelligence become pure. Thereby remaining free from result of karma and three taap one can live their life meaningfully to obtain salvation. 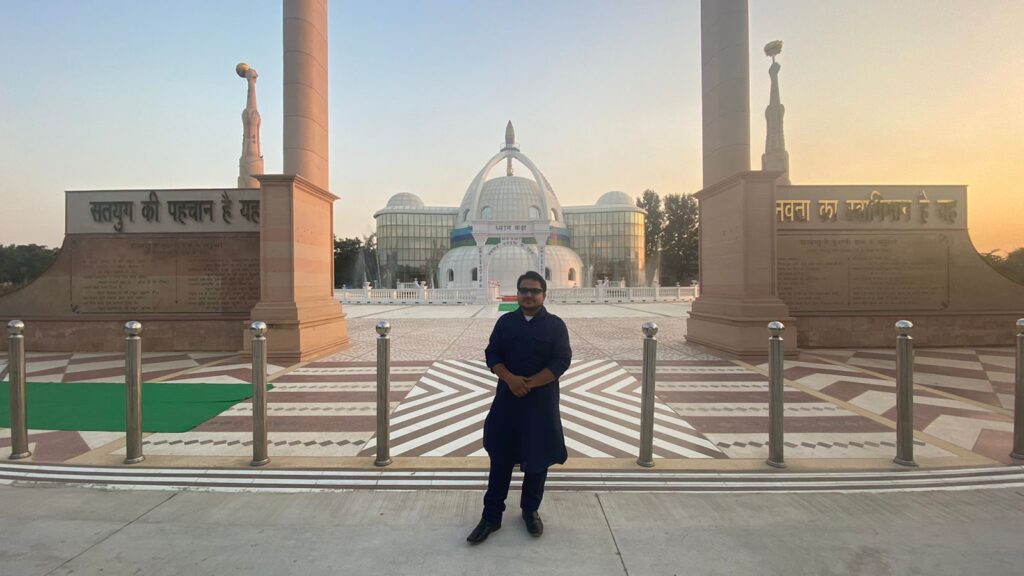 Here, one is introduced with their immanent power of wisdom and virtues, especially while doing one’s duties truthfully by remaining identic on their basic dharma in this mundane world. Thus their spiritual power is not to be weakened when facing challenging worldly circumstances. Also by keeping faith on the eternity of soul and Supreme Soul, the eternity of life and values one can self-dependently become a gentle person with confidence.
(Note: The piece is based on the recent vist undertaken by the Editor-In-Chief of Word For Peace, and Sufi Writer & Scholar, Mr. Ghulam Rasool Dehlvi)
Tags
Dhyan-Kaksh Equanimity & Even-sightedness from Kalyug to Satyug Golden Era Satvastu Ka Kudarati Granth Satyug Darshan Trust School of Equanimity Shabad Word For Peace

Reactive Violence in Tripura must stop, else it will result into a big catastrophe: Syed Mohammad Ashraf Kichhouchhwi