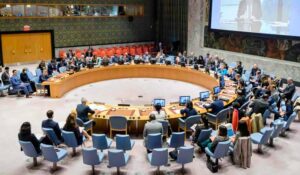 n 5 August 2019, Jammu & Kashmir was declared an autonomous Indian state and Ladakh was broken off to be an independent province. This move made Kashmir a Union Territory to be directly administrated from New Delhi, albeit with its own legislature to handle local issues. Pakistan vehemently condemned the move, pledging to raise the issue at the UN Security Council and potentially in the International Court of Justice. Eventually, Pakistan convinced its tacit ally China to call for an emergency closed door session of the Security Council on 16 August 2019, marking the first time in decades that the UN body had directly considered the Kashmir issue.

However, the Security Council urged both sides to ‘refrain from taking any unilateral action which might further aggravate the situation’ (UN News 2019). The UN Secretary-General, Antonio Guterres, also released a statement appealing for ‘maximum restraint’ and reiterating the UN’s position that ‘the status of Jammu and Kashmir is to be settled by peaceful means, in accordance with the UN Charter’ (UN News 2019).

These exchanges are characteristic of the UN’s conduct towards issues of self-determination more generally; the UN’s inherent preference over upholding state sovereign rights ensures that it remains reluctant to act or even pressure an existing sovereign state over issues of self-determination. Generally speaking, this stance by the UN has helped maintain international peace by establishing the state’s post-colonial borders as a clear and workable template for resolving interstate disputes. However, the UN’s commitment to non-interference and the principle of uti possidetis also means that the UN remains far from being a friend of self-determination as such. Rather, the UN’s position often ensures that any aspirant self-determination movement’s demands need to be accepted by existing sovereign state before the international community can even formally engage with them. Thus, most contemporary self-determination movements frequently develop an antagonistic, and sometimes combative, relationship with the state they reside in, as the case of Kashmir demonstrates.