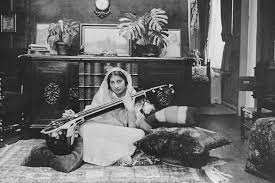 uring World War II, she spied for Britain and was finally captured and killed by the Nazis, but for decades, Noor Inayat Khan, a descendant of Tipu Sultan, an 18th-century Muslim ruler of the Mysore state, remained almost anonymous.

After author Shrabani Basu wrote Noor Inayat Khan’s biography, Spy Princess, in 2006, her contribution to the war came to light.

Britain awarded her the Blue Plaque this year, the first woman of Indian descent to be honoured with the title for her sacrifices in France as a Special Operations Executive (SOE). In Paris, she was captured by the Gestapo, Nazi Germany’s official secret police, and taken to Germany, where she was executed in 1944.

In 2014, in her honour, a stamp was issued and there are reports that her face will appear on British coins soon.

In 1949, Noor Inayat Khan was posthumously awarded the George Cross, the highest civilian award in the United Kingdom, and the French Croix de Guerre, a military honour awarded by France in 1946, for her brave efforts. 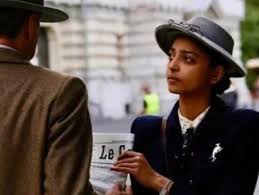 A biopic, A Call To Spy, released on October 2, pays tribute to the work during World War II of three female British spies, including Noor Inayat Khan, who was also a writer and pacifist of children’s stories.

“I think Noor Inayat Khan is one of the most extraordinary people I have come across,” Radhika Apte, who portrays Khan in the film, told Al Jazeera from London.

Apte, who starred in the hit Netflix series Lust Stories, for which she received an Emmy nomination for Best Actress, said, “She was at such an interesting juncture of being a pacifist and also her inactivity, of not doing anything, could have consequences for the war”.

Shrabani, who founded a memorial in 2012 in the name of Noor Inayat Khan, told Al Jazeera from London that Khan did not have to fight the war, but did so for her core principles of “non-violence, universality of religions, fighting against fascism and occupation”.

Noor Inayat Khan lived a largely peaceful life prior to the war and grew up to become a prolific writer of children’s stories, regularly contributing to local French radio and magazines.

Twenty Jataka Tales, an English translation of stories about Buddha’s reincarnation, was her most notable work.

Noor Inayat Khan was born on 1 January 1914 in Moscow, the capital of Russia. Her father, Inayat Khan, a musician and a Sufi preacher, and her mother, Amina Begum (previously Ora Ray Baker). The family moved to England shortly after World War I broke out in the same year.

After facing increased surveillance from the British for his pro-India views, Inayat moved the family back to Paris in 1920, where Noor Inayat Khan lived with her three younger siblings until the age of 26. Her great-great-grandfather Tipu Sultan died in 1799 fighting against British rule in India.

After the Nazis captured France in 1940, Noor Inayat Khan’s life came to an abrupt halt and, along with thousands of other French citizens, fled for the second time to Britain.

Immediately after her arrival, she joined the war effort, signing up as a wireless operator for the Women’s Auxiliary Air Force, a female auxiliary to the United Kingdom Royal Air Force – a job that Shrabani said she excelled at.

“To Noor Inayat Khan, the ideology of the Nazis and their pogrom against the Jews was fundamentally repulsive and opposed to all the principles of religious harmony that she been brought up with by her father,” Shrabani wrote in Spy Princess.

“She was Muslim by birth but she had loved a Jewish man, and Noor felt the urge to do something to help the war effort.”

Khan’s father, Inayat, was a prominent preacher of Sufism—a mystical practice of Islam.

According to Shrabani’s Spy Princess, Inayat was a strong believer in non-violence and the unity of all religions, concepts that Noor internalised growing up. Her father died in 1927 on a trip to India, leaving 13-year-old Noor, the oldest child, to help her mother raise her siblings.

“From a young age, Khan was already someone who was always very intrinsically selfless and self-giving,” her nephew and leader of the Inayati Order, Pir Zia Inayat Khan, told Al Jazeera.

Noor has always stood up for those who have been subjugated, Pir Zia added, no matter what their background.

“She was willing to make a sacrifice for the oppressed. Although she was not British, she served their cause, and after that she would stand for Indian independence,” he added.

Noor was a strong believer in Indian freedom fighter Mahatma Gandhi’s struggle to end British colonialism on the subcontinent. According to Spy Princess, she told her UK army recruiters that she might have to support India over Britain once the war had ended.

‘Perfect for the job’

Noor, who was fluent in French, was recruited by the Special Operations Executive (SOE), a secret British organisation that sent spies to help local resistance movements in occupied Europe.

Fully aware of the highly dangerous nature of the assignment, combined with a small amount of monetary compensation, Noor immediately accepted the offer.

In June 1943, Khan was sent to France under the code name of “Madeleine,” the first woman wireless operator to be deployed in the UK. After landing in the city of Le Mans, Noor travelled to Paris to work with the French “Prosper” resistance network.

Within days of its deployment, all the high-ranking Prosper agents were captured by the Nazis, and their wireless devices were seized, leaving Noor as the only field operator for the next few months.

Having apparently been betrayed by one of her colleagues, she was captured by the Gestapo in October of the same year and taken to Germany a month later.

The Gestapo considered Noor a very dangerous prisoner, who had never given up anyone to the Germans, and had tried to escape twice under their watch, according to the accounts in the book.

She was tortured and shackled during her almost one-year imprisonment. Later, she was transported to the Dachau concentration camp near Munich, where she was shot alongside three other SOE agents.

According to Spy Princess, Noor’s interrogator in Paris, Ernst Vogt, said to Jean Overton Fuller, a friend and author of Khan’s 1952 biography, Madeleine, that he had never met someone like her and “admired her courage, bravery and kindness.”

“He [Vogt] once asked her whether she had wasted her life by joining the service and that her sacrifice was in vain … she replied it did not matter. She had served her country and that was recompense.”

Apte, an Indian actor, told Al Jazeera that one of the reasons she signed up for A Call to Spy was the lack of discussion about the contribution of women to the war. 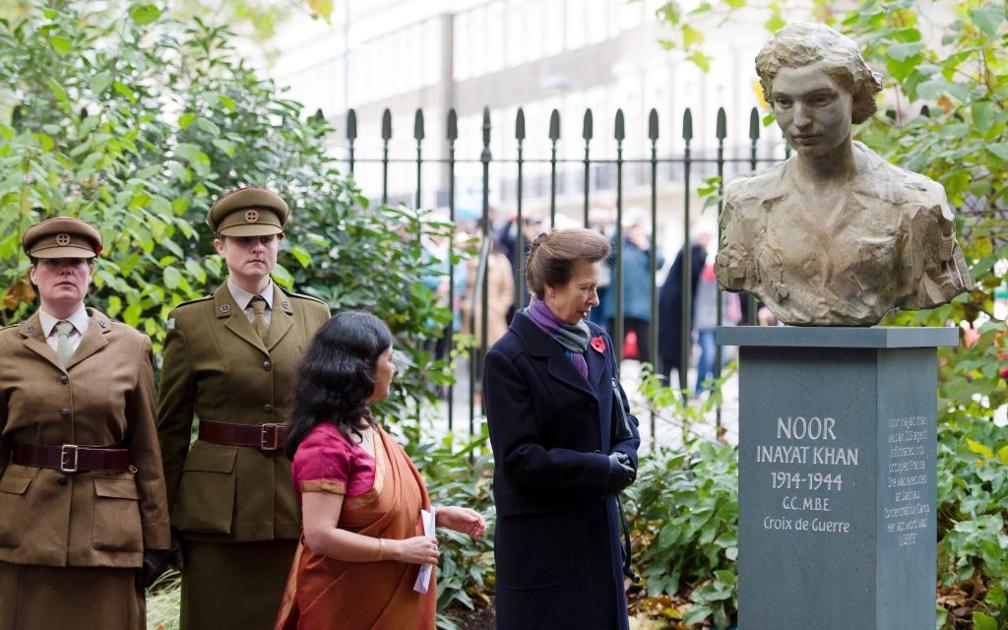 With decades passing without any public acknowledgement of Noor’s work, there has been a resurgence of interest in her story.

In August, Noor became the first South Asian woman to be awarded the prestigious Blue Plaque in Bloomsbury, where she lived, a campaign spearheaded by Shrabani. The honour is a London scheme in which a plaque of a notable figure is placed near a building in which the person worked or lived.

“She deserves this honour for her bravery and standing up for her principles. She never cracked under pressure,” Shrabani said, who also runs the Noor Inayat Khan Memorial.

In 2012, Princess Anne unveiled a statue of Khan in London to honour her heroic war.

The Indian-born writer noted that it was important to realise that the war would not have been won by allies without the likes of Noor and millions of British colonies, a fact that is too often ignored.

Experts say the contribution of people of Asian descent and people of colour to the nation-building has hardly been acknowledged at a time when ethnic minorities feel increasingly marginalised under a right-wing government.

“The understanding in the West is that Britain won this war on its own, that Churchill won it for them. They need to know there were 2.5 million people of the Indian subcontinent who came forward to volunteer for this war,” said Shrabani, whose other book Victoria and Abdul was made into a film.

“This was won on the backs of these Indians – and Noor Inayat Khan is part of them.”

Back to Divine Love with Spiritual Childhood: God as my 'Most Loving Friend'!