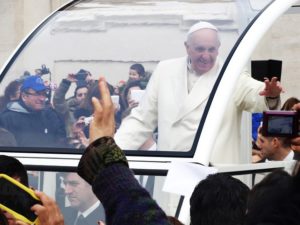 n any case, the basic rights of all human beings, particularly the most vulnerable, must be respected and secured, Pope Francis wrote in a message marking the Day of Human Rights on Dec. 10.

“While a part of humanity lives in opulence, another part is denied, ignored or infringed their dignity, and their fundamental rights are ignored or violated,” he wrote.

Such a contradiction leads one to wonder “whether the equal integrity of all human beings — solemnly declared 70 years ago — in all circumstances is genuinely acknowledged, valued, preserved and promoted,” he added.

The topics included the “achievements, omissions, and negations” found in the sense of human rights among different groups.

Pope Francis said in his message that “numerous forms of injustice” still exist in the world which seems to have no qualms about abusing, denying or even killing human beings.

Others whose human rights continue to be violated include the unborn, who are “denied the right to enter the world;” those who lack the resources to live a decent life; and those who are denied an sufficient education, he said.

The same list includes those who lose employment or are forced to work in slave-like conditions; those who are imprisoned in cruel circumstances, who are tortured or denied the prospect of their lives being redeemed; and the victims of “forced disappearances” and their families.

However, he said, there are many who live “in an environment dominated by mistrust and contempt who are the targets of acts of intolerance, discrimination and violence due to their race, ethnicity, nationality or religion.”

“Ultimately,” the pope wrote, “I can not forget all those who, in the tragic sense of armed war, are subjected to multiple violations of their fundamental rights, while the unscrupulous merchants of death are enriched by the price of the blood of their brothers and sisters.

The whole of society must play its part “with bravery and determination” in stopping such violations of the fundamental rights of people and fostering justice for all, “particularly those who are ‘invisible,’ those who are starving, thirsty, naked, sick, foreign or detained, those who live on the margins of society or are rejected.”

In his letter, Pope Francis called on all world leaders “to put human rights at the core of their policies,” including those relating to creation, “even if that means going against the tide.”

Speaking at the conference, Vatican Secretary of State Cardinal Pietro Parolin said the declaration was meant to “combine humanity’s ideals with the formulas of justice” to discourage violence and eradicate injustice.

“It’s not just a matter of identifying rights based on abstract peaceful coexistence or sustainability based on the environment or climate, but of reflecting on the fundamental conditions for coexistence between citizens,” Cardinal Parolin said.

He said, however, there are signs that the common principles that once were the document’s foundation are unraveling, so the world must have “the courage to rewrite legislation and put principles back to the center.”

Like other Catholic commentators on the 70th anniversary of the Universal Declaration, the cardinal noted the current push for new rights, such as abortion or euthanasia.

Perhaps, he said, what is needed is more dialogue about values.

“Words such as equality, freedom and responsibility are already in the human family’s vocabulary and aspirations; in reality, without them it is not possible to talk of human rights” or to hope for the conditions of peace , stability, development and cooperation which would flow from universal recognition of human rights.

“Maybe the time has come to begin a large reflection and consultation in the Church on human rights, indeed I would say perhaps on the future of humanity, being conscious that the classic question, ‘Who are you?’ has been replaced by the very subtle one: ‘What rights do you want to have?'” Cardinal Parolin said.

In Brussels, Pax Christi International marked the anniversary of the declaration of human rights, saying that now is the time to celebrate its accomplishments while examining the challenges in its implementation.

“Our partners and friends have made us acutely aware that human rights and those who try to defend them are constantly being targeted,” said a statement by the Catholic peace organisation.

“The tireless guardians of certain human rights face a shrinking space to do their job.”

Given the difficulties, the group said it remained hopeful for human rights defenders and citizens working to protect the environment and “remain steadfast in their non-violent struggle” against disarmament.

The anniversary gave Pax Christi the opportunity to reiterate its appeal for an end to violence and conflict with a view to curbing human rights violations; banning nuclear weapons; calling for better protections in the mining of precious metals and fuels; supporting civil society in its non-violent battle for human rights; and endorsing the 2030 timetable for the sustainable development goals as a key factor in advancing human rights.