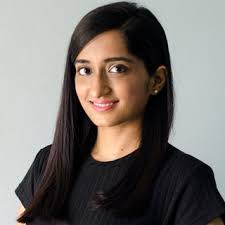 Led By Foundation is the first Leadership incubator for Indian Muslim Women, and provides experiential leadership to under-graduates and post-graduates by pairing them with mentors from the community. The programme also facilitates financial support for the participants. Led By is incubated at Harvard and pre-seed funded by them as well.

Ruha Shadab, the mind behind this initiative grew up up in Saudi Arabia. Ruha Shadab more ours, simply because it is supposed to. However, in reality, even though we definitely felt it was ours, there were certain adaptations needed,” she recollects.

In a country which calls itself secular, and for a girl who names the Constitution as her favourite book, this was a challenge – one that she would seek to overcome. “The recognition of our areas of improvement as a nation fuels my desire to pursue my dreams – a dream where India wakes up each day, stronger, closer, and healthier,” she says.

Coming from a supportive family – her father a doctor and mother who never went to college but wanted her children to do better – Ruha Shadab had worked as a physician before entering the public policy space. She worked with Clinton Health Access Initiative in New Delhi and later at Bill&Melinda Gates Foundation in Seattle (US). In between, she worked in the Young Professional programme at NITI Ayog for more than a year, and was mentored by senior IAS officer Alok Kumar Sahu and CEO Amitabh Kant.

In 2018, Ruha Shadab started at Harvard University for Master degree in Public Policy. At the Harvard Kennedy School, where studied on a full scholarship, Ruha Shadab has won Barbara Jordan Award for Women Leadership and was selected for Cheng Fellowship to design and develop a social enterprise. She was also Co-Chair at the India Conference at Harvard 2020, and selected for the Leadership Development Cohort at the Center of Public Leadership 2018. She graduated from Harvard this year as the first Indian to win their Women’s Leadership Award.

Ruha Shadab launched LedBy a year ago, to bring faculty from Ivy league universities to some of India’s most disadvantaged women – Muslim college students. Their first batch, of 24, graduated a few weeks ago. Since the programme was completely virtual, the COVID-19 pandemic did not particularly affect them, Ruha Shadab says.

LedBy aims for inclusion of women in most sectors, from education to corporate life. It also strives for inclusion and acceptance of the second most populated community in India – Muslims – with a multi-disciplinary professional leadership cohort.