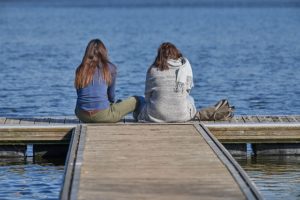 ammu, Dec 1: A Jammu-based Sikh girl won hearts in a noble gesture after agreeing to donate one of her kidneys to a Muslim friend from Jammu region’s Rajouri district.

Manjot Singh Kohli, 23, a resident of Udhampur in Jammu, is likely to lose a kidney but has won a lot of hearts after she made a big decision to donate one of her kidneys to her 22-year-old Muslim friend Samreena Akhtar, 22, who is suffering from the failure of the organ.

The news has been circulating at SKIMS hospital in Srinagar where the two friends have been waiting for the transplant surgery for the last seven months. The mother of earlier Samreen had agreed to donate her kidney but the doctors declared her unfit because of some unusual condition.

The family then went public to see Samreen’s medical condition and shared it to relatives and friends on Facebook. But no relatives turned up. It was Manjot then who approached the family and expressed willingness to give her kidney.

Manjot, a graduate girl is currently a member of the NGO based in Jammu called Anti-Corruption and Human Rights Council. Manjot ‘s gesture on social networking sites has won her all-around recognition and social media users show all love for her.

In a video, now widely circulated on social media, Manjot said her family is not pleased with the wide-ranging decision, as her family worries that Manjot will take too much risk with her own safety. This caused the operation to be postponed by the Sher-e-Kashmir Institute of Medical Sciences in Srinagar, where Samreen was admitted.

“I’m not scared of anything. My only concern is that humanity should not lose out. My family has got swayed by emotion… but I shall go ahead anyway,” Manjot was quoted as saying by The Telegraph.

“My strong belief in humanity is motivating me, and you can see the communal harmony my decision is creating…. Had my family supported me, it would have made me very happy,” she added.

Manoj said she is entitled to take a decision as an adult and no law forbids her from donating her organ. The duo, Manjot and Samreena are friends of the past four years, the duo had first met each other in an event and since then they have been in contact with each other. “The moment I got to know (from someone else about Samreen’s need for a kidney) I tested if she was my (friend) Samreen. I called her, saying, ‘I’m coming here to do that.’ I told her that I didn’t need anything from her, and that I did it for her, “Manjot told THE NEWS NOW.

The doctors at SKIMS Soura hospital postponed the operation as they awaited Manjot’s family’s permission. Samreen, who is undergoing routine dialysis at the hospital, has thanked Manjot for the much-needed help on time