An onsite intensive program of the “Madrasa Discourses” (MD) titled as“South Asian Madrasa Tradition: Exploring Neglected Histories and Unraveling New Possibilities” was organised in Gurugram, Haryana on July 17 and 18 with an effort of the Institute of Religious and Social Thought, New Delhi.

Launched in 2017 as part of the intellectually challenging project,Contending Modernities of the University of Notre Dame with participants, mostly young ʿUlamā and madrasa graduates from South Asia, the MD has now churned out three batches of young theologians well-equippedwith the tools necessary to engage modern science, technological advances, pluralistic ideas, new philosophies and a progressive theology.Led by Professor Ebrahim Moosa, asthe primary investigator of the programme, the MD initiative seeks to revitalize Islamic divinity (ilahiyaat) from within through a transformative educational curriculum. 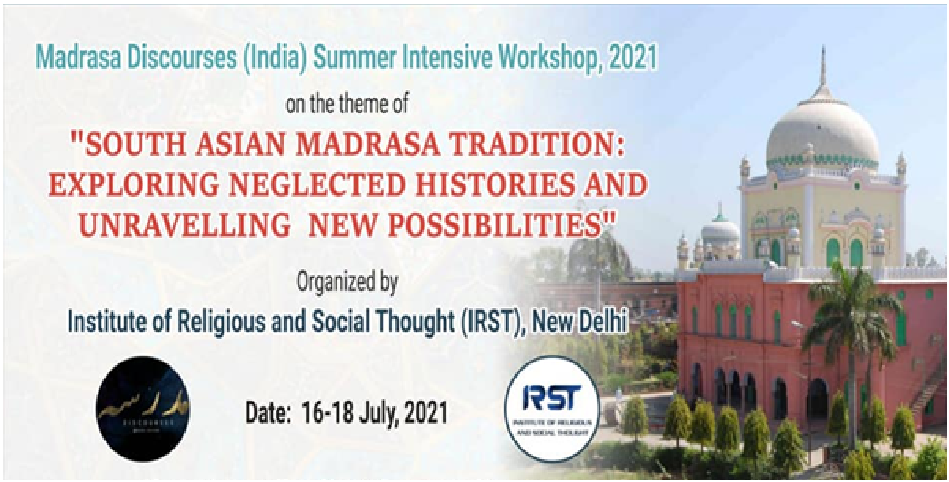 Focused on the conciliation or ‘re-conciliation’ of traditional Islamic thought with contemporary scientific progression,the three-year MD course concerns its contents more with the Muslim philosophy (Kalam), logic (Mantiq) and other “rational disciplines” (Ma’qulat) in the Madrasa curriculum, and less with the Manqulat such as the Hadith, Tafseer (Qur’anic exegesis), Fiqh (jurisprudence) or Usul-ul-Fiqh (methodologies of jurisprudence). These latter branches of Islamic knowledge tradition known as Manqulat (disciplines based on oral transmissions) which are less theological and more strictly “religious” disciplines are also incorporated in the “Madrasa Discourses” but only at a peripheral level.

In fact, the Indo-Islamic intellectual heritage is testimony to the fact that the Madrasa curriculum in the Indian subcontinent was originally conceived as a rationalist intellectual project.

The earliest madrasas in Delhi, Farangi Mahal, Jaunpur and in several parts of undivided India such as Sind, Dabel, Mansura and Multan engaged with Mantiq and Falsafa (logic and philosophy) more than fiqhand hadith. This scholastic tradition in madrasas of the Indian subcontinent flourished in the 16th century when Mughal EmperorJalaluddin Akbar took personal interest in Islamic divinity, philosophy and theology and thus Indian madrasas fostered Ma’qulat (rational disciplines) in their textbooks and carried on with this rationalist legacy until the mid-19th century when the British colonialism resulted not only in the loss of Mughal power but also adversely impacted the Muslim intellectual tradition in India.

Dr Waris Mazhari, Professor in Islamic studies at Delhi’s Jamia Hamdard University, who also serves as lead faculty for implementing the Madrasa Discourses project in India, traced these historical intellectual moorings of madrasas in the Indian subcontinent. In his stimulating PowerPoint presentation followed by an engaging question-&-answer session, he dwelt on how the rationalist disciplines or Ma’qulatreceived great patronage during the reign of Muhammad ibn Tughlaq (1351 AD), and how the arrival of Sheikh Abdullah and Azizullah in Delhi and Sanbhal in the 15th century after the destruction of Multan, and especially the advent of transcendental Ulama in India and the arrival of Iranian scholars such as Mir Fatehullah Shirazi (1589 AD) in the era of Emperor Akbar played a pivotal role. 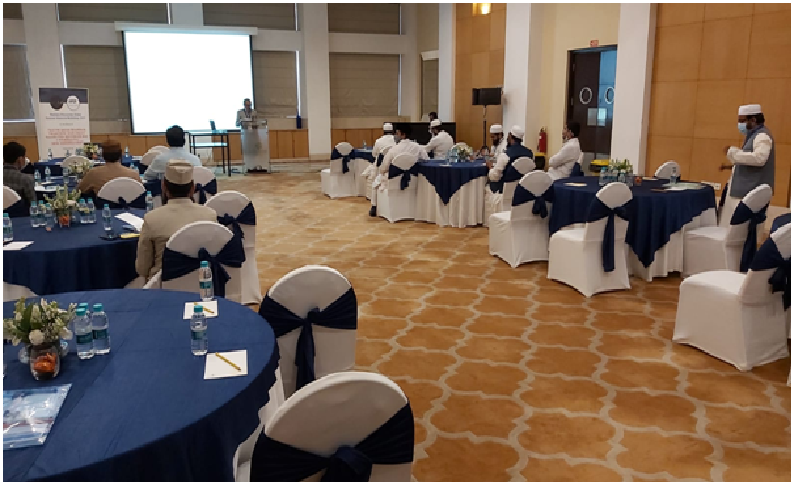 Dr. Mazhari categories this ‘golden period’ of the rationalist disciplines in the Madrasa curriculum into two phases—First phase begins with Qazi ‘Azud al-Din Iji (1355 AD) and the influence of his students and the second phase with Jalaluddin Dawwani (1501 AD) and the impact of his disciples. Thus, the main causes behind the prevalence of Ma’qulat-oriented madrasas in the then Indian subcontinent, as pointed out by Dr. Mazhari, were primarily these: gracious patronage of the Mughal rulers, detachment of the subcontinent from the epicentre of Islam, role of the esoteric movement, the rationalist intellectual heritage of the scholars of Iran and Transoxiana, Akbar’s inclination towards philosophy, and a mixture of philosophy in the Hindu tradition and Sufism.

Dr Usha Sanyal, a prominent American researcher on Madrasas and Islam in South Asia and a specialist in the history of the Ahl-e Sunnat movement during colonial India, was invited to share her reflections on the Banat madrasas (girls’ religious seminaries also known as Niswan) titled as “Navigating Tradition and Modernity in Muslim Girls’ Education: A Tale of Two Institutions”. Usha, who is also an author of a widely referenced book on the Barelwi movement (Devotional Islam and Politics in British India: Ahmed Raza Khan Barelwi and His Movement, 1870-1920), has empirically studied the phenomenon of women-centric Indian madrasas especially in Uttar Pradesh in her book “Scholars of Faith: South Asian Muslim Women and the Embodiment of Religious Knowledge”. 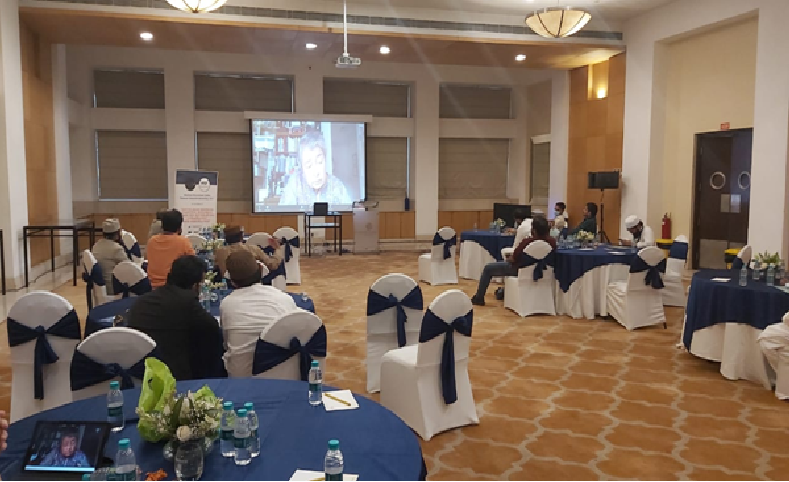 Based on her ethnographic fieldwork and a case study of girls’ madrasa in Shahjahanpur, western UP—Jami‘a Noor—Sanyal contended that the female-oriented institutions of religious education in the early 21st century were thoroughly ‘modern’ and that this modernity, reflected in both old and new interpretations of religious texts, allowed young South Asian women to evaluate their place in traditional structures of patriarchal authority in the public and private spheres.Of late, new institutions of Islamic learning for women and girls have emerged rapidly, not just in villages and qasbas but also in the urban areas and in the diaspora. “There has been a marked growth of girls’ madrasas of all Sunni schools of thought (maslaks) since the 1990s. This is the result partly of increased rates of female literacy both in the country and [especially] in UP (43% for girls in 2001, 59% in 2011, according to the government census). Partly, it is also the result of the economic liberalization of India, which led to reduced government investment in education. Muslims were forced to fend for themselves”, she pointed out.

Some of the important research questions that Dr Usha Sanyalposed in her purely academic conversation with the MD participants were as follows:

Is the Muslim religious education in South Asia “traditional” or “modern”?

How do South Asian Muslim women navigate tradition and modernity in religious institutions?

How does their increased religious knowledge impact social relations with their families and in society at large? 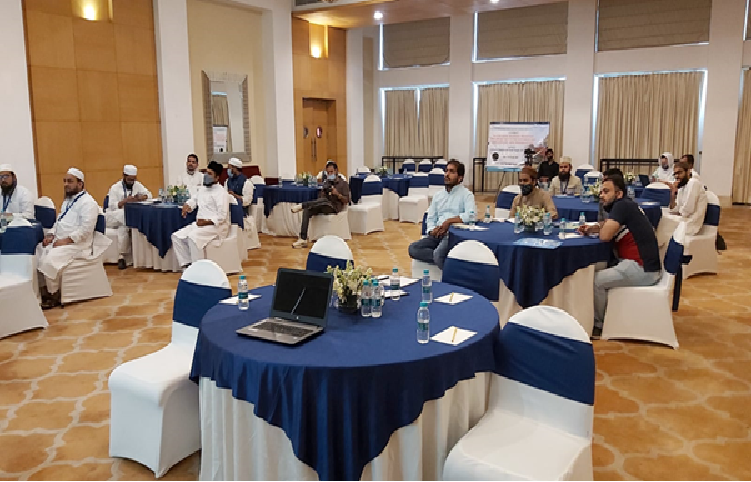 In her understanding, the modernity of Muslim girls’ madrasas today lies in their social impact. “The way the girls interact with their families and how they view themselves and their role in society changes as a result of their exposure to Muslim religious texts, to their teachers, and to other students from different parts of India”. Sanyal gave some examples from the Barelwi madrasa Jamia Noor in Shahjahanpur—that she studied from 2012 to 2018—to show how their religious education brings about small transformations in “everyday life.” At a time when a vigorous debate has been taking place in the anthropology of Islam about the role of “everyday life” in Islamic piety, Sanyal’s study finds that religious and social change take place in the mundane, everyday world, in small incremental ways. “Religion is not separate from the secular world, but the two are interwoven in multiple ways” she said.

Dr Arshad Alam, author of the book titled,“Inside a Madrasa: Knowledge, Power and Islamic Identity in India” was also one of the guest speakers in this onsite summer intensive. Revolving around his topic “Madrasas and Muslim Identity in India”, he spoke mainly from a sociological point of view and became critical in his reflections on the structural, institutional and administrative problems in many Madrasas across the country.Most established educational institutions around the world are running as corporations, but Madrasas, even in this day and age, are running as individual-centric institutions, not as corporations, something which prevents them from internalising creativity.

Dr. Alam also averred that the number of students enrolled in the Madrasas is often underestimated. It is incorrectly believed that only 4% of the Muslim community goes to study at madrasas, thanks to the reports such as the Sachar committee. In his estimate, around 20 percent of the Muslim students in India are enrolled in madrasas and maktabs. According to the Ministry of Minority Affairs, India has 24,010 madrasas, of which 4,878 were unrecognised, in 2018-19. Unofficially it is claimed that only one organisation, Jamiat Ulema-e-Hind has over 20,000 Deobandi madrasas in north India.

Lamenting the deeply-ridden internal issues and malaises such as the caste politics of the Mohtamims (rectors of Madrasas), control of the Ashraaf (upper-caste elitist Muslims) over these institutions and marginalisation of the Arzaal and Ajlaaf (lower-caste Muslims)due to the casteist fatwas and writings of several Ulama from Deoband and Barelwi orientations, Dr. Alamtried to show the way forward. But in the following Q&A session, he had to grapple with a set of reactionary questions and criticism from a few Madrasas graduates. Someone from Jamia Aarifia of Allahabad asked him as to why the modernist scholars like him only howl in pain at the sorry state of affairs in Madrasas and they themselves take no steps. To this, Dr Alam averred that critics have their own role but ultimately, it’s up to madrasa authorities to bring out the desired positive change. Responding to a similar question by another participant at the Madrasa Discourses, Dr. Usha Sanyal had also pointed out that there should be an organic reformation from within the Madrasa community with regards to the internal affairs and education, and that it’s a sole responsibility of the Madrasas themselves, and is not the role of outside scholars or thinkers.

Dr. Irfan   Ahmad, Max Planck Institute for the Study of Religious & Ethnic Diversity, delivered a talk on “Criticism and the Idea of Critique: An Alternative Perspective” which highlighted the need to ‘decolonize’ knowledge. In his elaborative presentation, his insights offered an alternative genealogy of critique (tanqīd-naqd) in Urdu and Islamic scholarship.

Examining works by Shamsur Rahman Faruqi, Gopichand Narang, Vazir Agha and others,Dr. Ahmad showed the rendition of criticism by them as only literary, secularist-secularizing and nationalist nationalizing — a process unleashed by colonialism. Likewise, his paper questioned the regnant view of ancient Greece as the birthplace of critique and its diffusion by modern Europe in non-West.

“Central to the alternative genealogy is the presence of critique well before Europe’s rise and the premise that God Himself is the source of critique, who sent prophets for reform (iṣlāḥ) and critique”, he pointed out.He also traced this genealogy through the Qurʾān, prophets’ lives, the community around Prophet Muhammad and the continuing practices of that non-dualistic form of critique in contemporary era.

Dr. Mahmood Kooria of Leiden University, the Netherlands & Ashoka University Indiadeliveredan in-depth online lecture titled, “Matriarchal Islam and Ulama: Discursive Traditions in Malabar and Lakshadweep”. In this talk, Madrasa graduates—perhaps for the first time—were acquainted with the matrilineal culture and customary laws in a sharp contrast to the patriarchal conceptualizations of Islamic Sharia, especially in the context of today’s Malabar and Lakshadweep. Connecting the Indian Ocean and Islam, Dr. Kooria explained how those who live by the sea follow Islam with an adherence to the Shāfiʿī school of law and with an allegiance to specific Sufi orders, especially the Qādiriyya and Rifāʿiyya.