First thing First. The attempts to link the Hijab/Niqab/Burqa to Radical Islam, is untenable and unjustified. It cannot be entertained as a logical assertion. In fact, such juxtapositions are uncalled for and are highly undesirable especially in the times of the growing ‘Islamophobia’ worldwide. 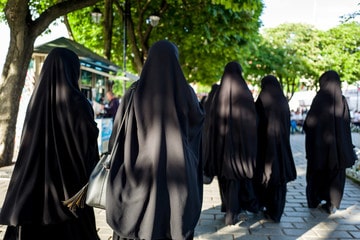 But at the same time, Indian Muslims women and especially those educated in modern Muslim educational institutions must understand that the full-face veil of any form is not an integral part of the established Islamic tradition. And these institutions were not prone to the Burqa culture in their formative periods, but rather they were cradles of the best indigenous Islamic practices. They have existed long before the advent of the Saudi-style Islam in the country. Burqa is much more based on an imposed foreign culture and not on religion. We must understand that the practice has not really existed in what we call the ‘golden age’ of Islam. It does have its origins in the Hellenistic and Byzantine Empire, and in some parts of Persia but not in the Hijab of present-day Saudi Arabia, which is the birth-place of Islam. In Iran, the Burqa culture among Shias gained momentum only after the 1970s revolution of Imam Khomeini which gave rise to the global Islamic identity politics and Islamist nationalism.

In fact, if we look into the existing practices of nearly all North African and Central Asian Muslim countries, they have had some strict laws to curb this identity politics of whatever origin. While in Morocco, the hijab has been seen as a sign of political fundamentalism against the secular government, so is the case in Azerbaijan since 2010 and in Tunisia since 1980. It was neither favorably looked up as part of freedom of religious expressions in the historic times of Turkey. In the largest democracy like India, a clearer message should percolate down as far as the Muslim women idenity crisis is concerned. And of course, Hijab or Jilbab should not be seen as stereotypical thinking. Muslim girls in Hijab, wihtout advocating for the Burqa, have excelled in different lawful pursuits in the country.

The established theologians of Islam around the world have debunked the untenable theological justifications around the full-face veil of all forms…….

According to reports, Switzerland will only allow women to wear it inside their respective places of worship and for “native customs”.  The Swiss People’s Party (SVP) has launched the proposal of the Burqa ban in public places. It has earlier held some processions and put-up posters that featured a woman in a black Burqa/Niqab with captions like “end extremism” and “fight against radical Islam” etc.

This writer has a worth-mentioning experience of spending some time in certain parts of Switzerland. To my utter surprise, Burqa-clad women are hardly seen anywhere in Switzerland, except in some parts of Zurich, Lausanne and Saint Gallen where Muslims from Turkey, Pakistan, and several Arab countries are staying as migrants and refugees.

It is not surprising as only five percent of the total Swiss population, which would be around 86 lakh people, are Muslims and they mostly come from Turkey, Bosnia, Kosovo and former Yugoslavia which themselves hardly ever had a ‘Burqa culture’. According to research by the University of Lucerne, almost no Muslim woman in Switzerland wears a Burqa or any full-face veil. The University of Lucerne has found in its recent study that the Burqa, Niqab or full-face veil is hardly ever worn in Switzerland, not to speak of any one advocating it. Even in the religious places like the Turkish Sunni mosques in Zurich, Berne or Geneva, or the Shia places of worship in Schlieren and Saint Gallen, fewer women wear burqa or full-face cover. Then what is the reason behind the sudden strong reactions of Muslim communities in Switzerland. They condemned the campaign against the Swiss ban on Burqa, describing the day it was discussed in the Swiss parliament as a “black day” for Muslims?

Tellingly, the newly-founded Islamic Central Council of Switzerland and the Association of Islamic Organisations in Zurich (VIOZ), the largest cantonal Islamic umbrella organization in Switzerland have expressed great concern over the Swiss vote that, they say, has “proved an increase in Islamophobia in Switzerland since the ban on minarets in 2009.” It is worth mentioning that the Swiss citizens, both Christians, agnostics and atheists, had voted on the proposal to ban the building of minarets when the SVP claimed the building was a ‘sign of Islamisation’.

In the wake of all this, a similar discourse on the whole issue has been renewed in India’s Islamic circles. Dr. Zeenat Shaukat Ali, a Prof. of Islamic studies and Saira Shah Halim, social and women rights activist, Jawed Anand and the Indian Muslim Secular Democracy (IMSD) have all weighed in. They propound that the full-face veil is not mentioned in the Qur’an, and that only head covering is Islamic or Qur’anic, and not the covering of full face for women. Also, in the earliest period of Islam, that’s is the Prophetic Age, called Ahd-e-Risalat, women were not clad in Burqa anywhere in the Arabian Peninsula.

Regardless of the actual reasons why many Swiss voters support the Burqa ban in their country, the fact remains that the Arabic-style Abaaya or the post-1979 Islamic Revolution Iranian Hijab or Niqab, which later transformed into what we earlier called “Burqa” and now “Burkha” in the Indian subcontinent, are not actually ‘Islamic’. All these have been imposed on Muslim women in different periods to pursue the pan-Islamic political ends. Hence, they can be, at best, seen today as different regional or ‘cultural’ practices in Muslim societies, and not as part of religion or as an essential part of the Islamic code of conduct. More significantly, it cannot be justified or juxtaposed with religion as one’s ‘personal choice’ or ‘freedom of religion’ under the large ambit of human rights in the modern democratic countries, from France, Switzerland to India.

In fact, some Muslim countries of higher Islamic authorities like Egypt, the cradle of Sunni Islam’s largest seminary Al-Azhar Sharif, Tunisia, which is a new regional epicenter of the evolving neo-Salafist theology, Azerbaijan, a progressive and modern Muslim nation in Central Asia, have either banned or introduced strict laws against the full face-coverings. Turkey, which had a little stricter law against the full-face veil, especially the Saudi-Arabic style, has only abrogated it now under the current regime of the aspiring global Islamist leader, Rajab Tayyab Erdogan. In Egypt, the full-face covering has been seen as part of the anti-regime political Islamist expression of resistance. The 1996 Fatwa issued by the then Grand Mufti of Egypt and Sheikh Al-Azhar, Sayyid Tantawi categorically stated that the full-face veil was not required in Islam, and has not been mandated by the Qur’anic verses related to Hijab or Jilbab.

But ironically, in India, most traditionalist Islamic theologians and Muftis are less aware of these established Traditions and Texts (Nusus) and are more abreast of the 18th century Fatwa documents like Fatawa e Alamgiriyya (compiled at the order of Aurangzeb), and Fatawa e Razawiyyah (of Maulana Ahmad Raza Khan). The reason is that the Mufti-making ‘ifta’ curriculum, which is around a 2 to 5-year course in the Sunni Madrasas has become what they themselves call ‘Sho’aba e Waqt Guzari’ (a department for ‘time pass’).

But on the other hand, the established theologians of Islam around the world have debunked the untenable theological justifications around the full-face veil of all forms. Busting the myth of Burqa/Burkha ʻAbd al-Ḥalīm Abū Shuqqah has elucidated in his well-researched Arabic book titled as, “Freedom of Women in the Prophetic Age” (تحرير المرأة في عصر الرسالة) that there was actually no imposition of the full-face veil in times of Prophet Muhammad (pbuh). He has ample proof from the Qur’an and authentic Prophetic Traditions (Sahih Ahadith) to buttress this point.

A rather radically new and thought-provoking narrative is that the un-Qur’anic patriarchy brutalizes the Muslim men more than their women, as it leads to the de-humanization of the whole community, especially the men as ‘guardians’ or ‘controllers’ (Qawwamun) of the Muslim society.  All in all, an emerging moderate Muslim thinking is that the Burqa culture in the Indian setting is part of deep-rooted religious patriarchy which has its origins in the Constantinople Christianity, the Byzantine theology or more conventionally and systematically in the Jewish Hassidic community, an ultra-orthodox sect which spread in the Europe with its birth in Israel.

In fact, what we need to address is the misplaced religiosity attached to the regional Arabic, Turkish or Iranian cultural and identity expressions disguised as ‘Islamic’ in the Indian subcontinent. Those who seek to revive the ‘actual’, ‘authentic’ or ‘puritan’ Islam in India–be they Salafis, Deobandis, Shias or some of the Barelwis—they all need to look at how Islam was best practised in India as an indigenous, vernacularized faith tradition which accentuated and enhanced the overall image and socio-economic status of Muslims in different periods.

But the current state of ‘purified’ Indian Muslims, largely churned out from the ultra-orthodox Islamist ghettos, traditionalist madrasas and Maktabs from Kashmir to Kerala are indicative of their religious, cultural and socio-economic decay. We need to trace the syncretic Indian Islam’s history from the 7th century Arabia to how it arrived in India through trade routes and a great deal of cultural interactions and inter-connections which evolved through the centuries to reach its present state—which we term today as ‘Indian Islam’.

Regular Columnist with Newageislam.com, Ghulam Rasool Dehlvi is a classical Islamic scholar and English-Arabic-Urdu writer. He has graduated from a leading Islamic seminary of India, acquired Diploma in Qur’anic sciences and Certificate in Uloom ul Hadith from Al-Azhar Institute of Islamic Studies. Presently, he is pursuing his PhD in Jamia Millia Islamia, NewDelhi