Inclusivism is described as being “all-embracing” to the people of other faiths, not in the theological sense (in accepting other religious beliefs) but in terms of one’s attitudes towards the religious “other” in society, and in social relationships and from an Islamic perspective, it is possible to uphold one’s own values without dilution to live in peace with the people of other faiths.

Inter-religious relations are discussed under the broad umbrella of religious pluralism, a widely used term with varied connotations. It is opposing discord as a necessary outcome of diversity and focusing on identifying the values and perspectives that integrate rather than separate. It’s a state in which religious communities develop patterns of participation, interaction, and relationship. It’s perfect for interacting with religious diversity, resolving religious disparities, and promoting social harmony.

With many schools of thought, trends and traditions, Islam is widely diverse in nature and due to which Muslims have differing perspectives about what it means to be a follower of Islam.

This diversity means that, at some level, Muslims have different views about what it means to be a follower of Islam. It also means that there will still be different voices among Muslims on important issues, such as inclusivism and exclusivism.

For an inclusive approach, several Quranic concepts and ideas are indispensable. The Quran, for example, is harshly critical of values, ideologies, and traditions of Mecca. It also warns Muslims against insulting other faiths, including the gods worshipped by Mecca’s polytheists (6:108). It also encourages Muslims to engage in gentle and respectful dialogue with members of other faiths. It implores Muslims to argue with the People of the Scripture in a better way (29:46) and encourage others to accept the Truth with wisdom and goodness (16:125). In order for social ties to function properly, Muslims should be equal, just, sweet, gentle, and kind-hearted when engaging with others (2:178, 3:159, 16:91; 55:60). 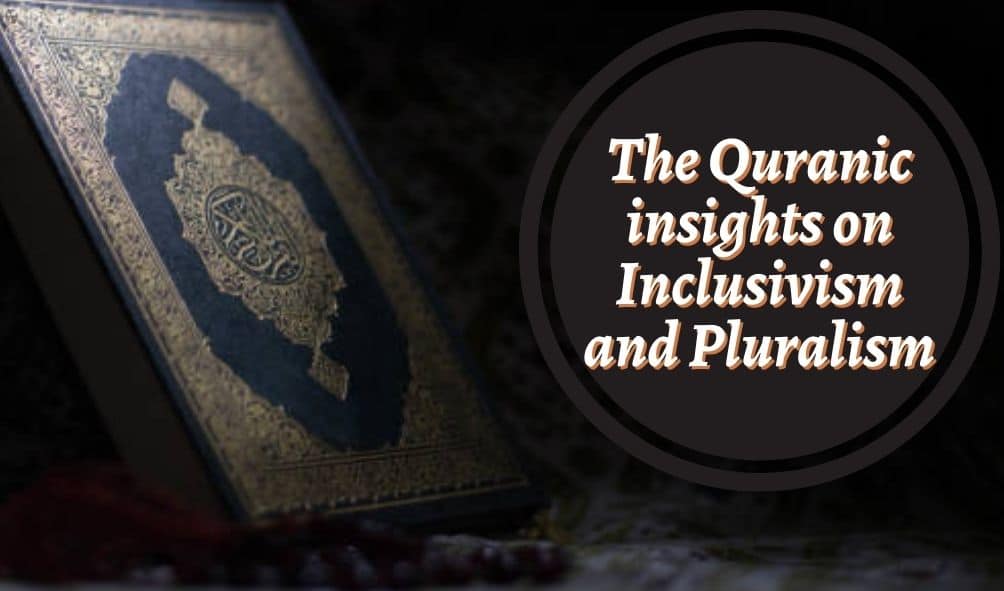 Many Quran passages, in addition to general guidance to Muslims, emphasise concepts that can be used to shape the roots of Islam’s inclusivism.

God, according to the Quranic genesis, is the God of the whole world and all life, including all humans. It asserts that all humans are members of one family (49:13), referred to as “children of Adam,” regardless of their race, language, ethnicity, or faith (17:70). It illustrates that throughout history, God’s unveiled faith has been centered on one core principle: that humankind should recognise and adhere to the One God (2:136).

It was also God’s intention, according to the Quran, for various faiths and forms to exist. God’s design has always had religious distinctions (5:48). The Qur’ān firmly declares that there is no coercion in matters of faith (2:256)

An increasing number of influential Muslim academicians and commanding Islamic institutions have voiced support for an inclusive approach to the religious “other” while holding theologically exclusive opinions, in accordance with the Qur’an’s inclusive stance. In a 2015 speech before the Majlis Ugama Islam, Singapura, the Grand Mufti of Egypt, Sheikh Shawki Allam, articulated his understanding of interfaith relations in the modern world, emphasising that despite differences that may seem to divide people of different religions, there are links, remote as they may appear, that connect all mankind, necessitating treating non-Muslims as we treat Muslims.

Tariq Ramadan, a well-known scholar of contemporary Islamic world and a proponent of Pluralistic society based his approach on the Quranic recognition that God purposefully formed religious diversity as per His will for the reason to know the other. While diversity increases the likelihood of confrontation, it also increases the opportunities for learning. He contends that actively engaging with the religious “other” has obvious advantages, including broader societal benefits such as the emergence of a new “We”, capable of working together to address all misdemeanours against human dignity.

Discriminatory practices against members of other faiths are no longer necessary or realistic in the contemporary world; rather, such attitudes contribute to increased hostility and discord among societies, which can be extremely damaging in the long run. For all communities seeking social stability and mutual change, a shift to a more inclusive understanding of the religious “other” is obviously required. Religious leaders and policymakers will need to reinforce that religious bigotry and injustice have little space in the contemporary world, and that social harmony necessitates going beyond intolerant attitudes toward religious “others,” who are members of the human family and worthy of dignity and religious liberty. Such a global perspective of religious ‘other’ does not require a disregard for theological differences, nor does it necessitate adherents to dilute their religious tenets or values. Rather, it entails the creation of an equitable inter-religious interaction. Such an approach is now practicable for Muslims too. In fact, the Qur’an features a lot of resources that can be used to promote such a strategy, as well as there is a growing corpus of scholarship to back it up.

The writer is a Research Scholar at BGSBU, Rajouri

Did the universe have an eternal past? Engaging with the Atheists' Arguments