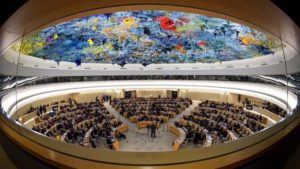 The HRC-43 adopted 43 texts, including one asking the High Commissioner for Human Rights to establish a fact-finding mission on Libya to document alleged violations and abuses by all parties since 2016, and another asking her to prepare a report on systemic racism against Africans and people of African descent by law enforcement agencies.

The 43rd session started actually on 24 February but it was suspended on 13 March because of the COVID-19. Thereafter, the same session resumed on 15 June and concluded on 23 June.

Michelle Bachelet, UN High Commissioner for Human Rights, said current world events required the attention of this high-level session of the Council, both in the short and long term. Although threats to human rights, development and peace were on the rise, so were the practicable solutions to these issues.

The Council also heard at the opening from Tijjani Muhammad-Bande, President of the seventy-fourth session of the United Nations General Assembly, and Ignazio Cassis, Head of the Federal Department of Foreign Affairs of Switzerland. During its three-day high-level segment, and in the course of the session, the Council heard statements from 101 dignitaries, including three Heads of State and two Deputy Prime Ministers.

The Council held on 17 and 18 June an urgent debate on current racially inspired human rights violations, systemic racism, police brutality and violence against peaceful protests. It heard calls from speakers for the Council to establish an international commission of inquiry to investigate systemic racism in law enforcement in the United States and other parts of the world.

The Council extended the mandates of the Special Rapporteurs on the situation of human rights defenders; on torture; on the sale and sexual exploitation of children; on the promotion and protection of the right to freedom of opinion and expression; on contemporary forms of racism, racial discrimination, xenophobia and related intolerance; on adequate housing as a component of the right to an adequate standard of living, and on the right to non-discrimination in this context; on the human rights of migrants; and on minority issues.

The mandates of the Intergovernmental Working Group on the Effective Implementation of the Durban Declaration and Programme of Action, andthe Independent Expert on the effects of foreign debt and other related international financial obligations of States on the full enjoyment of all human rights, particularly economic, social and cultural rights, were also extended.