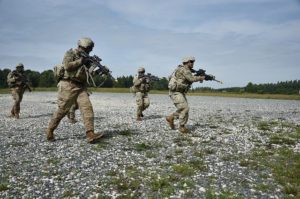 Talking exclusively to India Today TV at its Jammu home, the former J&K top cop said that all ways need to be explored to instill a sense of security within the Kashmiri Hindus minority group.

He also said that guns should be provided to community members, and gun training should be given to them so they can protect themselves from terror attacks.”By providing arms training and weapons, there’s no harm to the Hindu minority community and the vulnerable Muslim section in the Kashmir Valley,” former DGP SP Vaid told India Today TV.

He added, “Village Defense Committees (VDCs) can be formed in the Valley. However, thorough planning is required for this strategy. It is difficult to form VDCs in the Kashmir Valley but not impossible.”

After Kashmiri Hindu Sarpanch Ajay Pandita Bharti’s brutal killing, many displaced Kashmiri pandits have demanded that government arm the Hindus in the valley as they are soft targets for the terrorists.

In the early 90s, the area was infested with terrorism. SP Vaid said that later VDCs were established through a formal J&K government order in the Jammu division Chenab valley region where Hindus are in minority.

“After Kashmiri Pandits’ mass exodus into the Kashmir Valley, the terrorists then began targeting the Hindus minority in the Chenab Valley region of Jammu Division. Many minority Hindus massacres were perpetrated by terrorists in the Chenab Valley, but soon VDCs were formed, and individuals were given arms training. Muslims also became part of the VDCs, as they faced terror attacks as well. This strategy proved very successful and it stopped the mass migration of Hindus, “former DGP SP Vaid told India Today TV.

Oneness of God—The Basis of Brotherhood of Humanity