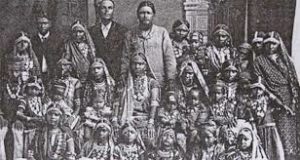 ho were the first Indians?  Where were they from? And was there really a massive migration from Central Asia by the so-called ‘Aryans?’ These are questions that haunted us in India, so much so that it has become quite an obsession within and out of the circles of history.

However, given the progress made by science and archaeology, are we any closer to discovering the answers in the area of genetics and data analysis? That’s the question that journalist Tony Joseph is trying to tackle in Juggernaut’s latest book ‘Early Indians.’ The book looks at a cross-section of research undertaken by scientists, archaeologists, and historians, investigating early migration to India. I spoke to author Tony Joseph about what made him interested in the subject, and whether all the research actually provided any answers.

For so long, you were a business journalist, what made you interested in prehistory and the quest to trace the story of the first Indians?

His book is a continuation of my journalistic voyage over the last three and a half decades. Prehistory has always fascinated me, especially the story of the Harappans. So when I started on this journey six years ago, I had a limited objective: to answer the questions about who they were, where they went and why it took us nearly a millennium and a half to see urbanism rise again in India after the decline of their civilization. But, as I explain in my book, as my research progressed, one question led to another and before I knew, the issue had morphed from ‘who were the Harappans’ to ‘who were we, the Indians’. It just so happened that precisely during the time that I was grappling with this question, genetic scientists in India and elsewhere where throwing new light on prehistory everywhere, and answering questions that had been left unanswered for decades. So that’s how the book came about.

You have likened the Indian population to a slice of Pizza – and you say that across the subcontinent the base is the same – referring to a common ancestry. How far does the base go back and what can we learn about the migrations – looking at it.Yes, just for the purpose of explanation, I used the example of a pizza. The base of the pizza refers to the first Indians, or the first modern humans who reached India around 65,000 years ago. This date is arrived at using both genetics and archaeology – genetics helps us arrive at the date of the Out of Africa (OoA) migration that led to the peopling of our earth as we see it today, and archaeology, including from southeast Asia and Australia, helps us arrive at the approximate period by when the OoA migrants would have reached India. It was not that once they reached India, they immediately spread all over the subcontinent. Rather, they did so in stages. Archaeologists call this the Indian Staged Dispersal, or ISD. Staged dispersal happened because, unlike the first modern humans in the Americas or Australia, and like the first modern humans in Europe and the rest of Asia, the first modern humans in India were faced with a robust population of archaic humans – or members of the Homo species who have now gone extinct. So, the first modern humans spread over the subcontinent in an opportunistic manner, avoiding contact with the well-settled archaic humans in the early periods. But by around 35,000 years ago, they had acquired new technology that involved using microliths and perhaps bows, arrows and spears, and become masters of the region. They either displaced or outlived the archaic humans in the subcontinent. The fascinating fact that we now know is that the ancestry of the First Indians is still predominant in India – almost all population groups in the country today carry somewhere between 50 to 65% of First Indian ancestry. This is quite unlike, say, Europe, where the ancestry of their first modern human population has dwindled down to single digits, with the exception of some countries in Northern Europe where the percentage is higher.

In India we have been obsessed with 2 questions 1. Whether the Harappans really migrated south after the decline to form the so called Dravidian populace and 2. Was there an Aryan migration – that brought with it a Vedic culture – Simplistic as these notions are, lets take them one by one. There have been some reports on the Rakhigarhi DNA tests – which have not been officially published. Based on the research you have studied what do we know of the Harappans? A 2018 paper by 92 scientists from around the world cutting across the disciplines of genetics, archaeology, anthropology and history, titled ‘Genomic Formation of South and Central Asia’, used ancient DNA evidence – which allows us to see how populations moved from one region to another over time – to show that before 2100 BCE there was no central Asian Steppe ancestry in populations of the subcontinent, and that there was indeed such ancestry after that period. Using ancient DNA evidence, we also know how the same central Asian Steppe ancestry shows up in Europe after 3000 BCE. To put it another way, we now have central Asian ancestry that is common in many regions that today speak Indo-European languages, including India, Iran and most countries in Europe. The Rakhigarhi DNA paper has not been released, but published interviews by scientists involved in that research assert that there has been NO sign of central Asian steppe ancestry in the Rakhigarhi DNA dated to around 2600 BCE. This is very strong support for the fact that the central Asian Steppe ancestry reached India much later, when the Harappan Civilization was on its last legs due to a long drought that weakened many civilizations around the world at the same time. We know that there is significant presence of central Asian Steppe ancestry in India today, and going by the interviews of scientists, we also know there was NO such ancestry in Rakhigarhi. So it is obvious that this ancestry arrived in India later, after the Harappan civilization started declining.

There is a confusion about whether the Indo – Europeans actually migrated en masse – or as some experts like archaeologist &nbsp; Dr Shinde points out – moved over a period of time into the subcontinent – What has your research thrown up?The evidence we have so far suggests migration over many centuries by many groups of Indo-European language speakers who might have taken different routes into the subcontinent. In fact, if we go by ancient texts, some of these groups were in conflict with each other. The last chapter of my book tackles this question and using linguistics and textual references suggests that the incoming Indo-European language speaking people from central Asian Steppes did not all have the same cultural practices and attitudes, and that these differences later reflected in their languages and cultural practices in different parts of northern and eastern India.

The problem about drawing conclusions is that we are still discovering sites. , being the most recent. Did you find it difficult to write this book given that there is so much happening both in terms of archaeological excavations as well as genetic research?There will be no point of time when new archaeological research into prehistory is not being conducted or new findings are not being released. This is true not just of archaeology, but of all science at all times. New evidence often reveals new details or new nuances. But the broad picture of Indian population as being constituted by four large prehistoric migrations is now supported by evidence from multiple disciplines: the OoA migrations starting from Africa; the west Asian migrations of agriculturists from around the Zagros region; the migrations of Austro-asiatic speaking farmers from southeast Asia; and the arrival of Indo-European language speaking pastoralists from central Asian Steppe. As more research is undertaken, I would expect there to be filling in of the finer details, from the routes and stages of migration to the nature of their early interactions and integration with existing populations in different regions of the subcontinent.

The biggest takeaways have been three. One, our study of history today is incomplete. Starting our history with the Harappan Civilization or the later, Vedic period (with many wrongly conflating the two) is problematic, because this ignores the earlier history of the First Indians who still form 50-65 per cent of the Indian ancestry. This is as distortionary as our neighbour to the west, Pakistan, ignoring its pre-Islamic history. To a great extent this was understandable in our case because we didn’t have good enough, concrete understanding of our prehistory earlier. But this is rapidly changing, due to both ancient DNA—based population genetics research and new research that is happening in other disciplines such as archaeology. So we need to change the way we see and study our history.

The second takeaway is linked to the first: we are more closely connected with each other than we imagine. Many people do not often see this, because their understanding of history makes them view the tribals as different from them in some fundamental way. We now know this is totally incorrect. The tribals share with the rest of the population much of their ancestry. We are all migrants and we are all mixed.

The third takeaway is that old cliche: unity in diversity. We live in a geographical region that can be termed a common civilizational and conversational area. The topics of our intellectual discussions, debates and disputes are uniquely our own, but we do not often have a consensual set of answers: our answers and responses are dependent upon the different traditions and historical experiences that different groups among us carry. The genius of our civilization, during its best periods, has been inclusion, not exclusion. The Harappan Civilization was built by a population with the shared ancestry of First Indians and the early agriculturists of the Zagros region of west Asia. Buddhism, which became the first philosophy in the world that felt the burning desire to share its insights and message of compassion with all humans, without regard for man-made or natural borders, drew its principles and practices from all parts of India’s previous history, including that of the ‘Aryans’, while challenging its rituals, sacrificial practices and ideas of hierarchy. That the Buddha’s message still flourishes, with 488 million adherents around the world trying to live up to the principles he enunciated, is testimony to the global appeal of a uniquely Indian philosophy, rooted in the same soil from which the Upanishads grew and drawing sustenance from the same impulses.