Maulana Azad’s pluralistic inclinations stemmed from a broader notion of Islamic mysticism well-imbedded in the established Sufi Islamic traditions. In fact, his deep faith in the religious pluralism and brotherhood of mankind was based on the popular Sufi doctrine of wahdatul wujud (unity of being). Therefore, he had great veneration for Indian Sufi saints who, as he himself asserted, inspired him to the very core of his being. Notably, he was greatly inspired by India’s forgotten Muslim mystic Hazrat Sarmad Shahid, who was executed by Emperor Aurangzeb for being charged with heresy. It is an irony that a divine mystic of such eminence is little known to the modern generations of traditional Muslims, thanks to the Salafi-Wahhabi and the like-minded cult of ulama who defamed him as ‘an agent of Jews among Indian Muslims’. 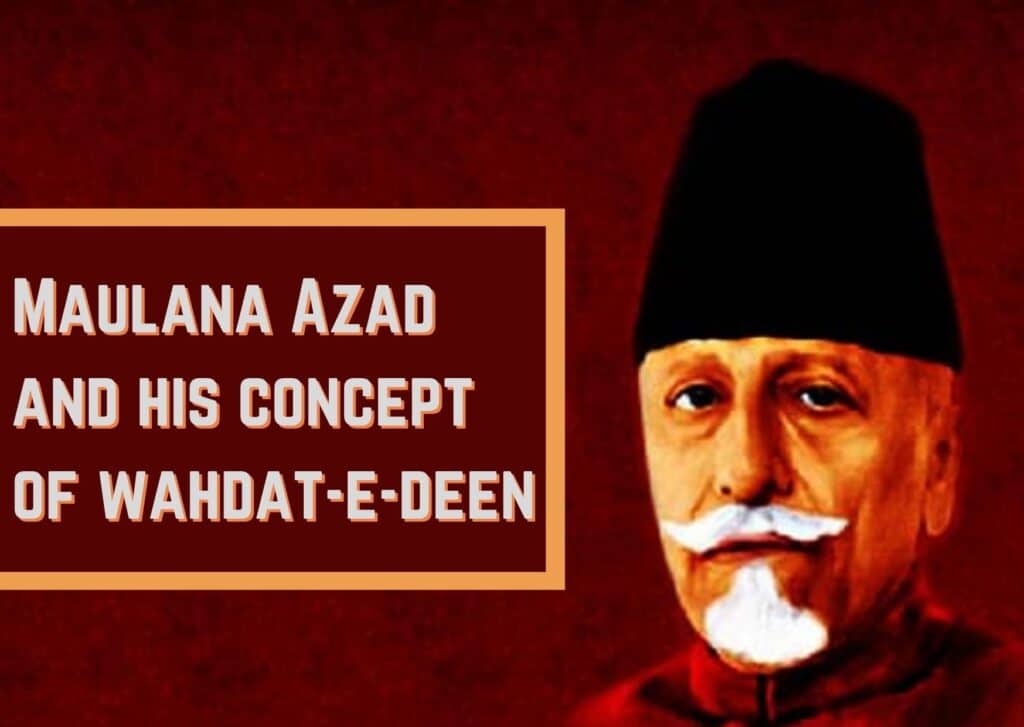 It is common knowledge now that Maulana Azad focused on wahdat-e-deen (unity of religion) embracing the essential and egalitarian messages of all religions. He propounded that the spiritual experience of religion cannot be discarded by reason. This line of thinking led him to disassociate with the modernist rejection of religious experience. But at the same time, he critiqued the conservative Islamic clergy’s lack of respect for reason and modern sciences. He wrote in an editorial in one of his most celebrated magazines, Al-Hilal:

“I am compelled to separate myself from the religious reformers of today at this point, while agreeing with their objectives and principles. Their position is that whatever traditions they find the least bit contrary to their self-made standards of reason, they are immediately anxious to reject…Why should tradition be rejected merely on this basis? Religious knowledge has its own standards for testing thought and tradition” …

In his fervent pronouncements of wahdat-e-deen or unity of religion, Maulana brainstormed novel ideas which were not familiar in the then religious and political arenas. Being a well-considered classical Islamic thinker, he emerged as an ardent advocate of wahdat-e-khudawandi (oneness of God) and akhuwat-e-insani (brotherhood of mankind). However, his position on wahdat-e-deen (unity of religion) was uncompromising as he succinctly put it in his famous commentary on the Quran Tarjuman-al-Quran:

“Wahdat-e-Deen is the central idea, but this does not mean that all historical religions as they exist today are true or that there is truth in every religion. Rather, the case is that all religions as originally delivered are true”.

Tarjuman al-Qur’an, a celebrated exegetic work that Maulana Azad left incomplete, was his last work. In this exegesis of the Qur’an, he exhibited a beautifully novel literary style in Urdu language. But much against his expectations, his exegeses could not win the hearts of many Muslims, even of those who greatly liked his other masterpieces. For, Maulana, in his explanations of several Qur’anic verses, attempted to find common grounds between Islam and other religions. This was something that a great number of Muslim clergy could not put up with. In Tarjuman al-Quran, for instance, Maulana Azad writes in his explanation of the famous Qur’anic verses 45:27-29:

“Despite the theological positions diametrically different from Islam, the Qur’an does suggest that there is hope for the salvation of Jews and Christians on the Last Day. Distinct communities will be judged according to “their own book” [Qur’an 45:27-29] and: “Those who believe [in the Qur’an], and those who follow the Jewish, and the Christians, and the Sabians, any who believe in God and the Last Day, and work righteousness, shall have their reward with their Lord, on them shall be no fear, nor shall they grieve” (Qur’an 2:62).

An eminent contemporary scholar of Islam and comparative religion, Professor Imadul Hasan Azad Faruqi (former director, Centre for the Study of Comparative Religions and Civilizations, Jamia Millia Islamia) did a critical analysis of Maulana Azad’s approach to the understanding of the holy Qur’an. He says that Maulana’s pluralistic and inclusive interpretation of the above Qur’anic verses could not appeal to a large number of Muslim clergy in India, who are well-fed with exclusivist and supremacist religious indoctrination.

The two most distinct aspects of Maulana Azad’s persona were his vehement opposition to the two-nation theory and fervent support to the national integration and unity among Muslims and non-Muslims of India.

He was a rare classical Islamic scholar or Maulvi who stood for the unity between Hindus and Muslims at that time. Remarkably, he was distinguished for his uncompromising stand that was antithetical to the two-nation theory. In one of his speeches, he spoke with a great conviction:

“I have considered the scheme of Pakistan as formulated by the Muslim League from every possible point of view. As an Indian, I have examined its implications for the future of India as a whole. As a Muslim I have examined its likely adverse effects upon the fortunes of Muslims of India” (India Wins Freedom, Maulana Abul Kalam Azad, Maulana Azad’s statement on Muslim issues in India, April 15, 1946).

Maulana Azad was as fervent nationalist and an ardent follower of Islam. He took great pride in both of his assets; his faith in the religion of Islam as well as his Indianness.  In 1940 in his presidential address to the plenary session of the Indian National Congress, he spoke highly of his belongingness to Islam as religion and India as nation:

“I am a Muslim and profoundly conscious of the fact that I have inherited Islam’s glorious traditions of the last thirteen hundred years. I am not prepared to lose even a small part of that legacy…I am equally proud of the fact that I am an Indian, an essential part of the invisible unity of Indian nationhood, a vital factor in its total make-up without which its noble edifice will remain incomplete. I can never give up this sincere claim. It was India’s historic destiny that its soil should become the destination of many different caravans of races, cultures and religions. Even before the dawn of history’s morning, they started their trek into India and the process has continued since.”

Unconditional love is the only cure for our society: Syed Mohammad Ashraf at Khawaja Gharib Nawaz Urs