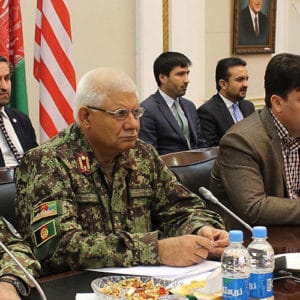 n Abu Dhabi this week, the United States and the Taliban have engaged in some of the highest-level talks between the two sides since the war began in Afghanistan more than 17 years ago. However, the attempt would prove almost certainly futile, for two important reasons. The Taliban aren’t willing for peace. And even if they were, the Afghan Government could not accommodate them.

U.S. Special Envoy Zalmay Khalilzad, who met with Taliban leaders on Tuesday, suggested that an agreement could be reached before April 20, when the presidential elections in Afghanistan are scheduled. He has definitely made more progress in talks than previous U.S. negotiators have and the fact that Pakistan’s Taliban leader seems to support U.S. efforts is a heartening sign. Without Pakistani protection and shelter it would be almost impossible for the insurgents to continue fighting.

However, as overdue as the peace talks are, they are premature too. The Taliban remains a jihadist movement in the structural and operational sense. In Northern Ireland, they have never developed a political wing akin to Sinn Fein and remain away from doing so for years. Under the core leader of the group, Haibatullah Akhundzada sits on a shadowy, largely Pakistan-based leadership committee consisting of a few dozen senior mullahs and their trusted assistants. Under this group are the various regional commanders who operate with a great degree of operational autonomy, with their respective fighters across Afghanistan.

Therefore, the bulk of the movement consists of militiamen who know only how to combat. Both the Taliban’s jihadist ideology, which calls for their imagined Islamic polity to be established by military means, and the fact that all of the group ‘s resources were spent waging an insurgency, have prevented the Taliban from moving beyond clandestine activity and developing a political capacity at the public level. They ‘re simply not ready to enter the existing constitutional Afghan system, much less to operate according to its rules. It will take years, if not decades, to build the necessary functional capabilities.

In any case, mainstreaming the Taliban will be difficult considering how fragile the so-called mainstream is in Afghanistan. The Afghan State remains a fragile polity marred by infighting after nearly two decades and a trillion-plus dollars of foreign spending. Political parties are dreadfully underdeveloped; factions revolve around regional personalities, not policies. The current administration is based on an ad hoc power-sharing arrangement between President Ashraf Ghani and CEO Abdullah Abdullah, put in place after the disputed 2014 presidential election results, as a stopgap measure. The deal expired in 2016, but the two men remain in office, delaying elections.

Even if the Taliban evolved somehow into a political movement, it would only exacerbate pre-existing tensions across ethnic, regional, tribal and political lines. Strongmen like Northern Tajik leader Atta Mohammad Noor and the recently rehabilitated Pashtun warlord Gulbuddin Hekmatyar are already leading rival Islamist parties. Add to the Taliban and this complex balancing act might collapse altogether. The Afghan state clearly lacks the coherence, and thus the capacity to contain the Taliban.

The reality is, the Taliban are not interested in being part of the current state. What they hope to negotiate is a road to power and legitimacy which does not entail any drastic change in behaviour.

The Taliban has been an armed group, pursuing control through insurgency, since its inception in 1994. The last time it came to power in 1996 was through a civil war between factions intra-Islamist. The Taliban launched an insurgency to force a US withdrawal after their regime’s collapse in 2001. The Taliban learned over the years that fighting their way to power was impossible again, and that 1996 was a fluke due to the chaos that occurred after the fall of the previous communist regime.

The Taliban also remember how Pakistan, along with Saudi Arabia and the United Arab Emirates, only regarded their former government as a regional pariah. The taliban don’t just want to return to their pre-9/11 status; they expect to be recognised globally as a legitimate national Afghan political party and their country’s rulers. That’s why the war of the Taliban — and now its attempts at peace — was aimed at forcing a negotiated settlement that allows the party to reclaim control by reforming the new constitutional system.

It is important that the U.S. recognize the limitations of what can be accomplished in current negotiations, so they are not manipulated by the Taliban. There is a significant discrepancy in timing between the U.S. need for a fast settlement in Afghanistan – there are already rumors that the U.S. may start withdrawing forces within weeks – and the political nature of the jihadists, which remains highly unpredictable. Washington should avoid the strategy it used to exit Iraq, rushing through a political settlement while leaving critical details to be determined later on. Doing so would only operate to the Taliban ‘s benefit, which is trying to achieve international recognition without meaningful change. Negotiations may sound tough; true peace will be even harder.

This column does not necessarily represent the editorial board ‘s opinion or that of Bloomberg LP and its owners.

Kamran Bokhari is a specialist in international policy based in Washington with the Professional Development Institute at the University of Ottawa and the Strategies & Programs Coordinator with the Global Policy Centre.