Few Muslims celebrate Merry Christmas today, especially in the contemporary Indian Muslim society plagued with Wahhabism, but almost all Muslims believe that Hazrat Eisa Alaihis Salaam (Jesus Christ PBUH) is not only a prophet (Nabi) but also an Apostle of God (Rasool Allah). 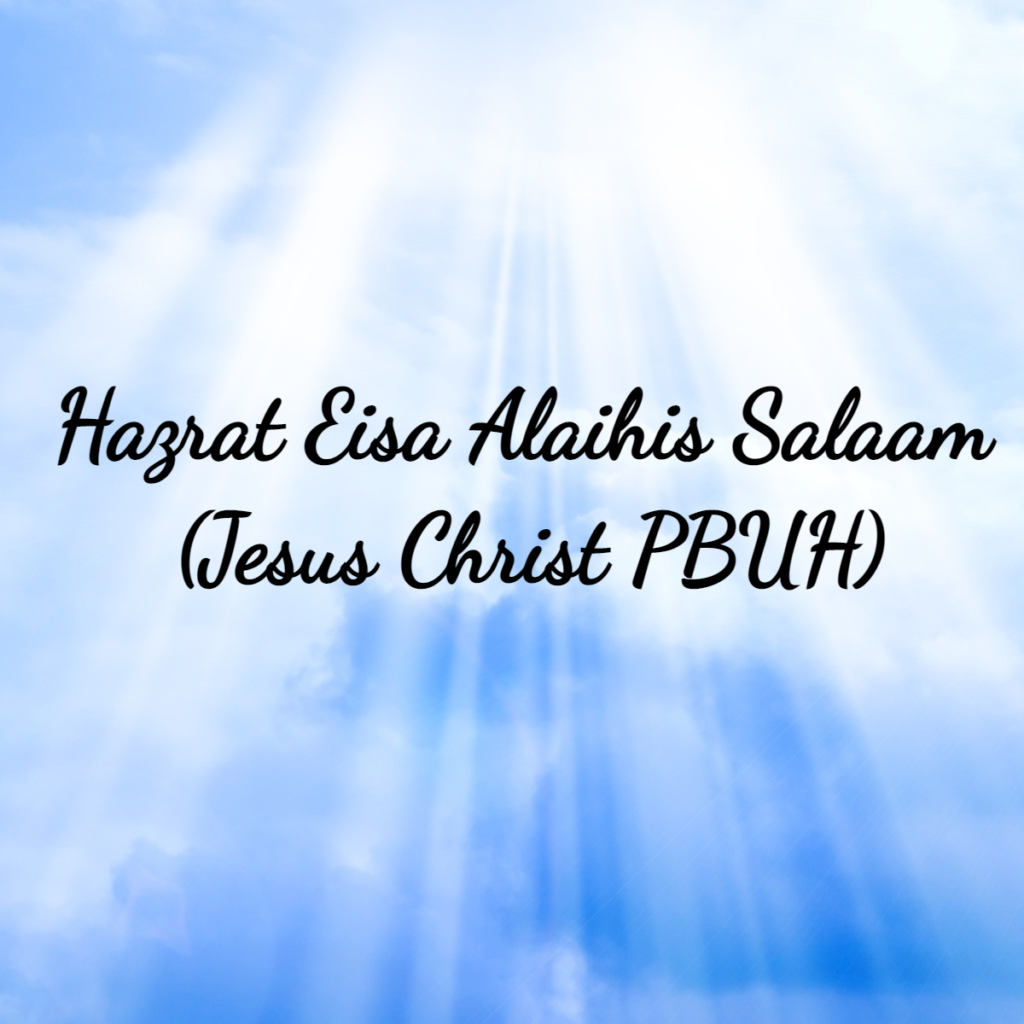 Most of them are also aware of the various holy Qur’an verses and authentic Hadith texts that speak so highly of the sanctity of Jesus and the historicity of his message. One of the Qur’an’s most significant and yet most forgotten verses is the one that describes Jesus, son of Mary (as) and quotes him as saying:

“And make mention of Mary in the Scripture. When she withdrew from her people to an eastern chamber, and choose seclusion from thine, and we sent Our Spirit unto her, and it assumed for her the form of a perfect man. She said: Behold! I seek refuge in the Beneficent One from thee if thou art God fearing (begone from me!). He said: I am only a messenger of your Lord that I may bestow upon you a holy son. She said: How shall I have a son when no mortal has touched me, and I am not unchaste. He said: So (shall it be). The Lord sayeth: It is easy for Me, and We shall make him a sign unto mankind, and a Mercy from us. And it is a thing decreed. And she conceived him, and she withdrew with him to a far place. (10: 16-22).

In other verses, the Qur’an highlights the attributes and miracles of Jesus Christ such as:

When God said, “Jesus, son of Mary, recall My favours to you and your mother. (Recall) how I supported you by the Holy Spirit, made you speak to people from your cradle and when you grew up, taught you the Book, gave you wisdom, the Torah, and the Gospel. (Recall) when, by My will, you made a sculpture of a bird out of clay, blew into it, and it turned into a real bird by My Will. (Recall) how, by My will, you healed the deaf, the lepers, and raised the dead. (Recall) when you came to the Israelites in the house with clear miracles and I saved you from their mischief, even though the disbelievers among them said, “This is obviously magic”(5:110)

Several verses like the above give us a distinct portrayal of Jesus Christ (pbuh) and urge that Muslims should have no problem celebrating Christmas as birthday or Milad of Hazrat Eisa Alaihis-Salam. But interestingly, even those who unfailingly celebrate and legitimise the Prophet Muhammad’s (PBUH) birthday as ‘Milad’ or ‘Mawlid un Nabi’ regard Christmas unlawful in their Islamic Shariah purview. Just a handful of Sufi divines such as Shaikh Hisham Kabbani or, for that matter, Islamic scholars such as Dr Tahir-ul-Qadri, who are a little open to interfaith dialogue, advise their followers to celebrate Christmas as an ‘occasion of festivity that marks the birth anniversary of Jesus Christ’. They emphasise that Muslims can strengthen their role as harbingers of the universal message of peace, love and harmony accepted by Jesus Christ by celebrating festivals such as Christmas, and thus can constantly and patiently address the challenge of Islamophobia, particularly in the Western world, despite the theological and doctrinal conflicts between Muslims and Christians.

But the common Muslims are largely unaware of the true spirit of reverence which the Qur’an displays towards Jesus (a.s) and his holy mother Mary or Maryam Alaihas Salam. Our local clerics and imams in India hardly tell the masses in their Friday sermons or on other occasions that there are authentic Hadiths (Prophetic sayings) in which Prophet Muhammad (pbuh) reportedly said that in his Prophethood (Risalat), he was the closest of all prophets to Jesus Christ (pbuh). Significantly, this Hadith report is narrated by both Imam Bukhari and Imam Muslim, whose compilation of Hadiths is considered the two most authentic of all, as the following:  “Both in this world and in the hereafter, I am the nearest of all the people to Jesus, the son of Marry. The prophets are paternal brothers, their mothers are different but their religion is one.” Even the Prophet’s companion Hazrat Abu Hurayrah reported him as saying that “I am akin to the son of Mary among the whole of mankind and though prophets are of different mothers, they all are of one religion, and no prophet was raised between me and him (Jesus Christ)”.

Thus, on the occasion of Merry Christmas, the aforementioned Hadiths remind us of the eternal divine instruction that all the messengers of Allah are deserving of equal veneration and their birthdays are of the same paramount importance, regardless of whether their messages are kept intact today or not. Since the Almighty sent them all to mankind to disseminate the same sacred message of God’s oneness (Tawhid), they all share a strong bond of prophetic fraternity. The difference, if any, as expounded in the Qur’anic exegesis, was not in their core teachings and socio-ethical and moral values, but in the offshoots termed as Shari`ah in Islamic terminology.

The common grounds enshrined in the Qur’an and Biblical scriptures highlight the essence of Jesus Christ’s core teachings as peace, tolerance, inclusiveness and love for all humanity. Thus, Muslims should attach equal amount of importance to the Christmas much like the Milad un Nabi (Prophet Muhammad’s birthday) in terms of their basic teachings and universal messages. Just as the Qur’an honours all prophets and messengers of Allah on the same footing, Muslims should retain this basic Islamic tenet on the occasions like the Christmas to rejuvenate the Qur’anic message of mutual and amicable esteem towards different faith traditions.

One way forward is that our Ulema and imams systematically embark on this noble task and enumerate the moving stories from the life of Prophet Muhammad in which he is stated to have shown ample reverence for people of other faiths, particularly Christians of Najran and Habsha. For instance, one of those reports goes like this: “The holy Prophet was sitting with a group of his companions and a Jewish funeral passed by, and the Prophet stood up to show his respect for the deceased. When some of his companions (Sahaba) asked him as to why he stood up for the funeral of a Jew, the Prophet replied: “Was he not a human soul?” Though this Hadith is very inspiring to tell and preach, one wonders why many Muslims, for instance in India, do not show respect to non-Muslim funerals like Arthi and funeral rites like Antyesthi (the last rituals of the dead in Hinduism) when the Prophet himself showed it towards the Arab non-Muslims–Jews and Christians.

In India, over the post-colonial decades, Christian-Muslim relations have been, by and wide, peaceful and non-confrontational. But now, on the grassroots stage, Muslims need to open up more opportunities and channels for more authentic scriptural dialogue and shared understanding. Educational centres should be gateways to this dialogue, from Madrasas to schools and colleges, to ensure that Muslim children and young people establish brotherly relations with their non-Muslim peers and create more friendly feelings towards people of other faiths and beliefs.

In addition to religious radicalism, violent extremism and sectarian struggle, Muslim countries, especially the Gulf region, which has been devastated by severe gender injustice in recent years, are now striving to ensure gender equality. Significantly, in the Gulf countries, where there have been a multitude of studies on harassment and abuse against women, gender equality is gaining ground. In terms of gender disparity, the GCC has historically been behind other regions. But that is now shifting rapidly, with countries like the UAE leading the way. A clear case in point is the recent consensus of a group of international experts that took part in the SALT Conference in Abu Dhabi that women’s empowerment and employment in the Gulf countries are likely to increase in order to reap economic rewards. The prediction is that virtually every Gulf nation would be raised to the best regional level for women’s workforce participation by 2025, which would add approximately $180 billion to the size of the combined economy of the bloc, while $830 billion will be added to complete gender parity. This is going to be a tangible and unprecedented push in the Islamic world towards gender equality.